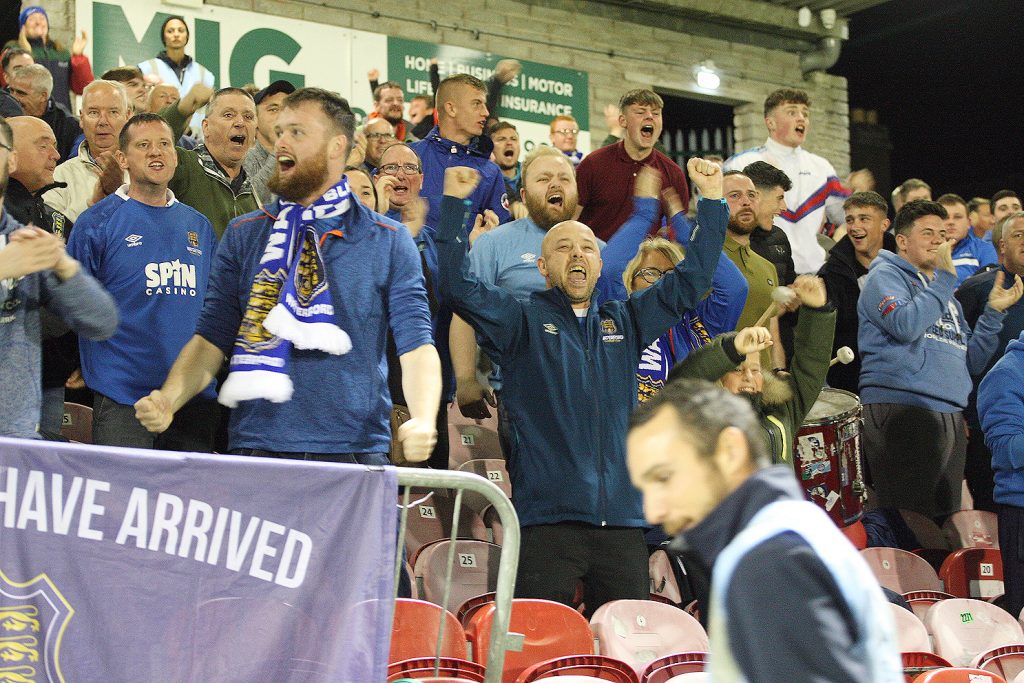 It was an incredible night at Turner’s Cross on Monday last as Waterford FC picked up the most unlikely of much needed wins this season when they came from behind to defeat Munster rivals Cork City in the SSE Airtricity Premier Division for a third time this season.
After Zack Elbouzedi struck for a late winner against City in the Blues’ previous visit to Leeside, it was Maxi Kouogun and Walter Figueira that came up trumps in these final minutes in what will go down as a smash and grab win for Alan Reynolds’ side.
They trailed at the half-time break through a Daire O’Connor strike and it has to be said that it looked as if the Blues wouldn’t find that equalising goal in the second period, but a never-say-die attitude, something that was missing in recent weeks, saw an amazing finish with Figueira netting the winner in injury-time.

EARLY CHANCE
The Blues should have scored with their first attack on four minutes when Kevin Lynch sent over a cross from the left that saw Shane Duggan and John Kavanagh combine on the right-side of the area, but the former dragged a right-footed shot wide of the far post from 12 yards.
Dan Casey had a chance to put the hosts in front on 12 minutes when the centre forward peeled off his marker to meet a cross from Josh Honohan, but his header just went inches over Matt Connor’s crossbar.
Dean O’Halloran went close for the Blues at the other end sixty seconds later when Walter Figueira won a corner out on the right that saw Duggan whip in a great delivery to the back post where George Poynton knocked the ball down for the former Fulham man, but his shot was deflected wide.

FIRST BLOOD CITY
After coming into the Cork starting team in place of regular keeper Mark McNulty, Tadhg Ryan showed his class when making a top save to deny Waterford the lead on 22 minutes when JJ Lunney released Figueira down the right, but his cracking shot was tipped around the post.
It was the home side that did get their noses in front when they broke the deadlock three minutes later when Eoghan Stokes had a goalbound shot blocked out for a corner that saw Daire O’Connor pick up the ball 20-yards and he arrowed a shot that found the net with the aid of the crossbar.
Blues keeper Matt Connor made two superb saves in the space of a minute to keep his side in the game on 55 minutes. Karl Sheppard sent in an excellent right-wing cross that picked out Mark O’Sullivan, but his cracking header was tipped over before O’Sullivan got on the end of the resulting Shane Griffin corner that somehow the netminder managed to keep out.
The hosts could have doubled their lead on 66 minutes when Sheppard took a pass from Eoghan Stokes before firing a ball across goal that went under the arm of keeper Connor, but Rory Feely was on hand to clear the ball out for a corner.
A mix up between Feely and Maxi Kouogun that gifted Eoghan Stokes a chance soon afterwards, but he was denied by a fine Connor save before the Blues went close on 73 minutes when Cory Galvin brought a fine save out of Tadhg Ryan.

DRAMATIC FINISH
Karl Sheppard was just inches wide with a free header after a Stokes delivery into the area two minutes later before Michael O’Connor brought a great save out of Ryan on 80 minutes when he let fly from 25-yards after taken a Poynton pass, but his effort was turned around the post.
Waterford did grab an all-important equalising goal two minutes later when Shane Duggan found some space for himself out on the right before crossing into the six-yard box where Maxi Kouogun was on hand to power a close-range header past Tadhg Ryan.
With fourth official Graham Kelly indicating three added minutes, the Blues weren’t just happy with a point as they pushed for a winning goal and it duly arrived once again. Michael O’Connor was the man that set up Georgie Poynton on the right-side of the area and he showed great vision to spot the unmarked Walter Figueira, who had the simplest of tasks to finish to an empty net.
It sent the Waterford fans at the St Anne’s end of Turner’s Cross into wild celebrations as the Blues struck for another injury-time winner, for the second time this season against their Munster rivals, as the chant “There’s only one team in Munster” echoed around the famed venue at the final whistle. Robbery some might say! But we’ll take it.