Eastern football semi-finals down for decision 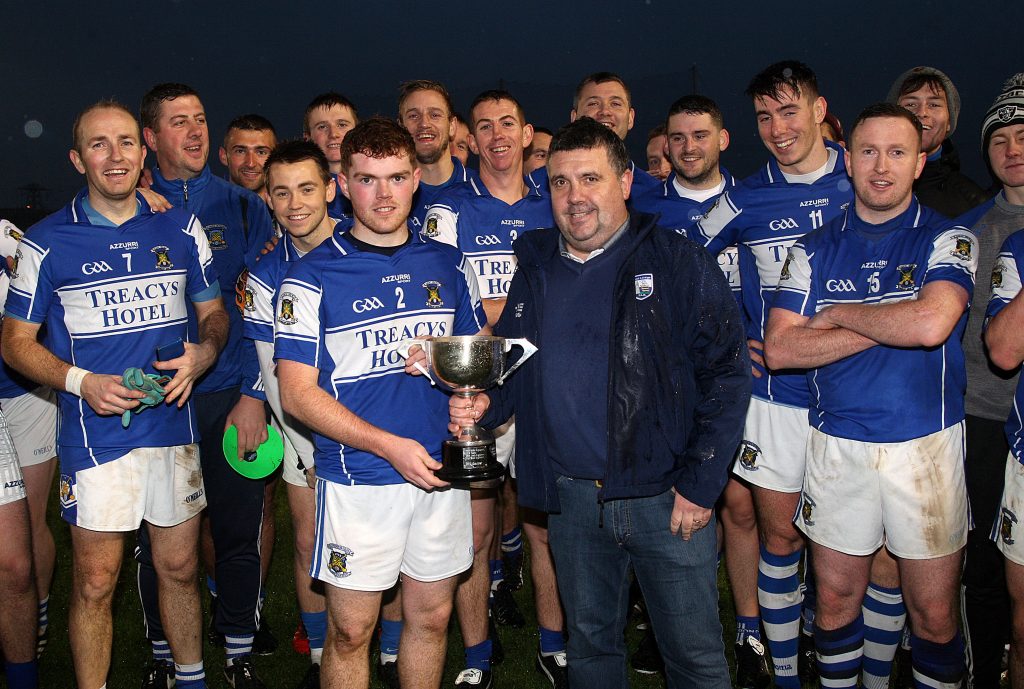 Mount Sion continue the defence of their Eastern JAFC title with a semi-final clash with Ballyduff Lower on Friday night. Photo: Jim O’Sullivan.

The penultimate stages of the Eastern Premier Football championships get under way this coming weekend starting with the Junior A football semi-finals on Friday evening at the separate venues of Kill and Fenor.
In Kill John Mitchells, back in Junior Football for the first time in many years, take on a Dunhill side that opted down after competing in Intermediate up to 2017. The Mitchells reached this semi-final on the back of a sensational comeback against Roanmore that saw them overturn a 0-8 to 0-2 deficit going into the closing minutes when a flurry of late goals from Anthony Raher, Bill Ridguard and Johnny Kavanagh shot them to victory on a score of 3-5 to 0-8.
In their game Dunhill were hard pressed to come through on a score of 2-6 to 1-7 against Ferrybank. Dunhill are flying at the moment in the Intermediate hurling and it is their fitness that should see them over the line here.
The second semi-final between the current champions Mount Sion and former champions Ballyduff Lower takes place in Fenor and based on Sion’s 3-20 to 1-2 annihilation of St. Mollerans on Tuesday last they should be favourites going into this game.

Attractive Intermediate Double Header
Tony Kirwan Plant Hire Eastern I. F.C. Saturday Next at Walsh Park
2 p.m. St. Saviours V Newtown
3.45 p.m. Tramore V Kill
St. Saviours came through the Group stage of this championship unbeaten having scored a 1-15 to 1-6 win over Saturday’s opponents Newtown along the way. They were in the same position at the end of last year’s Group series but crashed out to Bunmahon in the knockout stage. They will be taking nothing for granted against a very fit Newtown side bidding for a Junior Hurling/Intermediate Football double.
Newtown came through to this semi-final on the back of an impressive quarter final win over De La Salle and they will be going into this game with nothing to lose. They have capable footballers in such as Andy Hubbard, Ger Dunphy, Conor Flynn, Conor Burns, Paul Cummins, Darren Long and Luke Foran and will make the favourites work for their victory.
Saviours will be going all out here and with players like Kevin Boland, Peter Crowley, Jack Flavin, Darragh Corcoran, Mickey Merrigan, Shaun Corcoran, Brian Power and Joey Phelan on bard they should have the edge to take them through to the final.
In the second game in Walsh Park Kill will be seeking to turn the tables on a Tramore side that has already beaten them this year on a score of 2-9 to 0-7. That eight point deficit might appear a lot to make up but Kill are a much improved side from that game and were particularly impressive when running Saviours to a single point in their final Group game before going on to score a 4-5 to 1-8 win over Bunmahon in the quarter finals.
Kill have a strong backbone to the side in players such as Peter Casey, Jim Halley, Mikey Nicholls, Ben Kirwan and Niall Hennessy and up front they have two of the best young forwards in the county in Ciaran Kirwan and Corey Kennedy.
Tramore are a club that has been punching below its weight for a long time and this year they are making a serious effort to get the club back to where it should be, in senior ranks. They have put together some impressive performances this year and will be facing into this game with confidence based on their previous result against the same opposition. They will not find it quite as easy and will again be looking to Richard Hickey, William Cullinane, Craig Burke, Mattie Thompson, Martin Whelan, Niall Kennedy and Tony Whelan for big performances to see them through.
Expect a close competitive game here with Tramore scoring a narrow victory.