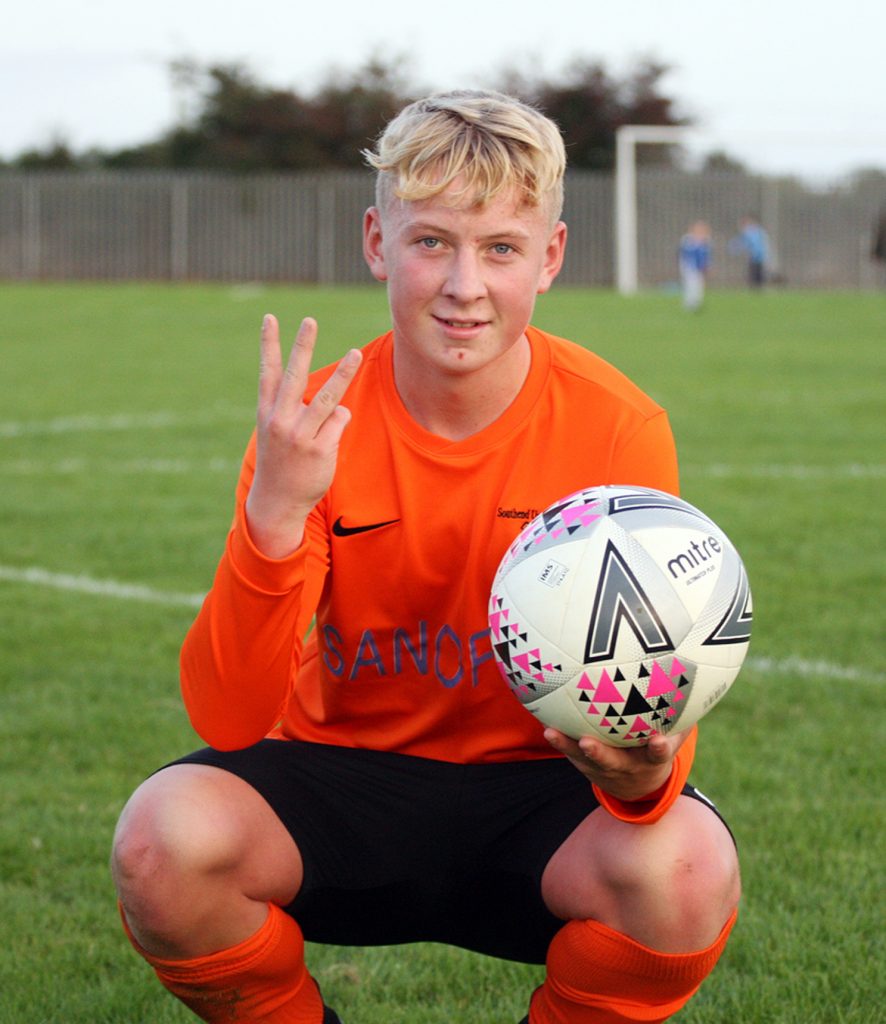 WSFL Under 15A League

After striking for the opening goal of the new WSFL Under 15A League season within in the first minute, Southend United failed to look back as a first half hat-trick with the aid of a strong breeze from Calum Flynn gave them the advantage against Villa in their clash played at Southend Park on Wednesday last.
Flynn scored the opening inside 52 seconds and after adding twice more before the break, it really put the hosts in the driving seat and although Villa did pull a goal back early in the second half, they couldn’t peg back their opponents.
With a breeze blowing straight down the field, it favoured Southend in the first half and from the kick-off, it was Redeem Eddy that took possession of the ball in the middle of the pitch before putting the ball behind the Villa defence for Calum Flynn to race onto the ball and he held his nerve to hammer a shot past keeper Joe Hogan.

HAT-TRICK HERO
The home side doubled their lead on 13 minutes, and it was Flynn once again that done the damage when he took a pass from Peter Ellickson and after beating the offside trap, he cracked a left-footed shot to the net from inside the penalty area.
Shane O’Sullivan had a chance to extend his sides advantage on 22 minutes when he latched onto a through ball from Jack Twomey, but he drilled his shot across the face of goal before Peter Ellickson set up Redeem Eddy soon afterwards only to flash a shot over the bar.
Villa could have pulled a goal back on 26 minutes when Charlie Whitty picked up the ball on the left-side of the penalty area after a quick free from Harry Sharpe, but his effort went wide before Southend added a third goal just sixty seconds later. Hayden Power picked up possession of the ball just outside the penalty area before playing the ball forward for Flynn, who nipped in past the Villa defence before he beat keeper Joe Hogan with a neat left-footed shot from 16 yards.

GOOD EFFORT
The Connor’s Park outfit had the aid of the conditions for the second period and it was Southend keeper Simon Burns that made a brilliant save to keep his side in the driving seat on 39 minutes when Josh Hegarty played the ball to Conor McCabe, but his cracking shot was tipped over the bar.
Tosh Cleary’s side did grab a goal sixty seconds later when Baasit Ishola laid the ball into eh path of McCabe and this time the centre forward made no mistake whatsoever when powering an unstoppable shot past keeper Burns from 12 yards.
Callum McFadden was denied by an excellent Burns save on 52 minutes when he took a pass from Tom Spain before letting fly with a stunning strike that saw the ball tipped over the bar before Conor McCabe had the final chance on 68 minutes when his header after a Harry Sharpe cross went wide.