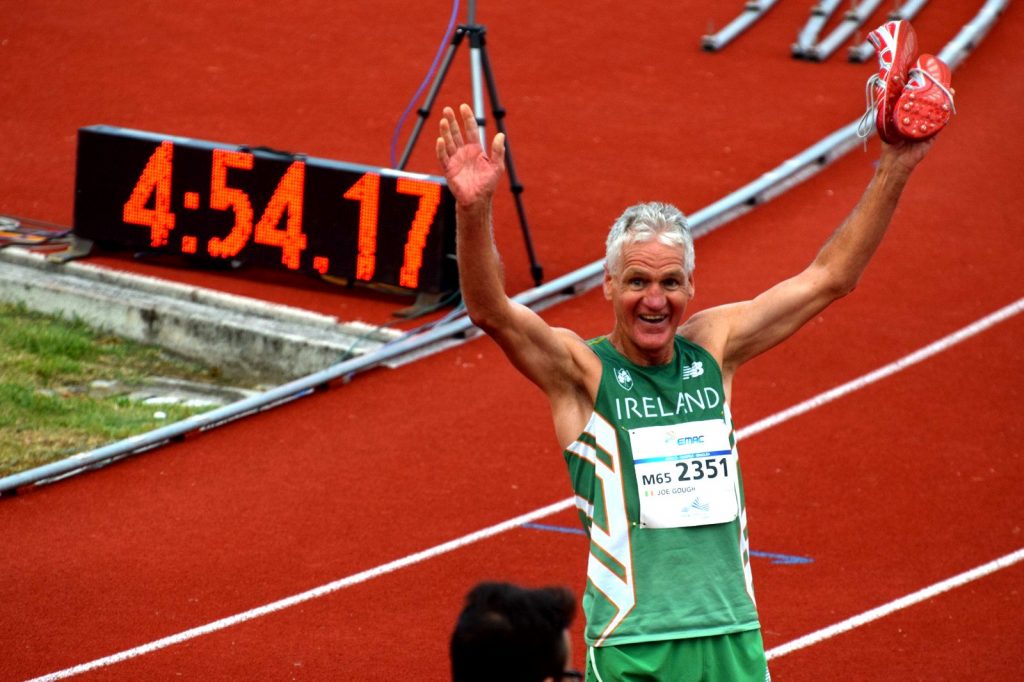 Once again, like so many times in the past Joe Gough West Waterford has come up trumps at a Major Master’s Championship. In Venice last Saturday in the European Masters O-65 1500 metres final he had a thrilling victory in 4 minutes 54.14 seconds,just over one second in front of another well known and frequent Irish winner from Dundalk Brian Lynch timed at 4.55.21 and Boyen Lefterov Bulgaria was inches behind Lynch in third position in 4.55.40.
It was a very gutsy performance by Joe who had to call on all his great resilience to emerge victorious. On Thursday Joe finished third in his semi final easily qualifying for Saturdays final. This coming Wednesday Joe runs in the semi finals of the 800 metres in Venice with the final on Thursday and again he is expected to figure very prominently as he goes into the event with the fastest time this year. Lynch is also entered he still holds the1500 metres O-60 World Record.

World Championships
At the time of writing our own Thomas Barr in the 400m Hurdles, Ciara Mageean in the 1500m and Alex Wright in the 20k Walk have been selected to compete for Ireland at the 2019 IAAF World Championships in Doha, Qatar from 27th September to 6th October, having achieved the entry standard during the qualification period. They join Brendan Boyce
50km Walk and Stephen Scullion Marathon who were selected on May 27th at the end of the qualification period for their respective events. The qualification system for the 2019 World Championships also involves a ‘quota’ system with a target number of entrants set in each event, regardless of entry standards. Invitations from the IAAF for further Irish athletes to compete in Doha are anticipated in the coming week.
Athletics Ireland will confirm further selections to Team Ireland upon receipt of IAAF invitations Thomas Barr is busily preparing , for the Championships and presently all is well and he will not race until Doha, his first round is on Friday September 27th if progressing semi final is the following day and if progressing the final its on Monday September 30th

Road Races in September
The Dara Fitzpatrick Memorial Run over 5 km is on Saturday next 14th at Waterford Airport,10am and please note runners only, due to time restrictions on the Airport.
The Eurofins Half Marathon on the Waterford Greenway is also on Saturday at 9 am, with entries closed. It starts at Coach House Kilmacthomas and will finish in Ballinroad.