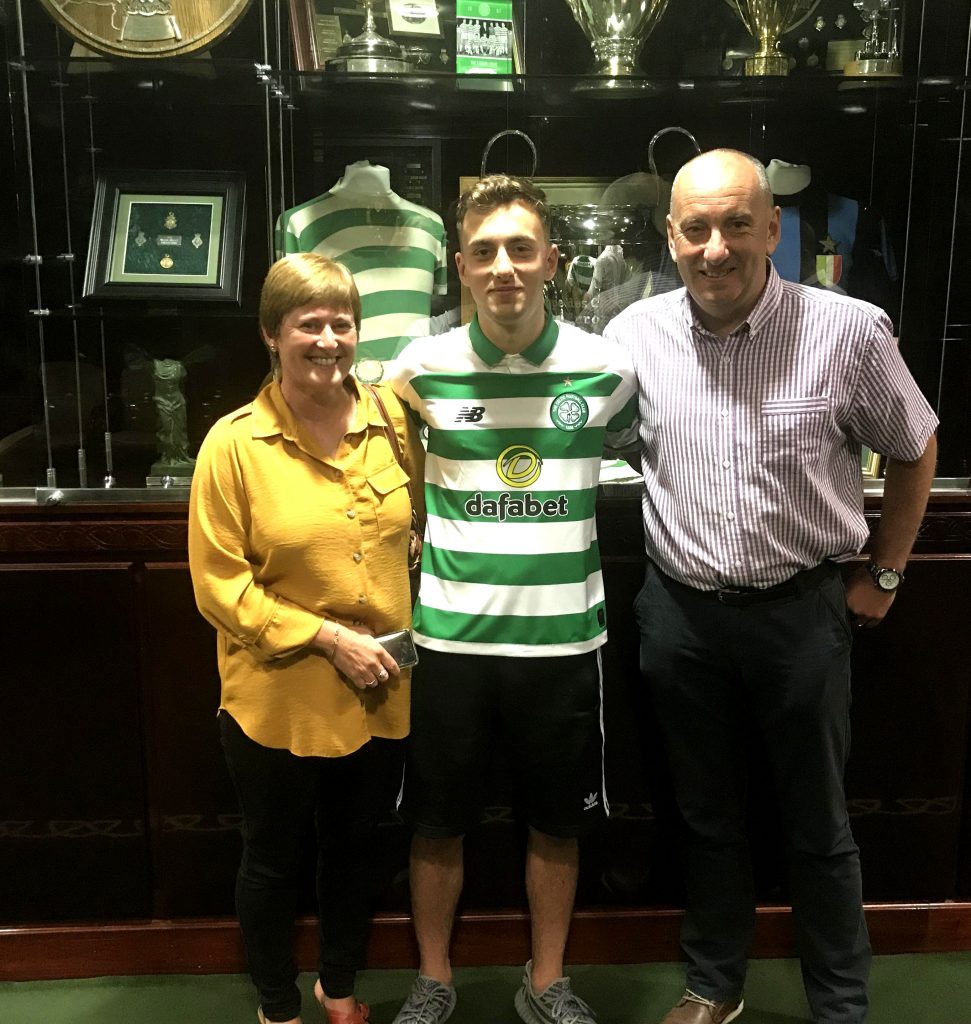 Waterford’s Lee O’Connor in the trophy room in Celtic Park with his parents Ann and Noel after signing for Glasgow Celtic.

It was a long day for Waterford native Lee O’Connor on Monday last after the talented defender made a big career decision to make the permanent move from Manchester United to join Scottish giants Celtic on a four-year deal just hours before the Scottish transfer deadline ended.
O’Connor played for Manchester United in their 2-2 draw with West Ham United in the Under 23 League on Friday last before the Red Devils accepted a bid from Neil Lennon’s side to make the move up North on Saturday lunchtime.
After Celtic had shown interest in the Republic of Ireland Under 19 captain in the middle of last week, it’s understood that United turned down two initial offers for the versatile player before finally agreeing to an improved offer at the weekend.
With O’Connor set to join the Republic of Ireland Under 21 side for training ahead of last Friday’s Euro Championships clash with Armenia at Tallaght Stadium, he sought permission from manager Stephen Kenny to instead take a flight to Glasgow to complete his move to Celtic Park.
After arriving at Dublin Airport with his proud parents Ann and Noel, O’Connor spoke to Celtic manager Neil Lennon before boarding a flight to Scotland where he underwent a medical and then put pen to paper on a four-year deal with the club.

SURREAL MOMENT
On arriving to Celtic Park, O’Connor was unveiled as Celtic’s latest Irish signing just before the midnight deadline before he was given a tour of the famed stadium along with his parents and after spending a night in Glasgow, he boarded the first flight back to Ireland to link up with the Irish Under 21 squad at Abbotstown.
After originally signing for Manchester United on a three-year deal, O’Connor was part of the first team squad for a number of games and was included in their Champions League squad for last season’s trip to Barcelona, but after failing to feature recently, he made the decision to seek first team football.
Speaking on his move to Celtic, O’Connor said, “It’s been a long day, but I’m just glad to get it all sorted out before the deadline and I’m delighted to be starting a new chapter in my career. It feels surreal at the moment but I’m just looking forward to getting the international break over with and then starting with Celtic.
“I found out last weekend about Celtic’s interest, and it went from there. Today was a bit hectic but I’m just glad to get it through before the window shuts. I have been to Celtic a few times in the past and now I’m just looking forward to a new chapter in my career here.
“It’s a busy time for me at the minute especially having to look forward to the two games with Ireland and obviously on the back of the Toulon tournament in the summer and the Under 19 Internationals in Armenia, but it’s also exciting times.
“I suppose as everyone knows back home, I just want to try do my best now here at Celtic and see where it takes me. Playing at Manchester United was a brilliant experience, but this decision to move was to further enhance my career and try get some first team football.”

BIG CLUB
“I’m lucky enough to know a couple of lads here at Celtic and being friends with Jonathan Afolabi and Barry Coffey helps. When I heard that Celtic were interested the weekend, I spoke to Johnny and he told me about how people made him feel welcome, how well he settled in and how much he likes it here.
“That probably helped me ultimately make the decision to move here. Celtic are a big club and a club that I’ve probably supported. I just want to get started, work hard and give it my all, and hopefully the manager and all the staff will see why they’ve brought me here and I can make an impact.
“Walking through the Celtic Park tunnel, even in an empty stadium, I just want to run out on to the pitch, but I’ll just have wait and see what happens. It’s been a surreal week, but I’m really happy to be here and really proud as well.”

SEAL OF APPROVAL
Republic of Ireland Under 21 manager Stephen Kenny expects that O’Connor will flourish if he is given the opportunity at Celtic after his move from Manchester United just before the deadline expired on Monday night last.
Commenting on the move, Kenny said, “It caught us all by surprise really. He rang me on Saturday night to see if he could have permission to miss Monday’s training. It’s not a bad reason! He’s been great for us. Lee is the most capped player we have in our ranks at underage level.
“He has every opportunity now to break into the first team and he’ll prove his worth over time. He’s really quick, has good defensive instincts and he likes to raid. Lee has a great attitude and great energy. We wish him well. We’re delighted to have him. He’s undoubtedly our first-choice right-back and hopefully he can have a good few days now with these two qualifiers.”