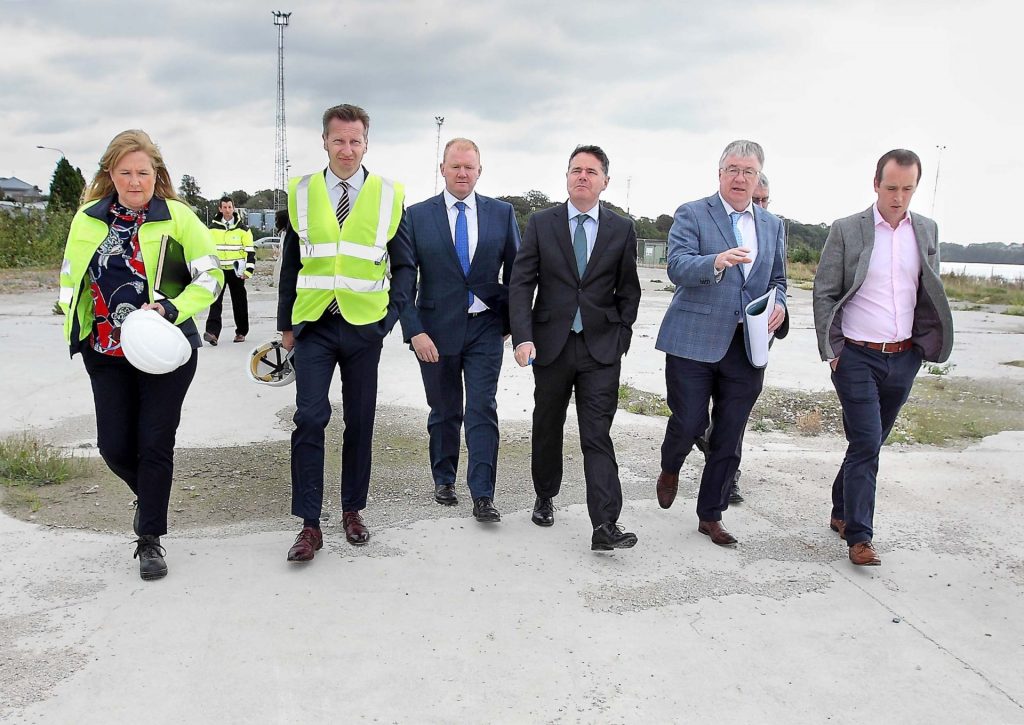 Minister for Finance Paschal Donohoe is given a tour of the North Quays last week.

BY the time this appears the decision on the location of the new Garda divisional HQ may be made. Anyone who has looked at the geography, location of pathology resources and acute hospital services, demographics, sociology, population or crime statistics for the area will be absolutely convinced that the location should be Waterford. The case is so overwhelming that you can safely assume, if the case goes against Waterford, that high political influence of the worst kind is at play. This is a case when even the Carlow/Kilkenny politicians and John Paul Phelan in particular (he who has clearly stated on WLR that Waterford is the capital of the region) should have insisted for policing purposes that the HQ should be in Waterford.

As usual Kilkenny politicians denied all lobbying and all influence while they believed the HQ would be in Kilkenny. Last week’s Kilkenny papers and banner headlines laid that particular fake news to rest.

They know the Waterford case is self-evident. The CSO crime figures are there for all to see and if the decision on the HQ was to be made by Commissioner Drew Harris alone then Waterford would be chosen.

‘Lobbying in this country is ubiquitous and endemic. A public toilet cannot be situated in Ireland without political influence being brought to bear.’

The crime figures for 2019 are worse than 2018, possibly due to better policing and better detection rates, and we still have four months of 2019 to go.

No one shouted stop!

Local motor dealer Tom Murphy’s appearance on WLR in connection with the location of the proposed Garda divisional HQ marks a turning point in local politics. “No one shouted stop,” he said, quoting the immortal words of the late John Healy in connection with the 1950s devastation of rural Ireland.  Is anyone shouting stop over the almost inexorable drive by government, elected and official, to undermine Waterford city?

The business community is waking up to the impact of government policies on the Waterford economy. We won’t have business, because we won’t have a city. We will have a low level county town offering primary education, Elastoplast and menial jobs. Is this what Fine Gael wants?

We have been regaled with fine words and promises from the Taoiseach and others to no avail. Political verbiage!  The Garda HQ has assumed totemic importance for Waterford. If it is not here then we can forget Fine Gael. No one from that party should ever be elected again to any council or Dáil. We have had enough of being shat on and will look elsewhere for our salvation.

Insanity is doing the same thing over and over again and expecting a different result.

We have had enough of the Fine Gael entourage, Simon Coveney and Simon Harris waffling on to us. The former refused to implement a government boundary commission recommendation and prioritises the Cork medical and educational lobby above all else. The latter is about as useful as a chocolate teapot.

Toby Helm, writing in the Guardian of Dominic Cummings, the hated Boris Johnson Brexit advisor, said, “Cummings has long been known at Westminster for his disdain for Whitehall and the way the entire system of British government works. He doesn’t mince his words or tolerate those he regards as fools. “If he meets resistance from ministers or officials he will just tell them to f*ck off, whoever they are,” said one Whitehall source.  It is coming to a moment when that is the precise language that the plain people of Waterford and its business community will use on Fine Gael. The Garda HQ decision will tell all.

Last week came news that WIT was not included in a €100m government scheme for the creation of 15,000 third level spaces in Dublin, Cork, Limerick, Galway and Sligo. The scheme will cost €500m with the extra money provided by institutional borrowing and their own funds. WIT was excluded because it simply had not the money to apply. UCC is building a €25m new business school while the €14m Business School of WIT, which was given permission in 2009, was cancelled by Fine Gael in 2011 just as work was about to start. Since then WIT budget has been cut by 25%. It has been prevented from operating new courses.   Management and resources have been undermined.

WIT cannot borrow money from the European Investment Bank for instance, but universities can. A borrowing facility is included in the Institute of Technology Act but has not been allowed to operate by the Dept. of Education.

WIT academic Dr Ray Griffin does not begrudge Cork any investment. I certainly do, because there is no equity, no fairness in resource allocation. We are being taken for a complete ride by government. We cannot build new facilities at WIT because WIT has no money because WIT budget has been cut by the government which will not allow it borrow!  What kind of political deception and lies underpin this disgusting charade?

Last week came welcome news of a planning application for a new 130,000 sq foot science, engineering and computing building at WIT.  This is part of a PPP, just as the cancelled Business school was. As such it is subject to all kinds of variables. It may not be built until 2022. The building will add very little to the overall size of teaching space in WIT because they must surrender the Good Shepherd campus to the Waterford/Wexford ETB as part of the deal. WIT is being shrunk back to its original Cork Road campus when every university in the country is expanding. The Good Shepherd campus adds style and cachet to WIT. DCU has taken over the All Hallows facility in Dublin. No one is shrinking their footprint?

Fine Gael policies are killing WIT and limiting its growth potential.  The new WIT building will be an almost cost neutral exercise for the Dept. of Education. They will be able to decant the Waterford College of Further Education to the Good Shepherd and end up with a terrific site in Parnell Street to sell. If WIT was a university it could borrow and or come up with a deal to make all this happen itself.

Ah, Dubland, where everything is spent in euro billions, money for any project is no object, a Children’s Hospital costing €2 billion is deemed to be simply an underestimation of costs,  DIT, now TU Dublin, has sold its old Kevin Street site for €140 million. This means they have this huge sum to invest in their new €1 billion campus in Grangegorman. The fruits of the Dublin boom!

Meanwhile, the old Waterford Glass site on the Cork Road which is the most natural fit for expansion by WIT and which would be logically bought by them if they were a university is just lying there mouldering. It is offensive to the city at large. WIT cannot buy it as they have no money. John Halligan, who is a minister in the Department of Education, is unable to make this small thing happen. He should go down the Quay with the rest of Waterford’s parents every Sunday and watch as our young people depart on the hoof to universities all over the country in what is the greatest economic and brain drain from any city in the country.

We are impoverished at every level. We pay to send them away and they never come back because the government denies this city the equality of opportunity in university education which it has sought since 1936.

Minister for Finance Paschal Donohoe came to town to tell us our future. That relies heavily on the development of the North Quays. Mr Donohoe came empty handed, which is not unusual in these parts.  We have become used to the diet of government gruel.  It has been made clear to all and sundry by Falcon Real Estate that they will drop the project if funding is not available in November. This is what private companies do. Last year €6 million was made available under the first tranche of funding. A second tranche was to happen in February but may now happen only in October. Minister John Paul Phelan has already indicated that another €6 million may be on the cards. These sums are entirely insufficient for the project size where €100 million is needed to provide public infrastructure.

Mr Donohoe, said last week that “this is a great project, of the type we should be supporting”. And so say all of us, but then went on to say, “development in a phased and sequential way”. If that means the long finger, then we all have cause to worry. Don’t keep telling us Paschal, show us!

Of even more concern though was the attendance of 10 local councillors at City Hall for the Minister’s visit. Up to 22 members of council could not be bothered to attend to support the city manager in his lobbying for the visit of the second most powerful man in the country.

The metropolitan council has 18 members of whom only seven bothered to attend.

I am sure that some councillors had adequate business and other reasons why they could not attend at short notice, but this was an event that required a very strong team performance, if only to surround the man and lobby about the Garda HQ. It was just not good enough.

John Halligan said to Damien Tiernan last Friday that this is good city with good politicians who are trying their best. Sadly to have to riposte, that on the evidence to date, their best is simply not good enough.

It has long been suggested that Waterford simply does not “do” politics in the way it is practised in Ireland. We are long on complaints and short on lobbying, especially in the places where lobbying needs to be done. The absences from Paschal Donohoe’s visit to the city last week again confirms to many that our politicians don’t get it.