THE recent controversy regarding the temporary relocation of the ‘Vadrafjordr’ longboat has sparked a debate about how the city and county could positively exploit its rivers and coastline from a tourism perspective.

Promoting the Waterford Estuary, taking into account its role in commercial navigation, while creating greater river-based linkages between the city, New Ross and the Hook Peninsula, remains somewhat of a slow burner.

Talking of slow burners, a long-standing project to develop a cruise connection between New Ross, Waterford and Mount Congreve remains “in train” according to the company attempting to get it off the ground.

Its proponent, who has promised to talk to the Waterford News & Star in more depth when the project reaches a more advanced stage, is clearly keen to develop a segment of the tourist sector that’s not being tapped into.

In addition, the greater promotion of the Suir and Blackwater rivers for a range of leisure activities, along with the potential creation of Blueways along the banks of both rivers would surely prove popular.

A Waterford City & County Council spokesperson told this newspaper that a Blueway plan for the Blackwater is currently being developed “for a funding application” while funding has been secured for a Coastal Blueway linking Waterford, Wexford and Wicklow.

The further development of regional tourism, taking both Greenways and Blueways into account was identified as a strategic objective in the South East Regional Enterprise Plan (to 2020), which was launched in Waterford last March.

According to the report, the region is “ideally placed” to develop an enhanced cycle route, linked into “a national Greenway network and in particular to the Barrow Way and Grand Canal Blueway and provide a spectacular gateway eastward to Dublin as well as westwards to the rest of the country. A regional strategy has been written that outlines the steps required to deliver on this ambition. The task now is to co-ordinate the development of the network of Greenways, Blueways and key trails, ensuring that each constituent part of the network is delivered and to ensure the network’s sustainability by building the visitor experience that occurs around it.” The report identifies the delivery of such a concept by no later than the fourth quarter of next year.

“River based activities are part of the tourism and rural regeneration initiatives which the Council are looking at and would be discussed by the Executive and at a local level with councillors, community groups and local agencies,” the Council spokesperson added.

City and County Mayor John Pratt said that more could be done to positively capitalise on the tourism potential of both the Suir and the Blackwater.

“Anything that can be done to promote our city and county deserves the Council’s consideration,” he said. “And I feel that promoting our waterways more widely, and developing blueways is certainly one of those issues that’s worth seriously examining.”

Embracing the ‘Three Ships’ concept as part of Waterford’s tourism strategy is another area where further hay could be made.

Brian Magee, Chairman of the voluntary Viking Heritage Trust said the provision of more than one Viking ship in the city centre, be it displayed on land or berthed on The Quay, was “a really good idea”.

He stated: “In all likelihood, you’re probably talking about an expensive project but when you look at the feedback on Trip Advisor and the positive reaction visitors have to the longboat (at Reginald’s Tower) and the Viking sword on Bailey’s New Street (the ‘Dragonslayer’ by carver extraordinaire John Hayes), people coming to Waterford clearly love the Viking story that’s being told in Waterford. And I recall the great excitement there was in the city when Santa came up the river in a Viking ship for the start of Winterval (in 2013), so there’s clearly great enthusiasm and interest in our Viking history.

Mr Magee added: “And the fact that the Greenway will be extended into the Viking Triangle, establishing a physical link between where the Vikings first landed (at Woodstown, near Mount Congreve) and the Viking Museum at Reginald’s Tower, will be another brilliant development.”

When asked about the prospect of adding a maritime museum to Waterford’s impressive heritage offering, a Council spokesperson stated: “Needless to say the Council would be very supportive of new maritime-related proposals from the private sector. Museums are expensive to develop and operate and normally need support which the Council is not in a position to give.” 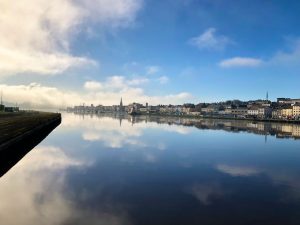 The River Suir holds tourism potential that has yet to be positively exploited. 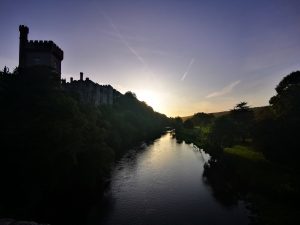 The River Blackwater is another resource whose potential is only now being actively considered.