Tributes paid to psychiatrist (40) who died at Mahon Falls

Tributes have been paid to psychiatrist Séamus Mac Suibhne (40) who died following a fall on the Comeragh Mountains on Sunday afternoon.

Dr MacSuibhne, a Dublin native and resident of Clonmel, is believed to have fallen at least 10 metres (33 feet), sustaining fatal injuries while walking with his family near the top of Mahon Falls at approximately 1.30pm on Sunday afternoon.

In a statement, South East Community Healthcare honoured their “colleague and friend” who was working with the Kilkenny Mental Health Services.

“Dr Mac Suibhne was extensively involved in all aspects of the delivery of mental health services in Kilkenny,” said David Heffernan, the HSE’s Head of Service for Mental Health in South East Community Healthcare.

“In addition, Dr Mac Suibhne played a key role in the development of the Liaison Services with St. Luke’s Hospital. Dr Mac Suibhne was also highly regarded through his teaching role with the Royal College of Psychiatrists of Ireland (RCPI) and played a significant role in the education and mentoring of all new doctors in training within the Carlow-Kilkenny Mental Health Services.”

Emergency services, including Rescue 117 and South East Mountain Rescue (SEMRA) were called to the scene on Sunday afternoon.

According to a SEMRA spokesperson: “Within a very short time (of the alarm being raised) the Waterford Coast Guard helicopter, Rescue 117, was on scene at Mahon Falls and lowered the winch man down to the casualty site. The winch man treated the casualty at the scene. An experienced member of SEMRA was also on scene and assisted the winch man and controlled the hi-line for lowering the stretcher and evacuating the injured walker (to University Hospital Waterford).”

SEMRA escorted the casualty’s family members from Mahon Falls and had a vehicle waiting at the bottom of the waterfall to transport them to UHW, where Mr Sweeney was pronounced dead. A file is being prepared for the Coroner’s Court, according to a Garda spokesperson.

Clonmel-based priest Father Michael Toomey (previously based in Tramore) offered his “sincere sympathies to the family” of the deceased on Monday afternoon. “We will keep them in our prayers throughout this deeply saddening time.”

Deaths in the Comeragh range have proven relatively rare events over the past four decades. In November 2017, Thurles-based accountant Michael Fewer (a member of Mid Tipp Hillwalkers) died on the mountain having taken ill during a walk. It’s understood that the previous mountaineering-related fatality in the area dates back to the 1970s.

A post mortem examination on the body of Dr Mac Suibhne was conducted on Monday. He is survived by his wife Aoife, their children Eimear, Dearbhla and Donnacha, mother Áine and brother Eamon. He was predeceased by his father Michael.

Dr Mac Suibhne’s Requiem Mass will be held at St John the Baptist Church, Powerstown, Clonmel this Thursday at 12noon followed by burial in the adjoining cemetery. Donations, if desired, to SEMRA, who also offered their thanks to Rescue 117, the National Ambulance Service and Gardaí in Tramore for their assistance during the incident. 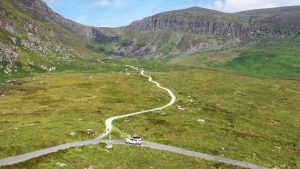