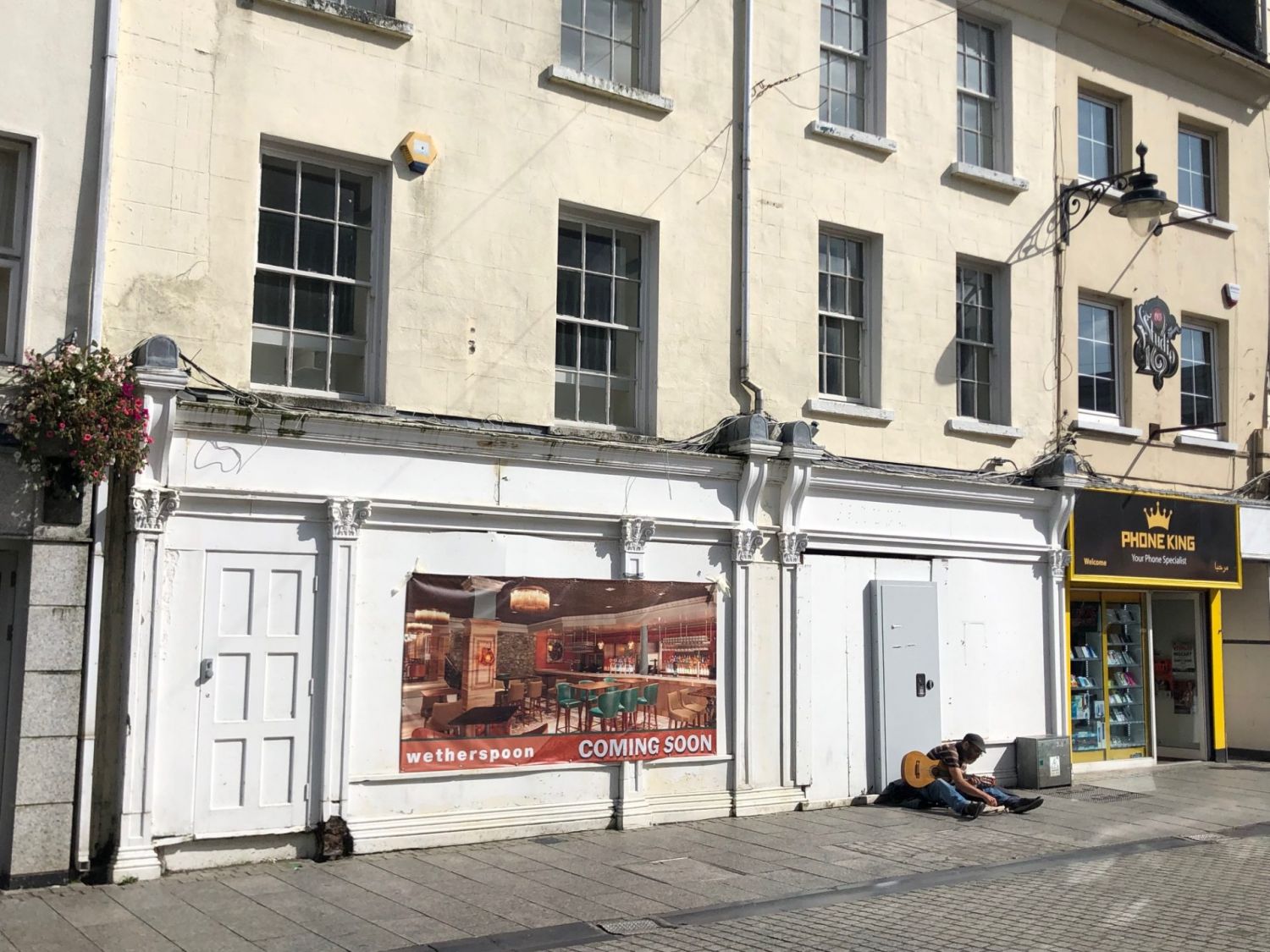 The front entrance of the Wetherspoon’s site on Broad Street

THE much anticipated start date for Wetherspoon’s new Waterford bar has been confirmed to the Waterford News & Star as mid-November. The €2.5m build is expected to take up to six months and will create 60 new jobs once it’s opened.

Wetherspoons have been in full research mode for the last few months, not only making sure the planning submission covers all bases, but also making sure that the pub – which will not be called Wetherspoon – will have a name befitting the location.

Speaking to the Waterford News & Star this week, a JD Wetherspoon spokesperson outlined the names that were being considered for the venue, and the thought process behind each one.

“There are a number of names currently being considered, each one with an educated reason behind it,” the spokesperson said. “Numbers 17-18 Broad Street – one half of the bar – are three-storey Georgian buildings fronting on to Waterford’s main shopping thoroughfare. Both were originally town houses and now form the western half of the JD Wetherspoon bar, which extends eastwards into 7-9 Arundel Square. For most of the 19th century, no. 17 was a licensed premises serving flagons of beer and cider. In the first half of the 19th century, no. 18 was an apothecary’s shop, with ‘patent medicines’ in blue glass jars and amber flasks hence one of the names being considered is “The Flagon and Flask”.

After an archaeological assessment was carried out on the site in 1998 the remains of an ancient clay bank and ditch were revealed, running north-south between 17-18 Broad Street and 7-9 Arundel Square. The 10 metre-wide bank, originally 1.4 metres high, sloped downwards from west to east and gives inspiration to another possible name – “The Clay Bank”.

Another name – “The Arundel Gate” was suggested because Arundel Square takes its name from the nearby gate of the same name in Waterford’s ancient city wall. Long-since demolished, the Arundel Gate stood in Arundel Lane, which is immediately north of the Wetherspoon’s new pub.

Other names being considered by Wetherspoon’s, which need no explanation, are ‘The City Wall’, ‘The Old City’, ‘The Glass Cutters’ and ‘The Crystal Glass’.