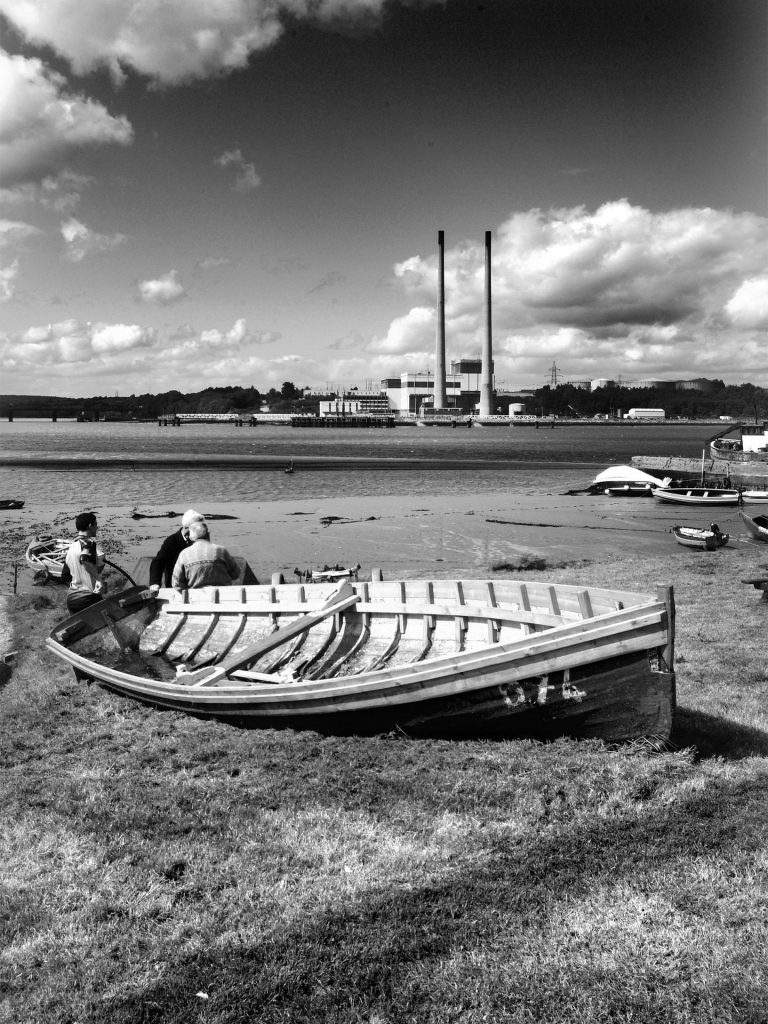 IN the top three Gaultier rambles, the Barn Quay Loop of 7km offers a rich tapestry of landscape, terrain, nature and history. But above all it is our magnificent estuary, Waterford Harbour that makes this walk.

From Faithlegg National School just above Cheekpoint head downhill towards Waterford. At 300 metres turn left at a half-hidden sign, Coolbunnia, on the far side of the road. You are on the Hurthill lane. At 800 metres a sharp left turn brings you on to a grassy track that eventually goes downhill to the water. The track narrows by a railing which you leave on your left as you descend. On your right you have glimpses of the Estuary and the Wexford shore. Between you and the water new plantings of beech and oak are doing well.

Where the track eventually makes a wide turn to the right there was a clearing in on the left, a rivulet cascades to the clearing floor. This area was once a slate quarry and you will see evidence of this when you get to the shore. Last time I was here at the turn there was a swing which makes a nice diversion for children and adults. The track continues down to the water and the remains of the Barn Quay. Tarry for a view and some refreshment.

Turn to the left here and head upriver noting the abundance of flat slate stones. The shoreline along here is fascinating, a real geology laboratory with examples of rocks turned on their end by some volcanic activity long ago. The geology story here goes back 500 million years. Evidence of coastal erosion is ever present and here and there the last tides have washed up interesting debris. Shore birds are often present – oyster catcher, heron, redshank, black-head gulls adding sound tones to the soft lapping of water at tide’s edge.

Continue on past the next landmark, vestiges of a lost quay, Ryan’s Quay, at a shoreside two-storey house. Just past a light beacon (photo) turn sharply left on to a grassy track that brings you up past some houses. You are on the Russianside leading to a T-junction where a right turn brings you to Cheekpoint crossroads and the village shop and perhaps another pause for refreshment. Take the uphill road towards Waterford and your start point at Faithlegg National School.

Start/Finish: Faithlegg National School, between Faithlegg Church and the village of Cheekpoint. During school days it is best to avoid school rush early in the morning, and again in the early afternoon; Distance: 7km; Time: About 2 hours including pauses; Suitability: some uneven terrain, beach walking, and a moderate climb on road from beach.

Cornelius Bolton, Jnr, was an enterprising landlord of the late 18th and early 19th centuries. It was he who built the area’s big house, Faithlegg House, in 1783. He developed ambitious plans for the development of Bolton village, now Cheekpoint. Important parts of his plan were achieved – the transfer of the Milford Packet Company’s Irish terminus to Cheekpoint, the building of a rope-making factory, a home-knitting operation, a small hotel. But the overall town design and build proved too elusive for his budget. He eventually went bankrupt and sold Faithlegg House.

He also developed mining and quarrying and one of these quarries which was being advertised for lease in 1803 was in the partial clearing referred to the walk description above. The spelling of the Barn Quay poses a problem. There is no barn or evidence of a barn here but we do know that a prominent Waterford entrepreneur of the period was a Mr. Barron. Is it possible that he took up the lease of the quarry and built a quay to export the quarried slate? One of the intriguing questions of history!

Almost all of this walk is in the townland of Coolbunnia. Canon Power gives ‘Ridgeback of the Stream’ as the Irish. We don’t know if this is the original Irish version or a later coining. In any event it is a delightful 368 acres encompassing magnificent views, a wonderful walk and counts as the 1810th townland in Ireland according to size. As you approach Faithlegg Church going towards Cheekpoint, Coolbunnia will be to the right of the road as far as the village.

Mud, Mud, Glorious Mud! Unwanted by some, welcomed by others, river mud is, was and will be a fact of estuary life. It provides a home for a myriad of marine life. Studies of mud in the Clyde Estuary reveal an astonishing 40,000 life forms in a cubic metre of the gooey stuff. Birds love this especially black godwit, oyster catcher, and redshank along the shore at Cheekpoint. Go out to Cheekpoint during the winter months and make time to watch the waders probe the mud, especially on an incoming tide.

Our elusive and sadly vanishing eels also find the mud a sheltering habitat. They have done so for thousands of years. And at one time farmers sought it to enrich their lands, building ‘manure roads’ to it as was the 19th century road that led to Ballinakill. Mud has been a fertile subject for artists and a visit to the mudflats at Cheekpoint when tide and sun are right can be rewarding for photographer and painter.