Mr Higgins’s comments on Wednesday night caused widespread surprise, anger, and bemusement in Government circles yesterday over what was seen as “interference” in political matters.

As Fine Gael ministers, TDs, senators, and MEPs gathered in Garryvoe, east Cork, for their party’s think-in ahead of the Dáil’s return, Mr Higgins’s comments were widely commented upon.

“Of course they were deeply unhelpful,” one senior minister said. “We are trying to hold a public pay deal together with sticky tape and Blu-Tack. This will only heighten the pressure on us to loosen the purse strings even further.”

“This issue has significant currency and has been recognised by Government also,” said Mr Creed. “I think it’s quite unusual [the President’s comments]. No, I’m not surprised or annoyed to be honest with you, it is an issue out there. Look, he has [commented], and his voice is the same as the Government and the Oireachtas.”

Tánaiste Simon Coveney said he does not have “any huge concerns” about Mr Higgins’s interjection.

“I think President Higgins was reflecting concern and a frustration in Government,” he said.

“That’s why we have improved take-home pay in certain areas on the back of that report, and that’s an ongoing discussion with the Department of Defence and the Defence Forces, as well as obviously the broader improvements in public sector pay which are happening as a result of government decisions.”

Finance Minister Paschal Donohoe said that plans have been put in place to address pay for Defence Forces personnel. He said changes that have been made will see a three-star private’s pay rise from €21,000 to €28,000 and that Defence Forces staff will also benefit from changes to their allowances.

A spokesperson for junior defence minister Paul Kehoe told the Irish Examiner the Government is “actively addressing” pay, recruitment and retention issues in the Defence Forces. 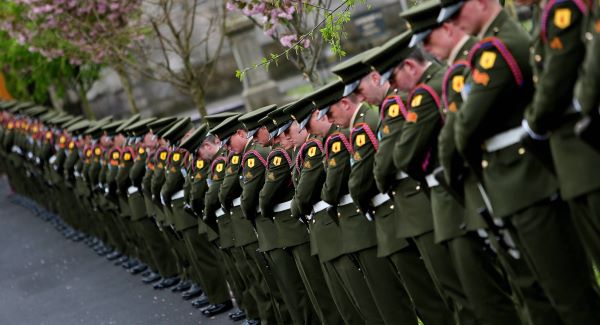 The spokesperson said the existing pay deal will give Defence Forces personnel pay rises of “up to” 7.4% between 2018 when the deal began and 2020, and that “a newly-qualified three-star private now started on over €28,200, compared to €21,000 before these pay increases were introduced”.

The spokesperson said the independent public service pay commission has also recommended “a series of measures” to improve Army, Naval Service, and Air Corps pay. He said the Government has published a proposed implementation plan for the pay rises, and that it is under consideration by Defence Forces representative bodies.

A spokesman for Mr Higgins told the Irish Examiner he stands by what he said, and he comes from a position where he has a specific relationship with the members of the Defence Forces.

“The comments speak for themselves,” the spokesman said.

On Wednesday, Mr Higgins said members of the Defence Forces should have incomes that are sufficient to provide for themselves and their families.

“It is no secret that changes in conditions for serving men and women has brought its own challenges and, I have to say [as] supreme commander, it has brought hardships,” said Mr Higgins.

He said the challenges that should be addressed with “sensitivity and urgency” and those providing the service should be real partners in interpreting and responding to such changes.

“Should this not happen, there is a real danger of a gap opening up between our expressed appreciation of their work and the circumstances we deliver for its practice,” he said. “Serving men and women should have conditions including an income and prospects that are sufficient to provide for themselves and their families.”