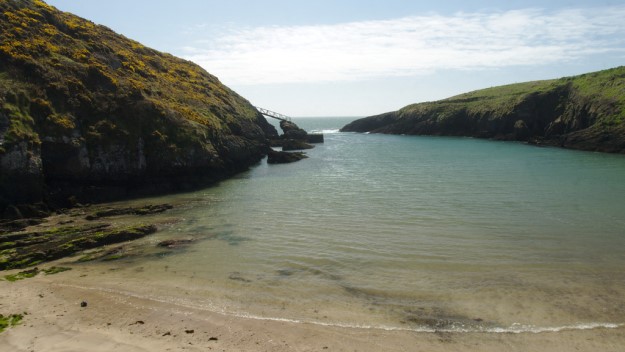 This is a pleasant road walk of 7.5km, including an optional add-on to Ballymacaw Cove. Allow about 2 hours (and a bit longer if either of the two pubs in Ballymacaw is open). A walk for the fresh air and the views of Tramore and the sand dunes and there’s always a bit of history and nature.

From Carbally church (N52˚09’44’’ and W7˚03’43’’ and about 10 km from Waterford not far from Waterford Airport) head south uphill. At the junction 300 metres on, turn left and follow the road to Ballymacaw. The hedgerows here have the usual variety of trees, shrubs and plants with seasonal wild flowers, starting in winter with the sweet vanilla scent of the common invasive ground cover, Winter heliotrope (Petasites fragrance and in Irish Plúr na Gréine) and finishing in early autumn with drifts of the feathery fragrant meadowsweet (Filipendula ulmaria and in Irish Airgead luachra) and banks of pale carmine Rosebay willow herb (Epilobium augustiflolium and In Irish Lus na tine).  At Ballymacaw you have the choice of the shorter or longer route, the latter involving a detour to Ballymacaw Cove (photo).

For the longer route from Ballymacaw continue to the left at the crossroads past another pub.  Note the stepped stile in the wall to the left, probably put there to avoid winter floods in the hollow of the road. Continue on through the junction where the road begins to descend to the Cove. On the way a row of white, roadside cottages is prominent, formerly a coastguard station. A little further on to the left just before the cove the ruins of a stone building are likely those of the coastguard boathouse.

The Cove holds memories. For generations of fishermen the cove has been a refuge; the landing platform connected to the cliff by a short bridge is testament to its continuing use.  Smuggling was undoubtedly an activity at one time as the presence of the coastguard would suggest. And families have come to this exquisite place for their summer swim. And so, dear reader, take a moment here to reflect and enjoy.

Retrace your steps to Ballymacaw and at what remains of the dancing platform go left and continue on to the junction of the Carbally to Brownstown Road where there is the reward of magnificent views of Tramore Bay and the sand dunes. A right turn here brings you back to your start point leaving historic Carballymore House and the former Summerville national schools on your left as you amble back.

The Carbally Ladies Land League. Ellen Cotter lived next door to Carbally chapel. Her house almost adjacent to the graveyard is gone and for the vast majority so is her name and life forgotten. But for a group of determined local women her house was a place of importance and decision-making.  During the troubled times of the Land Wars in the 1880s, the daughters of Charles Stewart Parnell, Anna established the Ladies Land League to further the work of Davitt’s National Land League. Clearly, Anna was an inspiration to women who saw the injustices of the land tenancy situation. Among those was a group of women in Gaultier who met in Ellen Cotter’s house after mass on Sundays. Their names are held dear by the older farming community and include Margaret Corcoran of Kilmacleague, Margaret Power of Ballymacaw, Mary Power of Liscelty, Alice Butler of Ballyshoneen, Mary Phelan of Ballinamintra, Catherine Power of Brownstown, Alice Flynn of Carbally Beg, Mary Ann Power of Ballinamintra and of course the aforementioned Ellen Cotter.

Their work included fund-raising and building a shelter for an evicted family. This was a remarkable event: from Dublin by train came the building material transported from the station by a cavalcade of over 100 farmers carts led by two bands along the quays and erected at Kilmacleague by a local meitheal led by staff from Kiely’s Brewery. The Hut as it came to be known housed the evicted Morrissey family for years after, a testament to the humanity and determination of the Carbally Ladies Land League. The Barony of Gaultier Historical Society will erect a plaque to honour them. Contributions toward the cost will be welcomed. (thanks to Michael Farrell, chair of the Barony of Gaultier Historical Society for the material here.)

Several townlands are traversed on this walk. Starting in Carbally Beg, the road after the first junction separates Gortahilly (possibly heather garden or cock’s garden) from the townland of Ballymacaw (McDaid’s townland). The road to the cove separates the latter from Coolum (from Cúl Lom meaning ‘bare ridge’), which is to the left of the return leg towards Carballymore. From the crossroads overlooking Tramore Bay you are in Carballymore (the winding hamlet?) almost all the way back to the start.

Hedgerows in Autumn. The 300,000 but rapidly diminishing kilometres of hedgerow in Ireland are now taking on their autumn glory. Home to 105 wild flora species, including the aforementioned meadowsweet (photo), protected nature corridors, serving as a biodiversity forest – edge habitat and animal shelter, hedgerows in their autumnal glow with their laden haws give a warm and roseate hue to the landscape. Look for the crab apple or wild damson or the plums of Welsh poet Gillian Clarke’s lovely lines:

Daily the sun warms them

in a late love that is sweeter

in bed at night we hear the heartbeat of fruit fall.