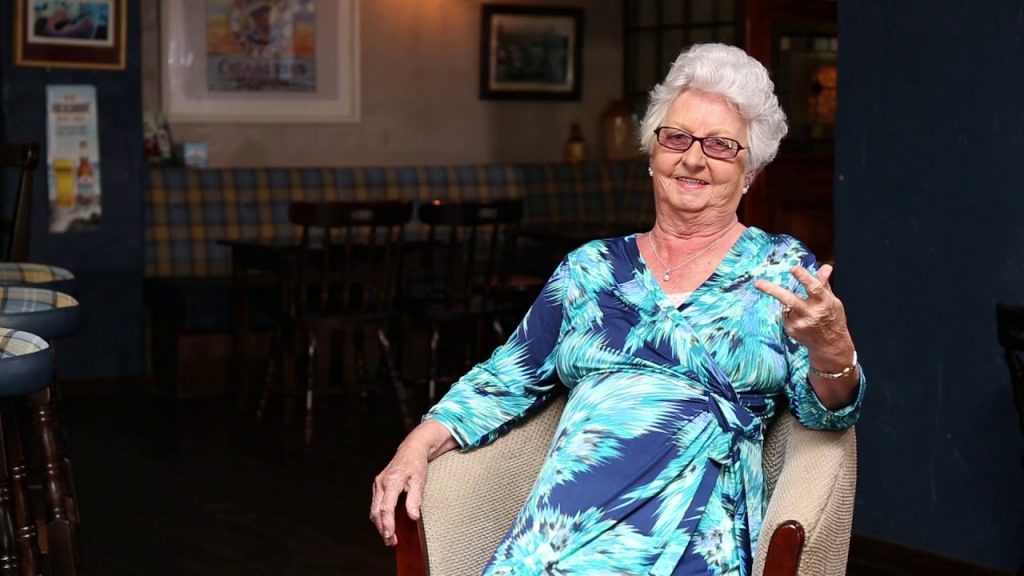 The late Breda Ryan RIP who features in Tramore Tales.

WATERFORD Youth Arts Film Productions, supported by Waterford City and County Arts Office, have been making films that capture the folk history of Waterford City and County. This is a hugely important project because it captures the lore and wisdom of generations and is told by primary sources. People who lived through the changing times of Waterford’s recent history when the state moved from being a largely agrarian and rural dominated world to the urban and in-between urban and rural society we now inhabit.

Things may be better now but the grimmer times of making do on little are well told.  Pádraig Cunningham recalls his father and mother starting off with a saucepan of fat and a bucket of chipped potatoes in a shop that was to become the last word in fast food and a family that sponsored anything that happened in the seaside town. Pádraig remembers Main St. before there was hardly a business premises in it and names all the families.

Ned Stubbs, resting on the bar in Sadie Robinson’s, remembers tough times but recalls times when everyone chipped in to help neighbours. Breda Ryan (who sadly passed away before the film was produced) recalls being a widow with three children at only thirty-two when her young husband died in an accident. “Everyone helped us through,” said Breda who would become the Manageress at the very popular Ritz Bar.

Gino Kavanagh clearly loves his seaside home. He worked on the buildings in England but never settled. Gino, along with Michael Raher, speaks lovingly of young lives lived on the beach where they played football and swam all day until dark. Sarah Richardson remembers days spent swimming at the Pier with a tan that was the envy of the townies… “they said it would wash off” laughs Sarah.

Everyone remembers a town that lived and breathed laughter and fun all summer long. I loved the talk of “heading down around” to the amusements with all the noise, colours, variety and buzz of the hurdy-gurdies although Seán Brennan cautioned that it was as if someone closed the gate on the town on September 1st because “the whole play was just dead afterwards.”

Anne Phelan remembered the story of the lads who found a sea mine that had floated in on the beach. Not knowing what it was, and attracted by the small fortune to be had from the brass connections on the mine, they hauled it up to a garage in Patrick St. and took a blow torch to it.

“They were blown to bits,” sighs Anne, “but one survived; the man who was down in the pit because the bomb blew outwards.”

Pat Kiely is an encyclopaedia of information on the history of cinema in Tramore. He details the first cinema that came from London and was located at the holiday shops. Casino Pictures became the Silver Slipper and the first picture shown was Laurel and Hardy’s ‘Dueling Dueces’ and the cinema went on to show some real art house movies. It was common for the reel to break down and Rocky Mills was never slow to deliver an Elvis classic to pass the time.

Hard stories were told by Terry Morrissey and Breda Ryan of tough times with the nuns and brothers although Antoinette Crehan envied the girls who walked to school because the nuns used to make cocoa for them. Michael Raher remembers boys having to complete secondary school education in Mount Sion or Waterpark because the school was only a secondary top – a school that only taught to leaving cert.

There’s some nice musical contributions from Rocky Mills, Tom Mackey, Miller Power, Richie McDonald and others, and a wealth of vintage pictures and videos that bring the world of the town to life.

Well done to Ollie Breslin, Keith Currams, Gary Burns and Ciaran Connelly on a film that captures the social history of Tramore told by the people who know it best – local seasiders who lived through the changing world of the twentieth century.