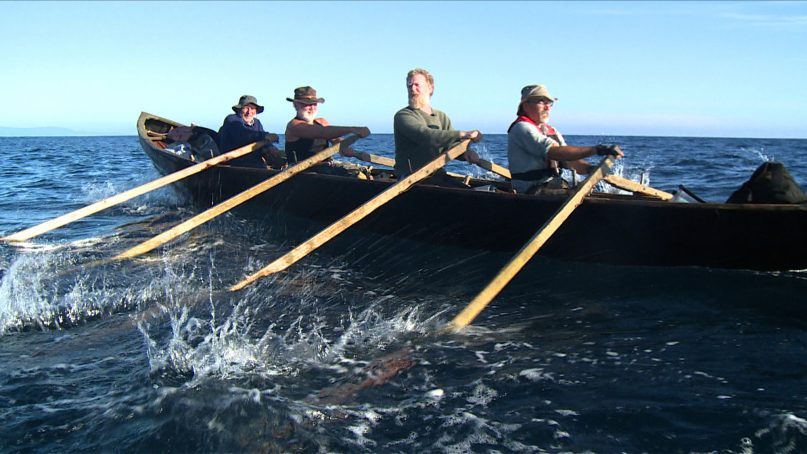 A screening of ‘The Camino Voyage’ will take place at the SGC Cinema on Friday, October 4.

A screening of Dónal Ó Céilleachair’s ‘The Camino Voyage; will be held at Dungarvan’s SGC Cinema on Friday, October 4 in aid of Waterford and South East Samaritans.

The film tells the story of a crew: a writer, two musicians, an artist and stonemason who embarked on the Camino by sea, in a traditional boat that they built themselves to undertake a 2,500-kilometre odyssey all the way from Ireland to Northern Spain.

This intimate documentary charts the trials and tribulations of a voyage that in the words of Danny Sheehy, took “sweat, blood and blisters to complete while deepening and renewing friendships, creativity and spirituality in the process”.

For hundreds of years people sailed from Ireland to A Coruña in Northern Spain and walked the camino to Santiago de Compostela from there. In 2014 this inspiring crew began their own version of this historical voyage in their own handmade traditional boat, called a ‘Naomhóg’.

Pulling into coastal towns and villages en route, camping and cooking as they went – this eclectic crew forged many new friendships, surprising those they met with a boat that seems to come straight out of the Middle Ages.

There will be a drinks reception beforehand with gin sponsored by Blackwater Distillery, wine by The Old Bank Restaurant and cheese by Glanbia while director Dónal Ó Céilleachair will also take part in a post-movie Question & Answer session.

Tickets (€15) are available through the Waterford and South East Samaritans, their Facebook page, Devereux Manshop and Kelly’s Pharmacy, Dungarvan.

Dungarvan My Home Town: News From The West