PHOENIX: A journey of change 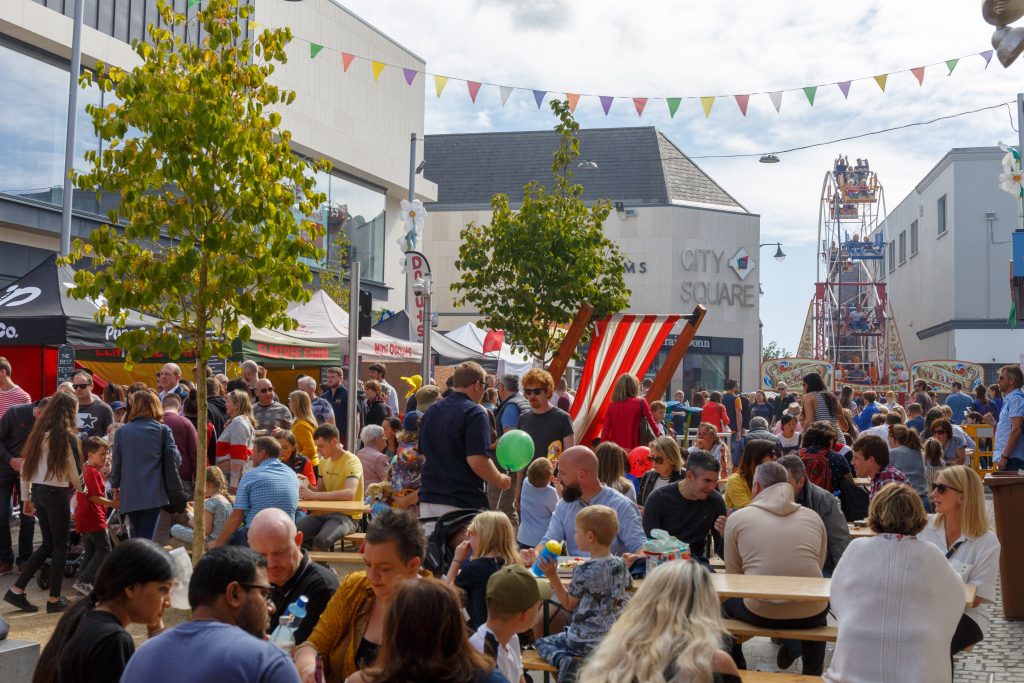 Arundel Square during the recent Waterford Harvest festival. This area has benefitted from Waterford Council’s works on the city’s urban realm. Photo by Keith Currams

A COUNCIL notice has been published about a plan to extend the Dunmore East coastal footpath by 4.8km from its current end in Portally to Rathwhelan and Ballymacaw. Eventually even further to Brownstown may be considered.

Anyone who has walked from the lighthouse in Dunmore to Portally knows how beautiful it is. It’s all about providing amenity. Tourists benefit of course, but amenity is essentially for the people who live here.

Taking a sneak peek in an open door at the old Trustee Savings Bank building in O’Connell Street it’s possible to see the new city art gallery. The council has a smashing collection of art which deserves to be seen. It’s an amenity that would grace any city, and provides a perfect foil for the Garter Lane Theatre directly opposite. In architectural terms there is a lovely small office space pushed into the yard space between the new art gallery and the old Munster and Leinster bank. Well designed and well executed, by the Southern Regional Authority who occupy the M&L premises and who have lovingly restored it.

‘People think that investment should change the perception of the city almost over-night. That may be possible with a small town, but a larger urban area, like a ship at sea, takes a while to turn.’

Amenity wise, we did not have the Bishop’s Palace museum, the medieval museum, the mayoral museum in city hall, or even the Waterford Glass showrooms on The Mall 10 years ago. Reginald’s Tower had been restored and other works were ongoing, but the Viking Triangle was only in its infancy.

People think that investment should change the perception of the city almost over-night. That may be possible with a small town, but a larger urban area, like a ship at sea, takes a while to turn.

When you think on it, even the Greenway and the Waterford and Tramore Eco parks are all new initiatives. Much done, much more to do, springs to mind.

Ours is a journey of change and reorganisation which has not been without its own struggles, more often than not centred on the lack of available financial resources in the city.

One other piece of news that will cheer many people is that a contract has been issued to clean and refurbish the island traffic island behind the equestrian statue of Thomas Francis Meagher on The Mall. This work is long overdue, but in a city where council, councillors and such developers as we have, really don’t value trees and their contribution to the environment as evidenced by the shameful destruction outside the Tower Hotel, we wait rather anxiously to see what will happen the lovely stand of trees on this traffic island.

Like the curate’s egg in George du Maurier’s cartoon, other news is good in parts.  At last Bord Pleanala gave permission for the new pedestrian bridge from the North Quays to the Clock Tower. The phrase, “game changer” is hackneyed beyond belief but in this case a new bridge will change the dynamics of Waterford city in a major way. If no development ever happened on the North Quays, the ability to walk along the quays to Rice Bridge, cross over to Ferrybank, walk to the new pedestrian bridge and back to the Clock Tower will facilitate an explosion in pedestrian traffic. A new green space around the Clock Tower is long overdue.  We might even eventually get to see the petrol station canopy over the flower shop on Merchant’s Quay removed.

It is not clear if government funding is available to facilitate the relocation of the railway station and the development of the new bridge. Much hangs on state willingness to prime the redevelopment of our city in the same way as Galway was driven ahead by state investment over the past two generations. The €9m government investment in an arthouse cinema in that city gave pause for thought to those in the arts who survive here on official crumbs from the table. Galway has risen on an image of urban sexiness while we still look for a way to represent ourselves. On its own, the new bridge in Waterford will change our city. When does construction start?

Least positive news this week is a planning notice to demolish 29 and 30 John Street. These two properties are the old Boston Cleaners and the former Sinnott’s record shop. It is doubtful if anyone would object to the demolition of these long neglected premises if the application was part of a scheme to redevelop the site, but demolition on its own opens the door to long term neglect and urban decay.

There was a similar tale of emptiness and destruction in Arundel Square. The bottom of Patrick Street had a partly demolished corner site for over 20 years which even urban planting and wall murals could not conceal. A cleared site in O’Connell Street, next to Tully’s pub has been vacant since 1970. It would make a perfect block of apartments, but remains untouched. It’s evidence of where demolition without investment brings a city. Concrete block walls and wonderful Waterford Walls murals cannot conceal it!

And then there were none

Earlier this summer, I spent a few days on a break in Dublin, just wandering around our capital city. The changes there are simply extraordinary. There is hardly a street in the centre which has not been transformed, whether you like it or not, by massive investment. The south side of the city is undergoing an orgy of redevelopment. Money is flowing like water. The sense, for me anyway, of being from “the country”, was overwhelming. Even more disturbing was the lack of knowledge or even understanding among Dubs of where or what Waterford city was.  This huge lacuna in our marketing has to be remedied.

Despite some excellent hotels in Waterford city, we need at least one new, large scale hotel and conference centre, presumably on the North Quays, to host the kind of conference business we have not seen for decades.  That will at least allow us to keep our head above water.

Returning to Waterford on a late summer’s evening and crossing Rice Bridge always gives the heart a lift. The long low composed look of the city stretching away down to Reginald’s Tower still preserves a real 16th/17th century planned city feel.

While the buildings on the quays are in a generally acceptable state, the sea of car parking on the river side is awful. It disgraces the city. There is no European city I know of that does such disservice to a river side location. The comparison in economic activity, of which construction is a huge barometer, between Dublin and Waterford is enormous. The inability of government to identify and support Waterford city in the same way as our peer cities of Limerick and Galway is now a festering sore.

Talk, from the Taoiseach and his ministers, has been a cheap commodity. Failure to follow up with promised investment has unfairly undermined confidence locally and nationally in Waterford. It is akin to economic, medical and educational apartheid. It cannot go on.

There are presently 120 tower cranes on the Dublin skyline. Our small city could never compare with the capital city on any metric, but watching the only tower crane in Waterford being removed from the new St Patrick’s Hospital last week brought the reality of lack of investment into focus.

There are other projects, like a new €100m extension to Bausch and Lomb, Tower Hotel and various housing estates under construction, but the older city has not seen real investment for a long period. The Michael Street shopping centre was the last great hope, and had it been built and not derailed by planning objections over a period of years, it would now be in business and actively providing the kind of underpinning to the city’s retail offering that we so badly need.

Most people will remember the black American woman called Rosa Parks who refused to be segregated from whites and sit in the back of the bus in Montgomery Alabama in 1955. She struck a blow against apartheid and for civil rights. Waterford struggles do not compare with the monumental fight by black Americans for civil rights but there is hardly a soul in our small city who believes that we get a fair share of anything from government. The more we seek extra resources, the more there is negative pushback.

The feeling, as one of only five Irish cities, of being treated as second class is widely held here and the negative impact on local confidence by the lack of clarity on the Garda Divisional HQ is emblematic. The wait for a new mortuary at UHW is endless. Remember, our dead were stored in a state of decay on the floor of the existing facility and the Taoiseach’s answer was to criticise the UHW pathologists.  The HSE bought us a new fridge to solve the problem!

The wait for a second cath lab and the promised staff to man it has morphed into a living lie. No one from the Taoiseach down has really told the truth about it.

The failure to provide funding to open the new regional Palliative Care unit, built with €6 million collected by the people of this area, is shameful beyond words, but to a Taoiseach cocooned in his Dublin bubble who drives out from Government Buildings in Merrion Street into a forest of cranes and economic activity, replete with a massive over provision and over investment in health care, education, employment and investment facilities, it must be a hilarious joke.

Reading that ‘Oireachtas members are to meet Minister for Neglect, Simon Harris’ about the Palliative Care unit only adds to the torment. That man will do nothing. Must we settle for sitting in the back of the bus because it suits a Fine Gael political agenda?