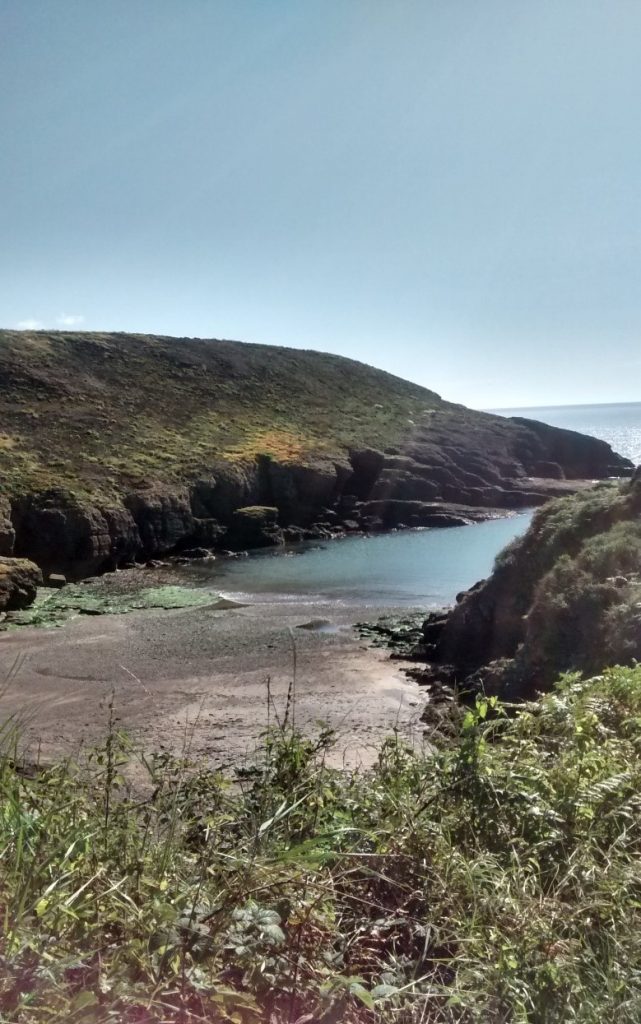 NOTE: From Rathmoylan Cove to Portally Cove by road and return by cliff is a glorious walk of approximately two hours. But it is not for everyone as there are some steep climbs and descents sometimes near cliff- edge. Walkers unsure of their footing or nervous about cliff edge walking, sometimes over uneven terrain, should take the road-only route as an out-and-back ramble.

Start at Rathmoylan Cove (4.5km from Dunmore East going west towards Ballymacaw on the coast road). From the cove where there is limited roadside parking follow the road north and then east towards Dunmore. Note the valley on your right as you head away from the water. Its contours indicate the existence of a riverbed widened by flood waters in the distant past. On your left ignore the two junctions, the first leading to Ballymacaw and the second to the main Dunmore to Tramore road. As you proceed along note the shrubby bluff to your right. This was the site of medieval Rathmoylan church and home to the Protestant parish of the 18th century.

Onwards from a double bend the road climbs a bit offering terrific views westward to Brownstown Head. About 25 minutes from your start point take the junction on your right, marked by a traffic mirror. This brings you through the picturesque hamlet of Portally where the paved road turns into a grassy track with a seat inviting a quiet time-out.

The cove opens before you (photo); a seal may oblige as it did when I last walked there. It’s hard to resist a short detour to the cove but the route is to the right by a sign with a tide warning. The track here was a little overgrown in mid-September and neared the edge in one or two spots. 50 metres on another inviting bench and just before that a scrambling ascent to the cliff-top field opening from a fence-like stile that could be a problem for some. The route then mainly follows the edge of the fields with splendid views of the cliffs and off-shore Failskirt Rocks. The descent to Rathmoylan Cove needs to be done with great care as there are several tracks, all uneven with holes covered by grass. Chose the most travelled by going a little further along the field edge.

Start/Finish: Rathmoylan Cove. Distance: 4.5km. Time: About 2 hours with stops. Suitability: Difficult because of some cliff edges and steep but short climbs over uneven terrain.

The coast here in its interesting placenames reveals much natural and social history. Walking the coast recently I was reminded of the importance of the names, especially to the fishing community. As a youngster I had a train of lobster pots which I would fish in specific locations indicated by my father.

“The wind is off the land, you can get right in to Pursachán, perhaps even Oonarhonta.”

Canon Patrick Power in Placenames of the Decies (available on the web) has helped decipher many of the over 100 specific placenames along the coast here between Dunmore and Brownstown: Pursachán is from Port an tSrutháin, the little inlet of the stream, Oonarhonta from Uaimh na Rónta, the cave of the seals.

Placenames can also tell us something about how people lived and worked. A fisherman friend from Portally gave me the story behind Poula Shagadane near Portally. The women of the village carried the big seine net over the cliff-top and dropped it down to the men below in the boats. The nets were too heavy for the boat; hence the drop from the cliff-top. And lo and behold, Canon Power refers to the place as Poll a’tSéine, the Hole of the Seine Net. What a fascinating insight into how people lived and worked.

For some, walls make boundaries but streams and other natural features such as ridges make a less threatening separation. The stream in the valley as you leave Rathmoylan Cove behind forms the boundary between Ballymacaw and Portally. The bluff to your right as you turn east separates Kilmaquage from Rathmoylan and the ridge which the road follows further along puts Knocapaddin to the north leaving Portally to the south. I grew up with the pronunciation Rawhelan but the OS maps show Rathmoylan. A 1740s chart of Waterford Harbour gives Rathwelane Cove (photo), which may give support to the origin believed locally to be the Rath of the O’Faoláin. Kilmaquage is from Cill Mo Chua, who also gave his name to Kilmacow. Knockapaddin is, according to Power, Paidín’s Little Hill. Portally is from Port an Fhalla, the Little Haven of the Parapet Wall. But it could also refer to the sheer cliffs here, ‘an fhaill’ being the Irish for cliff. 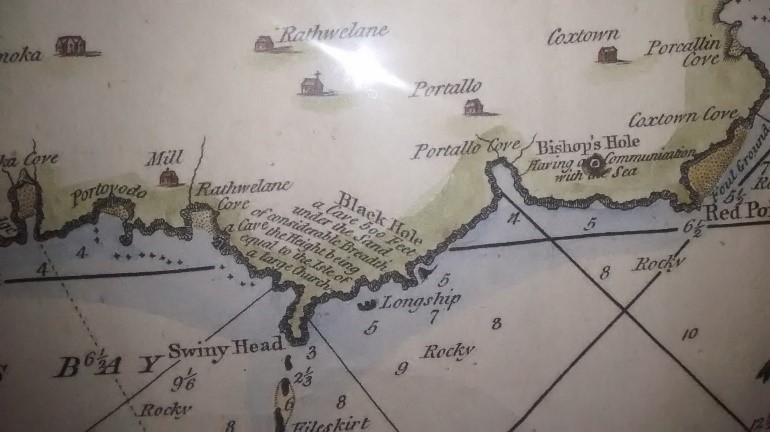 The Common Seal (Phoca vitulina and in Irish Rón). During my September walk heading out from Portally Cove, Anna suddenly cried out ‘Look, Grandad, it’s a seal.’ And, sure enough, there it was gliding silently through the clear, limpid waters of the cove. What a treat! I didn’t have binoculars with me so I could not identify whether it was a common seal, sometimes called a harbour seal or a grey seal which are larger. But I assumed it was the Common. There are approximately 4,000 of them in Irish waters. The seal is much venerated in Irish folklore in which it has a special relationship with humans. It also gives its name to places as in Oonnaronta on our walk or the mistranslated Roundstone (carraig na rónta). Interestingly, one story has our saint of Kilmaquage, St Mo Chua, being given four salmon by a seal.