WHILE disputes at meat plants at Waterford and South Kilkenny have finally stood down, the disruption caused to regular processing business in recent weeks shall take some time to iron out.

Speaking at the National Ploughing Championships, Irish Cattle and Sheep Association (ICSA) President Edmond Phelan said the initially staged pickets had served their purpose, but had become counter-productive in the wake of the September 15 Beef Sector Agreement.

“There’s already a backlog of approximately 100,000 cattle in the system,” Mr Phelan told the Waterford News & Star in Fenagh on Wednesday last.

“If you think about the window between now and next Spring, that’s probably about 4,000 cattle a week more than we should have. I think that’s going to stop any chance of a price rise over the winter and winter finishers have no chance of making money unless the price is rising as the year goes on.”

The Fenor native added: “In a normal situation in the UK, their price could be 30 or 40 cent higher than the price in Ireland and that gives us scope for a lift but about five or six weeks ago, I went over to the UK myself on a fact finding mission to see what the situation was there at first hand and I spoke to the English farmers’ unions and the base price over there is much the same as us when you convert it to Euros and the base price in France is the same. Therefore, that leads me to believe that in the short term there isn’t the scope for an increase but if we can get the commission (promised in the Beef Agreement) up and running, we can have a look into the whole workings of the market and that will give us a better chance of getting a better market share.”

An ICSA survey of almost 1,000 people, which was conducted by Red C, revealed that while 48 per cent of consumers “had some issue on age of cattle, it wasn’t at 30 months. The consumer is willing to have beef that is up to 36 months, no problem”.

Said Edmond Phelan: “We all know that the retailers and the processors are using this maybe as a way to get cattle out of the market quicker than maybe they otherwise would. But until we can get Tesco to change their requirements, the meat processors won’t change their requirements so we have to push at this, and this will be done through negotiations, not through the picket line. The picket brought the matter to a head but it’s high time to give this deal, agreed by seven organisations including the people on the picket line, a chance. It’s the first time in my memory, and I’m a long time at this game, that every farm organisation was singing off the one hymn sheet.”

Edmond Phelan said there was “probably a backlog of three weeks of extra cattle in the system, they can’t all be killed and processed in three weeks before you’ve more cattle coming on stream the whole time. It will take six months to get through all this and that actually puts a downward pressure on price.”

Speaking on Sunday night, IFA President Joe Healy said the bonuses committed to in the new Irish Beef Sector Agreement ought to be paid “with immediate effect. Factories should come forward with a strong base price and pay the new bonuses.”

Mr Healy added: “This agreement is not perfect, but I want to make it clear that it applies equally to all farmers regardless of their scale.”

In a statement, Dawn Meats reiterated its view that it “is only through all stakeholders in the industry working together to grow demand for Irish beef, attract new customers and enter new markets that the current challenging pricing environment can hope to be addressed”. 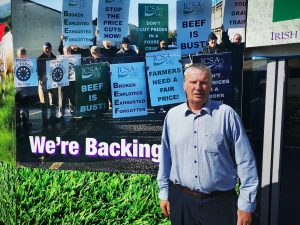