Bilberry rail extension off the tracks for now

THE additional width required to extend the Suir Valley Railway onto the South Quays would cost ‘millions of Euro’ that Waterford City & County Council does not have currently, according to Council Chief Executive Michael Walsh.

Speaking in “clear and explicit” terms at the Council’s September Plenary meeting, Mr Walsh said: “You’re caught between the rock and the river and that’s the reality in terms of the Bilberry Road. What we are doing is we’re creating a corridor there that has the sufficiency for two lanes and for a full three-metre segregated cycling and walking route which is part of the Greenway and we have no source of funding that I’m aware of in terms of seeking the additional monies that would give the additional width to allow a rail line to be constructed in there either.”

Claiming that such a proposal wouldn’t be validated by any capital appraisal, Mr Walsh added: “I’m not going to waste my staff’s time by putting a whole heap of resources into an analysis of (such a proposal). The analysis is very simple from my point of view and that’s as simple as it is. It’s not viable. The Suir Valley Railway don’t accept that? Well, I’m sorry but the answer is no.”

Mr Walsh was replying to queries regarding the potential extension of the railway line onto the South Quay tabled by Councillors Matt Shanahan, Jody Power and John O’Leary.

Cllr Shanahan described the railway as a long-term strategic asset for the city, while Cllr O’Leary referred to potential private investment which he had been recently made aware of.

For his part, while referencing the pending acquisition of a new steam engine for the railway line, Cllr Power said an extension onto the South Quays could double the attraction’s visitor figures, which last year totalled 30,000.

Michael Walsh said that the Council went “over and above in terms of the provision of the Greenway and I would say the cost of going aligned with the Suir Valley Railway was perhaps (between) two and a half and three million Euro, in case anyone has any doubt about it but that resource is simply not available again.”

The CEO said the Council’s intent is to “create, where we can, the conduits within the urban area – any place that we do works – so if you took the arterial routes, the Old Kilmeaden Road and other roads, they’ve been future proofed to the greatest extent possible in terms of providing width and otherwise. We’re doing the same thing in Bilberry. It’s just that it’s really, really difficult in terms of the topography but there will be choices to be made in the future.”

He added: “And when we see the development in Gracedieu, for example, we’ll be working with the NTA (National Transport Authority) over the next while to do a completely new traffic model for the city and it will incorporate and analyse some of those issues and putting the new development into the analysis and we will have choices to make on the likes of the Bilberry Road. It may be the case that that will be one-way for example – there may be a circuitry route – if we’re to really put a big emphasis on sustainable transport (in Gracedieu), well then what you might have is a greenway and you might have a bus priority lane with the railway running on that for example. So it’s not that it’s ruled out into the future; we’re creating the maximum width that we can at the moment in terms of reasonable cost, but it will need political choices, to be honest, around the use of the asset that’s available.”

Looking 10 to 20 years down the line, Mr Walsh believes the Bilberry/Greenway corridor “is a particular opportunity that we need to take advantage of”. 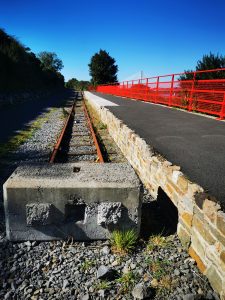 End of the line: the Suir Valley Railway at Bilberry and its adjacent platform. 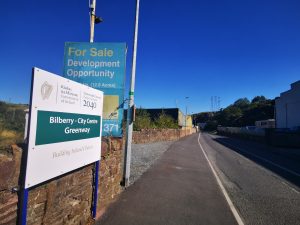 The Bilberry section of the Waterford Greenway will eventually be linked to the city centre thanks to Project Ireland 2040 funding.