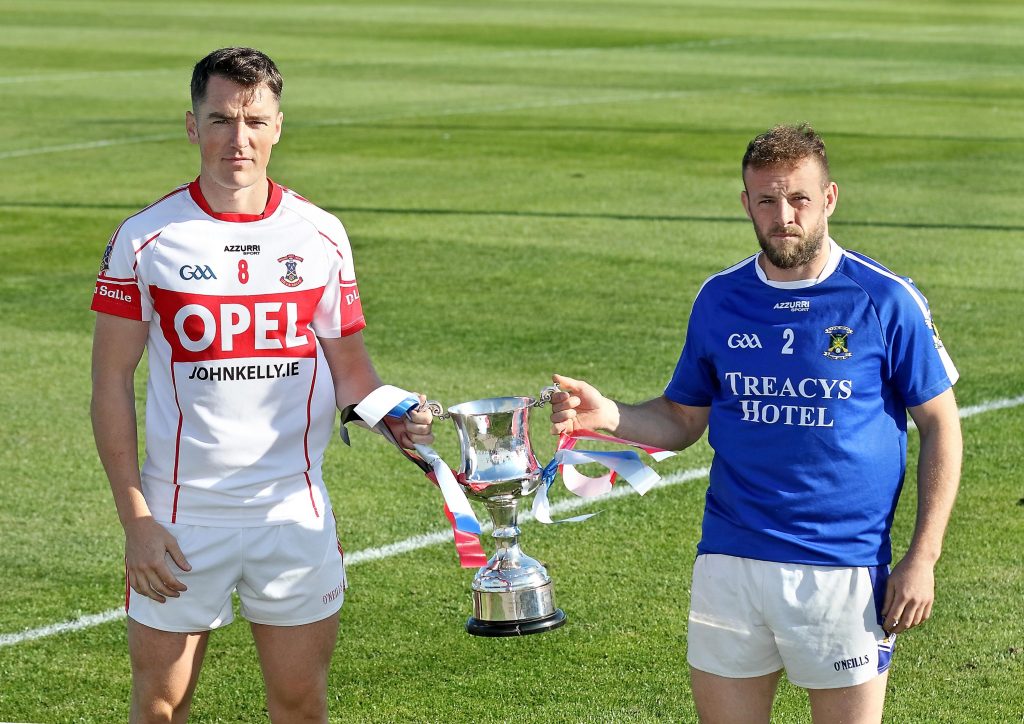 City rivals De La Salle and Mount Sion go head to head in Walsh Park on Sunday next to decide who will face the winners of the earlier clash that same day between defending champions Ballygunner and Dungarvan in Fraher Field.
De La Salle will go into this game as the form team, having come through their Group unbeaten before going on to beat Roanmore in the quarter finals. Mount Sion on the other hand have proved something of the surprise packets of this championship, fortunate to get past a fourteen man Clonea side in the playoffs they hit the ground running in the quarter finals to see off a fancied Lismore outfit and on Sunday they will be seeking to gain revenge for last year’s thirteen point quarter final defeat by the team facing them.
De La Salle will be bidding to reach the club’s sixth county final since making the breakthrough in 2005 with a dramatic win over then defending champions Mount Sion before losing on their first final appearance to Ballygunner. Their next three final appearances in 2008, 2010 and 2012 resulted in three victories over Abbeyside, Dungarvan and Ballygunner respectively, the first two followed by Munster Club success, with the clubs last final appearance being just two years ago in 2017 with an eight point defeat at the hands of the Gunners.
Mount Sion won their 35th Senior title in 2006 and have only appeared in one final since then that being in 2014 when going down to Ballygunner by thirteen points. Their last semi-final appearance was in 2017, on which occasion they suffered a twenty point defeat by the Gunners.

12 MONTHS AGO
Having seen off Mount Sion in last year’s quarter final De La Salle were strongly fancied to reach the decider and put it up to Ballygunner but they were ambushed in the semi-final by Abbeyside, going down by a single point. This year they have very much the same team with very capable and experienced campaigners on board in such as Kevin Moran, Michael Doherty, Jake Dillon, Eddie Barrett, Dean Twomey and Paidi Nevin who have tasted championship success. Last year De La Salle competed in a fourth successive county U-21 final, losing out to Abbeyside having won the previous three. Many of the players involved on those winning teams made their way into the senior side in recent years and now, with senior campaigns under their belts the likes of Shaun O’Brien, Shane McNulty, Adam Farrell, Shane Ryan, Tom Moran, Eddie Meaney and Cormac McCann have come of age and have been making their presence felt throughout this championship.
A big addition to Brian Phelan’s squad this year has been the return to action of Jack Fagan. The former Meath and Waterford U-21 player missed out on last year’s championship but is back and playing better than ever being his team’s top scorer in the current championship. De La Salle’s most impressive performance to date was their crushing twenty one point defeat of Dungarvan in the Senior League decider and though they had to pull out the stops to beat a dogged Roanmore side in their championship quarter final they showed there that on their day they are a side to be reckoned with.

SION HAVE IMPROVED
Despite going into this game as rank outsiders Mount Sion’s chances cannot be easily dismissed here. They will feel they are a better side now than when they faced De La Salle last year. Their only defeat this year was when going down by a point to last year’s beaten finalists Abbeyside and though they struggled against a battling Clonea side, that subsequently showed their mettle when crushing Fourmilewater in their relegation playoff, they showed a big improvement in their ten point win over Lismore. Like De La Salle they have a hard core of seasoned campaigners in Ian O’Regan, Mark Hoban, Owen Whelan, Martin F. O’Neill and Michael Gaffney while on a given day county players Austin Gleeson and Stephen Roche can prove the difference between victory and defeat. While De La Salle’s younger players have proven themselves on the back of U-21 and minor success Mount Sion will be looking to players from their defeated minor final sides of 2017 and 2018 to make their mark more quickly. Players like Luke O’Brien, P. J. Fanning, Jack Meaney, Alan Kirwan, Charlie Costelloe and Evan McGrath have slotted in well this year but will face their biggest test on Sunday.
Everything points to a De La Salle victory but the possibility of an upset should not be ruled out.