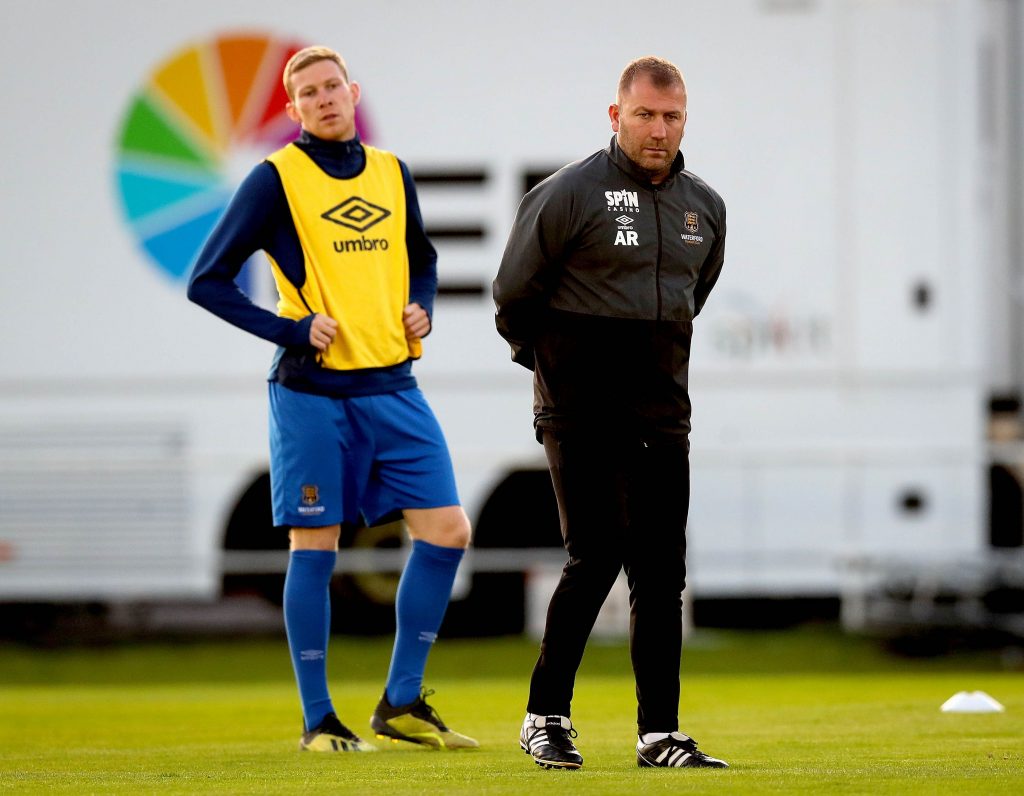 Waterford FC manager, Alan Reynolds, admitted on Friday night that he’s in the dark about Lee Power’s plans for the club going forward.

Waterford FC manager Alan Reynolds is uncertain what the future holds for next season as he waits to hear Lee Power’s plan for the 2020 SSE Airtricity Premier Division season with the Blues boss also considering his personal options.
Reynolds, who is on a leave of absence from the FAI in order to be manager at Waterford FC, could be set to a move back to his FAI Development officer position in Wicklow should Power decide not to have a go at the league next season.
The Blues boss has had a torrid time this season with a budget cut before the season start causing its own problem before his charges also lost out on European football and after losing a host of big name players, he is now left dealing with a cloud of uncertainty for next year.
Speaking after Friday night’s defeat against Dundalk FC at the RSC, the Blues boss said, “It’s hard to know what’s going to happen for next season and I suppose that the ball is in Lee Power’s court to be honest. As of now, I’ve been told that I can’t sign players.
“I have to wait for the go ahead and I suppose people will be looking at the likes of Zack (Elbouzedi) and all these fellas, but my hands are tied at the minute. I’ve to wait on the owner to see what he wants to do for next season.
“In relation to my own position. I’m still on leave from the FAI. It’s hard to know where I’m at with it if I’m honest and I still have a bit of thinking to do on it. I think that a lot of what I’ll decide will depend on what Lee is planning on doing. If we’re not planning on having a go at it and trying to push on, I don’t think I fancy it.”

FRUSTRATING NIGHT
Commenting on the game, Reynolds said, “I’m glad to see the back of Dundalk to be honest. It’s frustrating because I felt that we probably deserved something out of the game particularly in the first-half, but I’ve just said down there that if you get chances against a side like these than you have to take them and we didn’t.
“It’s hard to get near them at times as well and there was a spell there for 20 minutes of the second-half where we barely got a touch of the ball. We were probably afraid to push on and leave it open, so the game became dead and that’s the way it was.
“I thought that there were some really good performances from young players that are still learning their trade in this division. I think that we have a bit to do to catch up to Dundalk, but we’re doing the best that we can do.
“We did have a couple of half chances to take the lead in the game even with some free-kicks in the area and that was the same the last night we played them because we’ve had chances against them, but like I said you’ve got to take them otherwise you have no chance.
“It’s a poor goal, but look Rob is a young lad. He is still learning the game after coming up from the Munster Senior League. He is a good lad; his attitude is great, and he is learning the game. Unfortunately, he has made mistakes against Rovers and tonight that he would probably get away with in the Munster Senior League, but he is worth persisting with. We need to just fine tune a few things and he’ll be a good player.
“Tonight was the fifth time that we’ve played against Dundalk and you admire them at times. Anyone that knows anything about the game would see that tonight and if you don’t see that then I really don’t know what you’re doing here or what game you’re watching. It’s not just as easy to go press them or get up tight to them because you will leave yourself wide open. They are a really good side and as I said that’s the benchmark.
“Shane Duggan did have a chance to equalise late on and it comes onto his wrong leg. I think that in the last few minutes we started putting balls into the box and we needed that bit of luck. I’m saying that we still a win to be absolutely safe. I changed it around a bit tonight because of all the games that we’re playing.”

SHAMBLES OF A SEASON
“I think that with four games to go, I have to give everyone a chance. I look forward to giving Darragh Power a chance as well because he has been really good in training. There’s four games left and it’s four games that we want to win.
“We’ve set ourselves a target for the last four games and we’ll see where that goes. I’m sure that the four teams that are playing against us are thinking that they are winnable games. I’ve been in dressing rooms as a coach where the season is over and teams down tools, but I don’t think that’s going to happen here.
“We have five games left, including the game in Scotland so we’ll try win them all. The flights are booked for Scotland game and it’s the first team that’s going. It does depend about the Sligo game because there’s a chance that will be on the Tuesday before we go on the Thursday or on the Tuesday before we go to Finn Harps.
“It’s ridiculous but look I don’t want to start going on about that again. You look at Dundalk tonight, I think it’s their 14th game in 28 days or something mad like that plus they play again on Monday. The way our season has been handled and the fixtures situation has been a total shambles.”