“We need to move forward as one football family” – Flavin 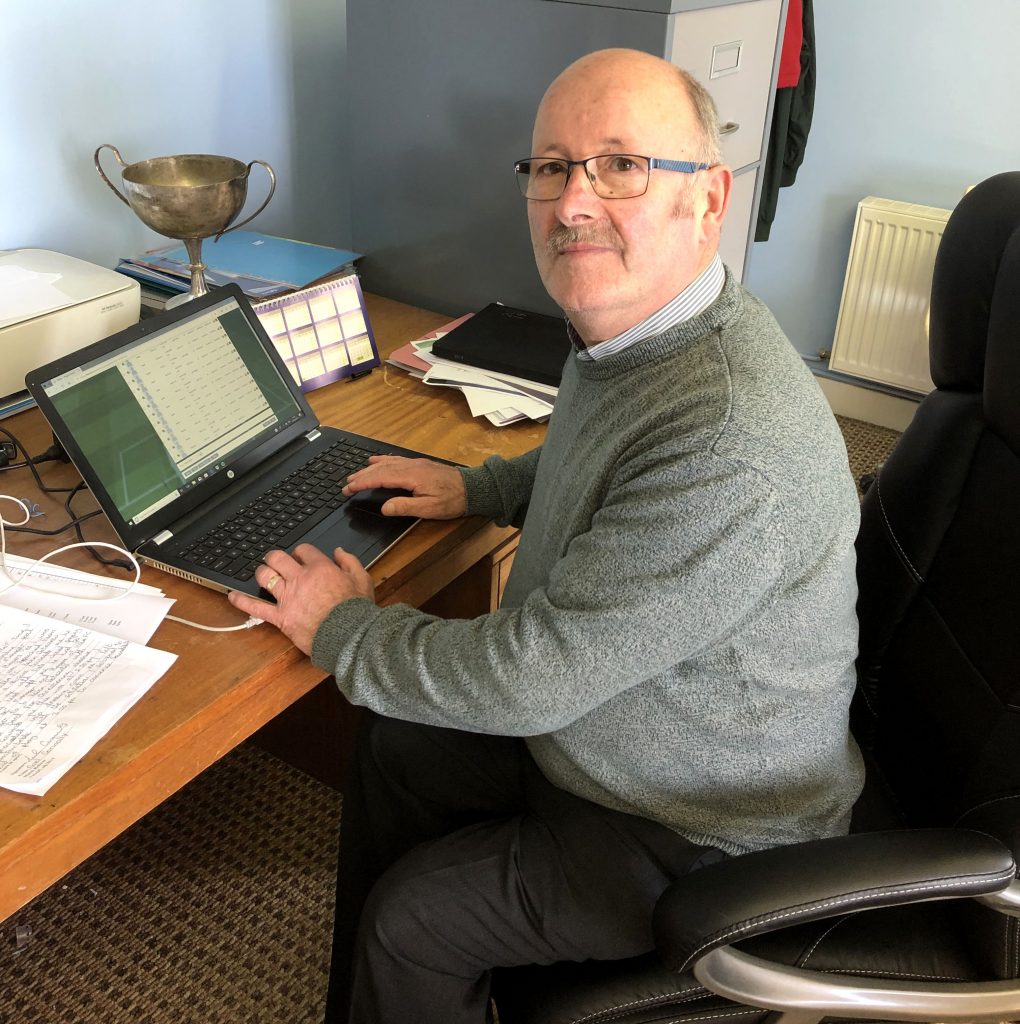 Ozier Park looked a picture under the glorious September sunshine this week as groundsman Tom Murphy continues to take care of his pride and joy with great attention. But behind the door of the famed committee room at headquarters, league secretary Martin Flavin was answering more queries.
With the new registration system now in place this season, it has caused problems, but as always, the efficient administrator takes the call in his stride and it’s another secretary from one of Waterford’s rural clubs hangs up a happy man.
After spending over four hours the night previous at the same table hearing disciplinary cases, he finally takes time out of his busy day to talk soccer and the issues that are currently facing the Waterford Junior League committee.
Flavin, who was himself a well-established goalkeeper and referee, joined the committee ten years ago and despite making the decision to step down a couple of years ago, the 67-year-old has no regrets up to this point for making the decision to return.

PLENTY OF IMPROVEMENT
“I’m happy with how things are going. I’ve found that there is a lot of improvements and things are being done right since I’ve returned,” said the Tramore man. “It’s something that I always want no matter what I’m doing, I want it done right. I’m not saying that we won’t make mistakes because we will, but at least we’re trying to get them done right.
“That’s my aim in life and always has been. My aim right now is to get football in Waterford on the right track, which is achievable. I want football in Waterford to be able to help each other, all the leagues to help each other and that we can be one league, and one football family. That’s my aim and that would be improvement.
“While there is a lot going on within the FAI, it didn’t have any effect in the running of the league here in Waterford. We had a say in what was happening with myself and John Foskin, our chairman, meeting with the governance review group as part of the Munster football group.
“I don’t think that it has had a major impact at grassroots level, but it may do down the line because of funding. I always felt that John Delaney or whatever CEO was there in football terms shouldn’t have been going around the country giving out money. He should have been at headquarters seeing everything was right.
“We are dealing with a new registration system this year online and it has had some problems. But nothing that can’t be solved. We’re lucky to have Brendan White on board in this department as he has done an unbelievable job and has had a cool head with clubs, which has been widely welcomed. He’s been brilliant.”

SERIOUS ISSUE
One of the biggest problems facing the league right now is the abuse of referees. Flavin continued, “The committee have grave concerns about the abuse that referees are suffering at the minute and we also understand that it’s a two-edged sword, that players and managers deserve the respect of match officials.
“I think the big problem is down to the assault of a match referee up the country and the FAI have stricter guidelines as regards the suspensions. We, as a league, are no longer able to deal with assaults on referees, they go straight to the FAI with a minimum ban if proven starting at 36 months.
“We have had a couple of incidents this season that have raised eyebrows. First, can I say that we didn’t use any video evidence in the disciplinary hearing involving the Premier league game between Hibernians and Villa and solely acted on the referee’s report.
“We can’t use video evidence on one game and not use it on another game. Every player and manager are treated equally once they come through the door. We are always fair, but we are guided by the FAI disciplinary system, which has been in place for the last couple of years.
“It’s fair to say that we are seriously concerned about the level of refereeing and the level of abuse. We are also aware of incidents that aren’t being reported to us and like I say, the referees and the clubs have a responsibility to report all these incidents to us.
“We are encouraging people to take up refereeing, but I’m not sure that’s possible if the level of abuse isn’t lowered. I accept that it goes two ways and the referees have a responsibility to give respect to players and sometimes that isn’t always the case, but all we can do in that regard is to try improving relations.”

OZIER DEVELOPMENT
Commenting on Ozier Park, Flavin said, “We’d obviously like to see Ozier Park being used more as we’ve put a lot of development and money into it. We’ve floodlights, a 200-seater stand and we’re looking at doing other work around the place in order to bring up the standard of the ground.
“As a committee, we’d like to have bigger dressing rooms, a bigger committee room and maybe a function hall area, but the funding or money for that type of project isn’t there at present. As everyone is aware, parking is a problem here in Ozier Park. I think that the stewards that we have do a good job, but we need to look at it.
“We are 100 years in existence in 2024 and we will be hosting the FAI Annual General Meeting so who knows what lies ahead down the line. We are in talks with Villa FC. As people know they are planning on building a new astro-turf facility and although we haven’t seen the plans yet, they have asked us to come on board.
“There could be a parking facility there for up to 200 cars with a driveway off the Outer Ring Road, but that will be further down the line. It’s great to see Ozier Park in such brilliant condition at the minute and that’s down to Tom Murphy. He is still doing work on the pitch at present that hasn’t allowed us to host our youth trials on it, but we’re confident that it will be ready in the next couple of weeks.
“We are thinking of ideas to utilise the grounds more and we’re hoping that we’ll have some other ideas in the not too distant future. As I said, we’ve put a lot of money into Ozier, club’s money, and we need to get the best of out it.”

NEW BLOOD
Flavin is also wary of the fact that the league committee is an “ageing” one. “I don’t mind that being said at all because it’s true. One or two of us know how to use a computer, but it stops there. We certainly need younger people on this committee especially with IT skills because that’s the way the world is gone.
“The committee is worried about the future. We’re constantly asking people that might do a good job to come on board, but as you know a lot of good people are involved with their clubs and don’t want to leave them down.
“I think that the clubs have a big responsibility to stand up and get people. At the end of the day, we’re not the league, we are just the committee of the league and the league is the clubs. I think that they have a huge responsibility more than ever to put people forward. I’m ten years here now and not one person has been put forward by the clubs. If it’s not addressed, I can see there being a big problem soon.
“We’re in a very good financial state that we’re able to offer interest free loans to any clubs that are undertaking projects. We feel this important as it’s the club’s money. We’re always try to improve things and we’re always open to suggestion or ideas that will be for the betterment of football.”