A nature-loving Wicklow teenager was in Waterford last week as part of an environmental awareness tour which took him from Dublin to Kinsale, availing of public transport and his own foot power for transit.

Finn Cahn (17) undertook an impressive #run4ourlives tour of the eastern seaboard, ultimately taking him from the capital to the tip of Wild Atlantic Way, all in a bid to champion nature and sustainable living.

“My love for nature literally grew there and from there, I was talking to adults and going to permaculture events and that really deepened my awareness and interest in permaculture – it’s a design for gardens, social enterprises and so on – and it’s basically a way of working with nature rather than against it. And the idea for this came from me wanting to do something, I wanted to take action in some way and apart from everything I’m already doing – I’m one of the organisers for the school climate strikes – so I decided to run to events. I began this on the 20th at the School Climate Strike in Dublin where there were 10,000 people; I spoke in front of them and told them what I was doing. So from there I went as far as Edible Bray, an organisation which is planting plants throughout Bray. I’ve been taking some public transport here and there between my runs as my main goal is to show up at events but as long as the majority of my day is spent running, I’m happy.”

By Wednesday afternoon last, the longest run he’d clocked up was 20 kilometres, with his final on foot approach to Kinsale taking in 24k. However, running isn’t something that Finn, despite having the frame of a middle distance athlete, is particularly au fait with.

“Funnily enough, I actually only started training two weeks before I got going! I just decided to get into it; I felt there was no better time to start so I jumped straight into it. And so far, I’ve been holding up pretty well physically.”

A student at Wicklow Sudbury School, founded in 2016 (“It’s free learning. You get to learn what it is you want to learn and we all have equal votes in democratic decision making.”), Finn is as affable as he is articulate.

“My school community has been behind me on this run, my parents and my siblings have been a great support too, looking for places for me to stay and events to go to and Mick Kelly of GIY Ireland put me in touch with your newspaper and with certain schools and people to talk to. So today I went to Tramore Educate Together and talked to the TY class at Newtown School and I had such a good time at both schools. The students were absolutely brilliant. Then I came here to GROW HQ which is such a good example of what sustainable living and making sensitive use of the land can be all about.”

Detailing his chats with students and other groups, Finn continued: “I tell them about how I got involved in nature and how much I care. Then I open it up to the room to find out what’s on their minds, to find out some more about what it’s like to be a 16 or 17-year-old, living with the climate change crisis hanging over your shoulder. I’ve never been one for retaining a whole load of facts about climate change but I do speak from the heart and I know that as a 17-year-old, caring about making small, practical changes we can all make does matter. Someone my age shouldn’t be doing something like this, I should be at home playing music and doing the things that I love. But the response I’ve got from the schools I’ve visited has been amazing; learning about planting trees and reducing the use of plastics. People my age are so ready to get involved in this movement.”

As for the strides (literally in his case) that teenagers have to make to be taken seriously when discussing climate change, Finn replied: “There is an element of looking towards the older generation and looking to the Government and saying ‘what you’ve done is horrible, what you’ve done is wrong and you need to take action’ and then the Government is sitting there telling us how inspiring the youth are without they themselves taking any action. The reality is they need to take action now. And for me, to something like this is all very new and it’s a little bit tough but I’m so willing to take this on because of my love for nature and how much I care for it.” With voices like Finn Cahn’s making themselves heard, perhaps our future will be entrusted to more capable and caring hands. One suspects we’ve not heard the last of him.

With thanks to Michael Kelly of GROW HQ/GIY. If you want to find out more about Finn and his campaign, visit his Twitter feed at @finncahn (#run4ourlives) 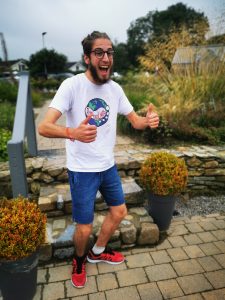 Finn Cahn, who was in Waterford on Wednesday last as part of his #run4ourlives trek from Dublin to Kinsale.