“THE phone here didn’t stop ringing,” said Michael Walsh, reflecting on the immediate reaction to his being robbed in broad daylight on Portlaw’s Lower Queen Street, just minutes from his Brown Street home.

“I went down as far as the roundabout (Malcomson Square) that evening (Thursday, September 19) and a lot of people came over to me, asking me how I was. Sure people are great, now this wasn’t the way I needed reminding of it. How one man could do that to me or to anyone at all escapes me, but the neighbours have really been great.”

Speaking to the Waterford News & Star, Parish Priest Richard O’Halloran said the local reaction to the crimes inflicted exactly a week apart on Michael Walsh and John Foley, was testament to the town’s sense of togetherness.

“I’ve been here for five years and the first thing that struck me about Portlaw was the level of community spirit,” he said.

“There’s a huge pride in the place and the care that people have for each other, it’s second to none. The people of Portlaw love their town and look out for each other. And when it comes to the elderly, the attention that’s given to them, especially to those older residents who are living on their own, the time that people take out of their own day to call in and see how their neighbours are doing, is unbelievable.”

Mr Walsh and Mr Foley, said Fr O’Halloran, had been the victims “of opportunistic crime”. He added: “John simply walked out of his house to have tea with a neighbour while Michael was just out on a walk, as he is every day. Both incidents were awful and they’ve shocked the place. However, in the face of that shock, these crimes have rallied the community and even more so now, we need to exert a greater sense of care and vigilance for each other and to keep our eyes more widely open to cars and behaviours we don’t readily associate with our community.”

A public meeting to discuss the recent criminality in the area will be held at the Portlaw Community Hall this Thursday evening at 7.30pm.

Local Councillor and Waterford Joint Policing Committee Chairperson Declan Clune recalled a spate of burglaries in the town and its environs during the 2012/13 period that catalysed the introduction of a community text alert system.

“Things after that did calm down,” said the Sinn Féin representative, “but the sad reality is that you’re never going to have zero crime, even with all the resources you could possibly put into something. But we all do what we can locally to prevent or reduce serious crime and the text alert has been very successful – a number of people have been caught either before something had happened or immediately after committing an offence. But it’s crucial that if that system is going to work that it works properly from the Garda side of things and for me that’s where the weakness is at the moment. It’s something which they’re aware of, to be fair, and which they’re committed to addressing.”

A text alert in relation to John Foley’s burglary didn’t arrive until 11.10pm on September 10, according to   Cllr Clune, while “no text at all came” in relation to Michael Walsh’s 10am pickpocketing on September 17. This prompted Cllr Clune to send a message himself to those on the alert list a few hours later.

“If you’re expecting people to engage and have faith in the text alert service, then it has to work,” said Cllr Clune, “otherwise they’re not going to bother”.

He concluded: “To be fair, the service has worked well over the last few years but the two recent incidents in Portlaw have, unfortunately, been two situations when it hasn’t worked the way it’s meant to.” 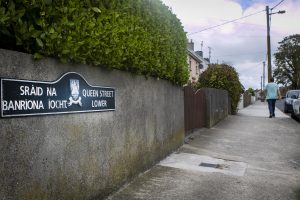 Michael Walsh was robbed in broad daylight on Portlaw’s Lower Queen Street on September 19.
A public meeting following two recent robberies will be held at the Community Hall this Thursday. Photo: Joe Evans