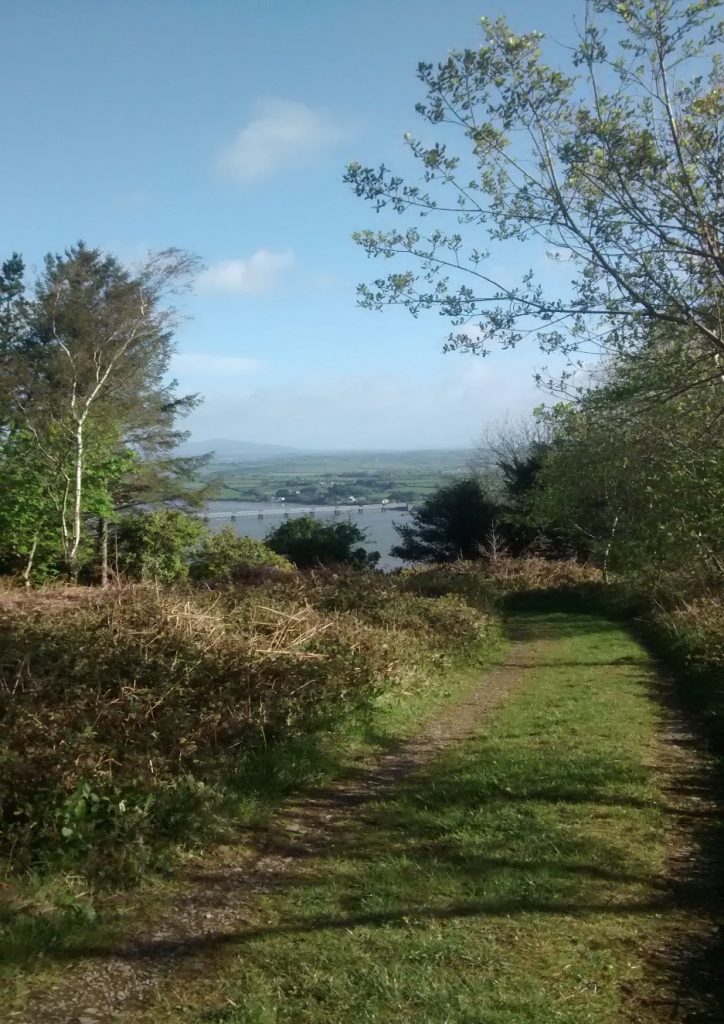 An inviting track on the Minaun by author

A 6.5km loop walk along quiet county lanes and woodland tracks in one of the oldest landscapes of Gaultier, textured by nature and history.

From Faithlegg Church head towards Cheekpoint. A visit to the graveyard on your return will open up many pages of history, including the story of Catherine Bennett of Tasmania who married Thomas Francis Meagher, and William Dinn who sailed with Captain Cook. Note St Ita’s Well on your left as you pass. At 500 metres take the first turn to the left, a paved lane leading to a T junction. The famous 18th century Waterford architect, John Roberts, built a house here, Knockrotton (thought to mean the rock of the rushing stream). Go right at the junction but note that a left turn brings you to Faithlegg House. Continue down an even quieter lane almost to the end with the river Suir in view. Take the obvious forest track to the right having carefully ignored other inviting tracks on the way.

A slow but gentle climb brings you to an area of mixed woodland with recent plantings of birch, oak and pine where the climb begins to level off. Keep to the main track which brings you through a very wide gap in the 18th century deer park wall.  You are now on the Rhododendron Walk section of the route. An observation belvedere, the Lookout, a little further on is inviting.

Continue along the track to where it divides, in front of an embankment possibly with barbed wire across it, into downhill and uphill routes. Go uphill to the cleared area where there is a short detour to a viewing point offering splendid views out to sea and westwards over Waterford Castle to the city and beyond. Return to the forest road and at the entrance to the forestry go left and then left again downhill (for a rewarding detour from the junction go straight on uphill past a forestry gate for superb views).  Continue to the junction with Cheekpoint where a right turn brings you to the Crossroads and shop in the village. Follow the main Waterford road up and over the eastern flank of Faithlegg Hill (the Minaun) and back to your start point. Pause here and there en route to take in the splendid views of Waterford Estuary.

To Hell or to Connaught. Faithlegg and Cheekpoint and land stretching to Passage was granted to the ancestor of the Aylward family, Juvenis Ailward, when the Normans arrived here in 1170/71. For the next 450 years the Aylwards remained the dominant presence in wealth and influence. In the 1650s the Aylwards lost their lands to the land-grab of the Cromwellian plantation resulting in them and their workers and farm animals being forced into the long trek to Connaught, part of the To Hell or to Connaught genocide-like migration. The Faithlegg branch of the Aylwards were compensated by a grant of 2,400 acres in a much further afield Ballinakill Parish, in the Barony of Leitrim, Co Galway, and by 1677 Peter is granted a patent on that land. The Aylward Faithlegg lands went to Captain Bolton of the Cromwellian family and a descendant, Cornelius Bolton built the present Faithlegg House in 1783. His ambition was greater than his purse and he was forced to sell the house to the Mahon Power in 1819. In the early 20th century the De La Salle brothers bought the house and remaining lands and opened a training college there.

As noted in an earlier article, Faithlegg townland was part of the Aylward lands in the area which included Cheekpoint and the other townlands of the area including Coolbunnia and the two Kilcullens.  The medieval parish of Faithlegg with its 14th century church, the ruins of which still stand, was one of the first parishes in the country established following the Synod of Kells in 1152.

The Trees of Faithlegg Hill. Even as early as 1654 in the official records, Faithlegg Hill (The Minaun) has been graced by a lovely covering of trees. In that year Faithlegg was described as having a timber wood, the only one described as such in the Barony of Gaultier, the other woodlands being referred to shrubby woods. Penduculate or Common Oak (Quercus Robur and in Irish Dair), Birch (Betula Pendula and in Irish Beith) and Holly (Ilex aquifolium and in Irish Cuileann) were the more common of the native trees. In the late 18th century Cornelius Bolton did some extensive plantings and I suspect the present covering of Spanish Chestnut (Castinea sativa and in Irish Castáin) on the northern slope of the Minaun dates from ancestors planted by Bolton.

We know of Bolton’s endeavours from the account written in 1776 by Arthur Young, the renowned British agriculturalist and traveller who stayed with Bolton in Ballycanavan House.

In more recent times Coillte has planted and harvested coniferous trees, Sitka spruce and Pine and made the hill more accessible to walkers, especially by maintaining some trails. All but two of the seven ‘nobles of the forest’ enumerated in the Brehon Laws – Oak, Ash, Holly, Hazel and Pine – are to be found here in abundance.  What are the missing two (perhaps lone examples can be found but certainly not in abundance)? Send your answers to [email protected] and you will be in the draw for a surprise.