A MAN who is said to possess a ‘Jekyll and Hyde’- type character received a six-month prison sentence at Waterford District Court on Tuesday last.

Joseph Falconer, with an address at Number 11, Suir Crescent, Mooncoin, was charged with trespassing at the Brothers of Charity premises at Belmont, Ferrybank on July 14 and for a public order offence arising from a reported domestic disturbance at a Mooncoin housing estate on June 24.

Falconer, who has 64 previous convictions, admitted to the Belmont offence which was detailed to Judge Kevin Staunton by Garda Sergeant John Phelan, with Gardaí called to the scene at 3.20pm on the date of the offence.

The June 24 charge saw Gardaí called to investigate a public order matter at a housing estate in Mooncoin at 8.25pm, by which time Falconer had left the scene.

Falconer was subsequently apprehended and was found to be in a highly intoxicated state and unsteady on his feet; despite this he had to be physically restrained at the time of arrest.

At the time of last Tuesday’s court appearance, Falconer was also on remand for another matter to be brought before the Circuit Court subject to the serving of a Book of Evidence.

Defending solicitor Hilary Delahunty said he would spare Judge Staunton an account of his client’s “long history”, opting instead to present a more concise synopsis of Falconer’s recent goings-on.

In the November/December period of last year, Mr Delahunty said Falconer had managed to “bring himself back from the brink,” having stopped offending while also returning to the family home. However, in the interim, Falconer had “fallen off a cliff again” due to his taking alcohol, a substance which has proven “toxic to him and all around him”.

This predilection to alcohol, the court was told, had led Falconer to live rough on the streets of Waterford for a period, with Mr Delahunty noting the court’s familiarity with his client’s circumstances.

“Joe Falconer (who has a partner and two children) can do well when he really tries, but he has no answer to alcohol,” said Hilary Delahunty.

“He is a thorough gentleman when he is not drinking which I know of since he is a local and a neighbour of mine in some respects. Unfortunately, there is a Jekyll and Hyde element to his character.”

In relation to the trespass charge, Mr Delahunty reminded the court that no burglary had been committed by his client at Belmont.

He also expressed his wish that whatever penalty would be imposed by Judge Staunton would allow both himself and his client alike to apply themselves to the pending Circuit Court matter.

Judge Staunton said that Falconer has been before the court “on numerous occasions” and appears to be a man who “goes completely off the rails when he drinks”. Also noting that Falconer had trespassed onto the property of an organisation “which does tremendous work”, the Judge imposed a six-month prison sentence. 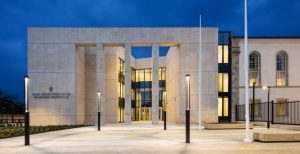