VIEW FROM THE GREEN ROOM: Chicago at Garter Lane 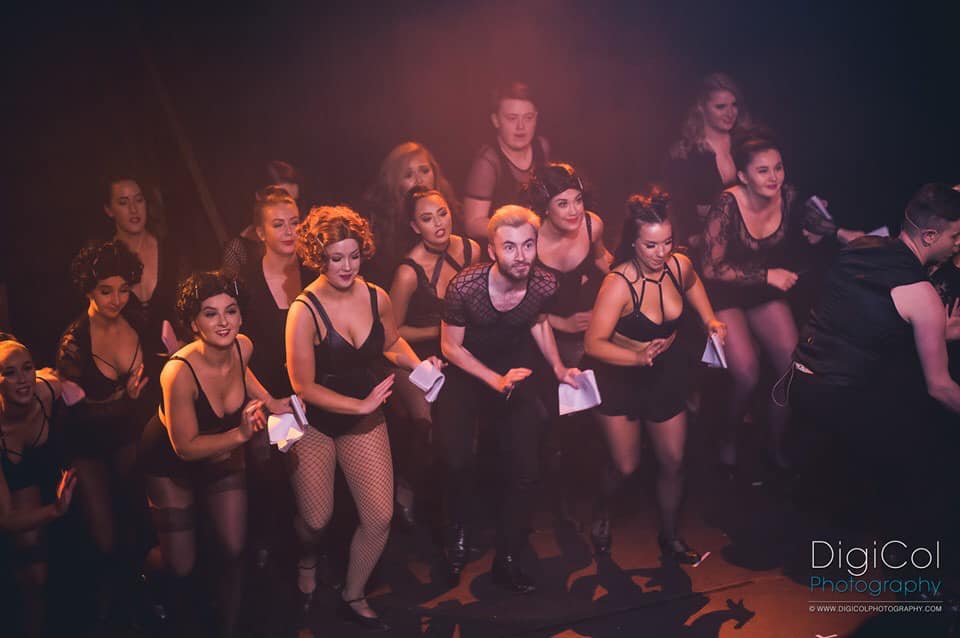 JACK Cunningham Productions presented a sell-out run of the hit musical Chicago at Garter Lane last week. When you consider that Jack is all of 18 years old and has just done his Leaving Cert, it’s an extraordinary achievement by any standards. Even more extraordinary is the physical demands of a show of multiple scenes and raunchy dance routines with belt-soprano numbers.

Jack is already an imaginative choreographer and talented director. However, he must stay offstage if he wants to continue as a director. Not only does he direct and choreograph the show, but he appears in many of the dance routines and also plays a smashing cameo in the minor role of Fred Casely. Nevertheless shows need a director who is not on stage to step back and look at the overall production in order to sort out difficulties. Sound levels on opening night were far too high in Act 1 and the lighting design was too dark and inaccurate with spots searching for performers. Lines, on occasions, were delivered in darkness and singers sang in a pink-red wash of low level light that made it difficult to see the actors as they moved upstage in all-black costumes that merged with the all-black wooden set.

Despite the obvious technical difficulties, the Chicago score is infectious and Jack Cunningham’s production pounds along. Dance routines are leggy, punchy and in-yer-face, as is the acting. Subtlety is out the window and the only bones made are in the backing tracks.

Jennifer White gives her best performance so far as Velma Kelly. Jenni sings and dances with style and conviction and really nails the part of merry murderess Velma. Emma Walsh – who is also the musical director of the show – brings a subtly understated and thoughtful performance to the role of fellow murderess Roxy Hart and delivers her killer numbers with passion and panache. Director Jack Cunningham’s clear separation between the two roles works well and is one of the features of the show.

Tom Rogers is a smooth crooner who razzle-dazzles as the sleazy lawyer with the dollar-bill eyes whose only concerns are the moolah and himself. Ray Collins is a loveable, sweet Amos, ignored by everyone except the audience, who is the show’s sweetheart. Although overdressed for the part in a smart cardigan and slacks – he is, after all, a greasy slob of a mechanic – Ray’s ‘Mr Cellophane’ is one of the standout moments in the show. Anne-Marie Collins is a suitably butch Mama Morton who acts and sings with conviction while managing to keep order among the killer-widows. Brian Flynn is a suitably coy and camp Mary Sunshine that provides many laughs as she bellows out her commentary on court proceedings.

Alan Fitzgerald is excellent as the cynical, smartass Master of Ceremonies who delights in the misfortunes of his players and Jack McGrath is a delight in the dance routines throughout. In fact, both Jack McGrath and Jack Cunningham are the best male dancers we’ve seen in Waterford for a long time.

Despite the technical difficulties, strong performances and imaginative dance routines made for an entertaining night at Garter Lane.