LIAM O’Callaghan’s faith has taken him far from home. The Portlaw man has spent over 20 years as a Columban Father in Pakistan, a country which for decades has been riven with social and political crises and where terrorism remains all too real a threat.

There are many, many places where Liam’s vocation could have taken him, but when it comes to “the land of the pure”, it’s clear that he’s in it for the long run.

“I do get home every year now,” Liam told me prior to his latest departure back to the city of Hyderabad, home to almost 1.8 million residents.

“I was home for five weeks this summer and the plan is to be home every year from now on, primarily with my mother in mind. I’ve decided to come home every year for a shorter break now, so this was the second summer in a row I was back in Portlaw.”

Given how long he’s been based in Pakistan, initially in Lahore before moving south to Hyderabad in 2016, Liam’s concept of home has adjusted somewhat over the years.

“The longer I’ve been away from Ireland, the more of a stranger I feel to it in some ways,” he admitted. “Things change, people change, a lot of older people move onto better things and younger people of course have changed. Twenty years is a long time in terms of that kind of change so the connection to where I was born and reared has changed. The connection to people when I’m back is different.”

Mass going numbers in Ireland have, from a clerical perspective, been going in the wrong direction over the past quarter century. Liam doesn’t see that situation reversing itself.

“I don’t see it turning around, no. You literally see no young person in the church now. Their parents are equally absent so in the space of that generation, it’s been literally lost. For me, there’s no understanding of what faith is and what the church is so I don’t see it turning around. I think the church itself is struggling to make any,” he says, briefly pausing his stream of consciousness. He continued: “It’s almost irresponsible to be kind of sleepwalking over the edge because the clergy control everything in terms of the running of it, the sacraments and it’s literally dying out in front of your eyes and it’s nothing short of irresponsible to let that happen. Whatever alternatives you could be looking at in terms of deacons, married priests, women priests or whatever, they’re not even being attempted even though for 20 years we know the figures and what way they’ve been going.”

In other words, the fundamental conversation that the Vatican needs to have about future proofing the church in Christendom is not being publicly aired. Said Liam: “I’ve great time for Pope Francis in many ways. His vision is inspiring. Yet he is being blocked internally to a large extent by Vatican insiders and the Curia, there’s huge opposition to him in that sense. But even he is not open to women priests which is disappointing but he does have a clearer vision of what ministry is about, being rooted in compassion and justice, that’s inspiring to me. But I’m disillusioned by the ‘higher ups’ in the Vatican and the way they have ‘blocked’ him. It’s a strange reality.”

Liam’s move to Hyderabad from Lahore, 1100 kilometres away in the north east, has taken him to a province with “a different way of life, with different types of people from different backgrounds. And it did take me a while to settle”.

Explaining his move, Liam said: “The Columbans are dropping in numbers so we decided we couldn’t try and keep two areas going at the same time so we decided to close one (Lahore) and stay in one area just to try and be together for support. In the Hyderabad Diocese, we now have six priests and two lay missionaries – not huge numbers – but that’s the way of it. New western missionaries haven’t been coming for many years; a newly ordained priest came from Fiji and another is coming from The Philippines this year so that’s provided an injection of new life for us but the intake is always going to be small.”

Being based in an Islamic Republic which has historically proven a cold house for Christians, life is far from straightforward in a country which, according to Transparency International’s 2018 Corruptions Perception Index ranks 117th out of 180 states.

Writing in the Columban Newsletter last March, Liam opined: “Corruption has seeped into all aspects of life and has become virtually endemic; the damage is incalculable.”

He told me: “In general, the country is really struggling economically. Inflation has really gone through the roof, prices are soaring and another IMF bailout happened only a few months ago. A common and persisting problem here is enormous inequality, and sectarianism is prevalent. It’s been four decades or more since extremist violence made its latest reincarnation in terms of Al Qaeda and the Taliban in particular. Now it’s not as bad as it used to be, it seems to be under a bit of control now, but that violence has shaped things quite a bit.”

Liam added: “Poverty remains a significant problem here and in terms of Christians, they’re just stuck at the bottom of the heap to a large extent apart from a few exceptions. But Christians are mostly stuck in a rut, they’re living with a ghetto-type mentality and have been unable to make a breakthrough. And there is a certain level of discrimination against them as well for sure, along with other minorities. Overall, it’s a pretty bleak outlook. This is a country with a huge population of 207 million and another major issue facing Pakistan is climate change; it’s said to be the seventh most affected country in the world in terms of climate change and month on month, year on year, there have been increases in mean temperatures and of course you have the unpredictable monsoon rains which have led to so much flooding in recent years. Air quality is poor and water quality is probably an even greater challenge.”

Given Liam’s sentiments, I put it to him that Pakistan represents a tangled and hugely problematic web. “Yeah, I think it is. And Sindh (the province where Liam now lives) is bleaker. Lahore, through the centuries, was a traditionally cosmopolitan area, it was the capital of many empires and it’s retained some of its old grandeur. It has beautiful parks and other amenities and it has a fairly affluent minority area so it was a city with a sense of escape to it. There was a relative comfort to it. That’s not the case in Hyderabad. It’s virtually absent of all the features which make Lahore such an attractive city; it’s an altogether more harsh environment and culture, and sometimes it wears me down, to be honest. That lack of an outlet gets into your bones a bit. It’s so, so different to home in Waterford; there’s no such thing as a pub, there’s few places you can escape to in terms of clearing the head so yeah, it’s tough going.”

The prospect of serving a parish at home for a term is something Liam O’Callaghan has toyed with. “I’ve got commitments and various things that I’m involved with at the moment. Getting back to Waterford has, after all these years, always been about having a break, spending time with my mother and my family so it’s hard to know if I’d ever make a permanent move back. Mass is certainly not what it’s all about; there’d probably have to be a whole rediscovery of what you’re trying to be about, about what the Christian message is, about what ministry could be like. There’s a massive amount of people who are lost and have no idea what it’s about and then there’s a huge element of hostility (towards the church) so you’re up against a very different reality.”

The “clerical nature” of the Catholic Church, is, in Liam’s view, “its downfall”. “The approach taken to the sex abuse scandal and other crises appear to have been based on protecting this clerical state and to me that’s missing out on what we’re meant to be about. We could have very viable parish committees in Ireland without any priest made up of very good people, committed, faithful and pastoral, who could look after the financial end of things as well. We need to go back to a whole new beginning, to the early church which were composed of local communities, run by local people themselves. This clericalised state of things is what has done the damage. A return to what the early church was might be its saving grace because then you’re talking about a church that’s rooted in community and faith and sustained by people who are there to serve. Going back to what once was there could bring about a new beginning.” 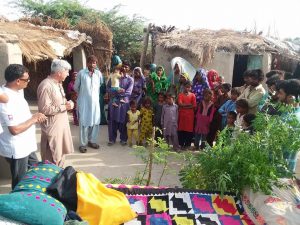 Fr Liam O’Callaghan (second from left) pictured during a tree plantation at Hyderabad, a city he moved to in 2016 after a lengthy stint in Lahore.