Review: From Lucifer to Lazarus: A Life On The Left by Mick O’Reilly (Lilliput Press)

SINCE independence, the Irish political left has been largely lampooned by both the predominant governing classes and the media commentariat.

The fact that left leaning parties (Clann na Poblachta, The Workers Party, Democratic Left) have struggled to remain singularly intact or have descended into the political abyss, is regularly cited by critics who’ve questioned their genuine appetite for government.

That Mick O’Reilly’s memoir regarding his own life on the left has coincided with Paul Murphy’s departure from Solidarity, is emblematic of a widely held view: that the Irish left’s greatest foe has traditionally been within.

As O’Reilly himself admits in ‘From Lucifer to Lazarus’: “What is lacking in the Left, however, is unity and cohesion. Competition is healthy, and you don’t have to be enemies. I despair of the Far Left’s tendency to fall out with each other.”

With a general election looming, and no discernible sign of the left establishing a common policy platform to provide voters with a genuinely alternative proposition, the frustrations expressed in Mick O’Reilly’s memoir show no immediate signs of resolution.

And given the historically small gains made by card-carrying communists in local or national chambers, the workers’ republic James Connolly espoused over a century ago remains a pipe dream.

Mick O’Reilly is a man whose company I suspect I’d enjoy, even if the political principles he holds dearest don’t hold a great deal of heft given the near negligible impact that communism has made in this State’s parliamentary history.

“I didn’t half believe in communism,” O’Reilly writes. “I fully believed in it.” How so escapes this reader given the ideology’s international legacy: Stalin’s gulag, the banishment of intellectuals, the USSR bankrupting itself to compete in the space race, the Chernobyl disaster, etc.

When he writes: “I didn’t quite see the Russian as imperialists like the Americans in Vietnam or the British here,” I couldn’t help dwelling on the 14 other territories of the USSR Moscow governed for almost 80 years, in addition to the Warsaw Pact states and the 1979 invasion of Afghanistan.

One doesn’t have to dig too deep to take issue with O’Reilly’s political stance; that he describes TK Whitaker as “a negative influence” on Sean Lemass, widely hailed as this country’s most forward thinking Taoiseach, is a rare proclamation.

He contends that Whitaker “turned Lemass, sounding the death knell for Fianna Fáil”. Yet given that Fianna Fáil have led 12 governments since Lemass left office, it’s difficult to ascertain how he could reach such a conclusion.

Yet O’Reilly can hardly be accused of being wide of the mark when writing: “The Soviet Union was condemned as a one-party state, but in Ireland we’ve had a one-policy state. The fundamental policies of the two parties have been pretty much identical since the mid-1950s, bar the odd tax cut here or there. This has become even more obvious since the 2006 election with a minority government based on cooperation between Fianna Fáil and Fine Gael.”

Trade unions, one of which (the National Union of Journalists) I’ve been a member of for almost 20 years, unquestionably have their place. Granted, their relevance generally only falls into focus when you’re caught in an industrial foxhole. But there’s no doubt that our office and shop floors are fairer spaces due to the efforts of dedicated shop stewards right across this island.

Consider the impact made and long-standing commitment of Unite in securing payments for Waterford Crystal pensioners and, more recently, at Belfast’s Harland and Wolff. Checks and balances for employers are as relevant for employees as they are when reversely applied.

In that instance, having leapt into more than one trench over the years, Mick O’Reilly can reflect with pride on his shoulder to shoulder support for workers throughout the country, a quality acknowledged by Packard staff in Tallaght in their face of their plant’s sadly inevitable closure.

That O’Reilly remained so resolute in the face of the suspension he and ATGWU colleague Eugene McGlone unfairly received in 2001 and true to the cause of trade unionism ever since speaks volumes for the quality of his character. As Gene Kerrigan notes in his introduction to the book, Mick O’Reilly remains “an implacable class warrior”.

And while the political inclination Mick O’Reilly champions is unlikely to pack a meaty punch any time soon, the detailing of his life in trade unionism makes ‘A Life On The Left’ a book worth sticking with.

As O’Reilly points out in his acknowledgements, the stories of “workers like us rarely go to print – our stories are usually told by others”. In his case, this story is clearly one that was worth telling and sharing.

From Lucifer to Lazarus: A Life On The Left by Mick O’Reilly (169pp, Lilliput Press) is priced €16 and is available in bookstores and online at www.lilliputpress.ie 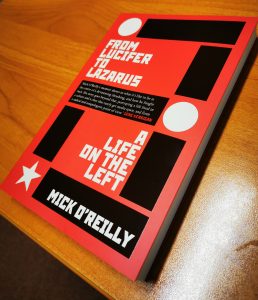