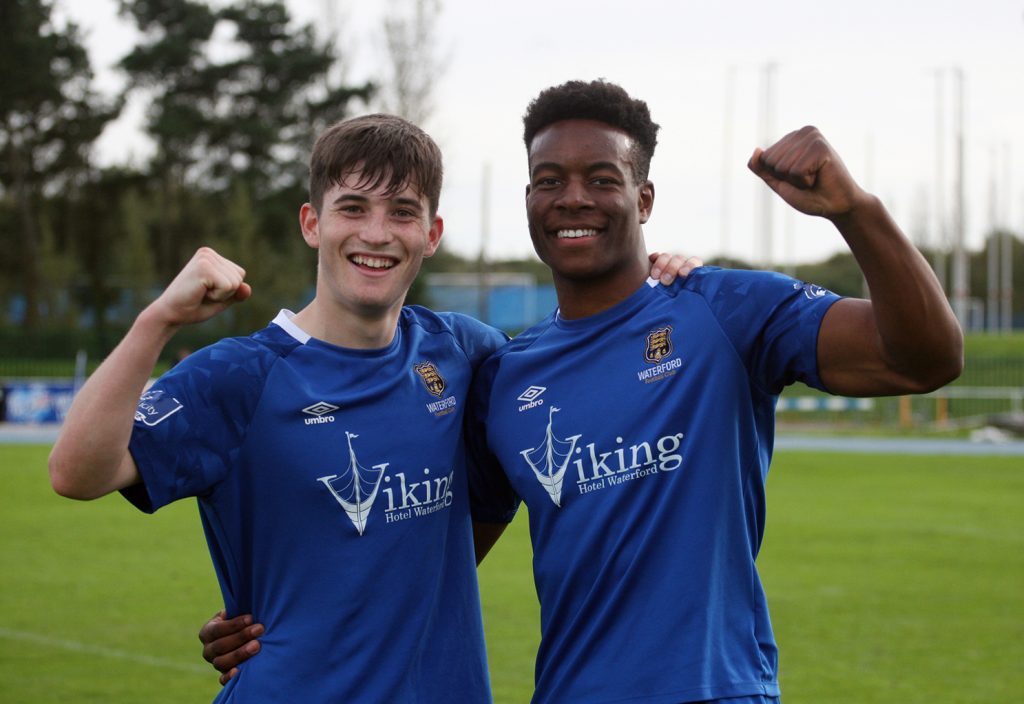 Blues goalscorers against Dundalk in the U19 Cup at the RSC last Sunday Colm Whelan with penalty and Success Edogun with a brace. Photo: Paul Elliott

Success Edogun struck a late brace that included a 93rd minute winner to snatch victory from the jaws of defeat after a pulsating SSE Airtricity Under 19 National League Quarter-final tie against Dundalk at the RSC on Sunday afternoon last.
After the visitors scored what looked to be a winner from their viewpoint, Edogun, who had replaced the injured Alex Phelan late on in the game, was on hand to score two rebounded effort that steered the Blues in the semi-finals of the league.
It was the home side that created the first chance of the game on three minutes when they won a corner kick out on the right side that saw left-back Danny Reynolds whipped in a great ball to the near post for Mike Nzongong, but his free header went inches wide of the far post.

BLUES IN FRONT
The Blues took the lead from the penalty spot on 13 minutes when Colm Whelan’s left-wing corner kick was handled by Gabriel Adebambo that saw referee Pat O’Connor point straight to the spot, but fail to dismiss the player, and it was Whelan that kept his calm to blast the spot-kick past Dundalk keeper Harry Hogan.
Dundalk were level seven minutes later when Reece Murphy was guilty of giving away a needless free-kick out on the right side when fouling Jamie Wynne and it was the latter that equalised when he touched home Adebambo’s free kick from six yards.
Blues keeper Charlie Heffernan was called into action to turn an effort from Aaron McNally over the bar on 25 minutes from the resulting corner kick the Lilywhites should have scored. Gabriel Adebambo sent in the delivery from the right that Heffernan lost sight of, but Lido Lotefa somehow headed wide from close-range.
There was a major let off for Dundalk keeper Hogan at the other end three minutes later when Danny Reynolds linked up with Alex Phelan down the left-channel before he cracked in a shot that went through the hands of the netminder, but the ball spun out of play for a corner kick to save his blushes.
Adham Masood combined set up Colm Whelan for the Blues’ next chance on 31 minutes when the attacker got free out on the right-side, but Harry Hogan got down low at his near post to turn the ball around the posts.
Blues captain Dean Beresford came to his sides rescue in the final minute of the half when Jordan McGuire sent in a left-wing corner kick to the back post for the inrushing James Carroll, but his effort was cleared off the line by the midfielder.
Colm Whelan nearly regained the lead for the Blues with the first chance of the second half on 57 minutes when he got free out on the left before turning onto his favoured right-foot, but his curling strike from 16 yards went narrowly wide of the far post.
Alex Phelan could have put his side in front two minutes later when he picked up the ball on the right-side of the area, but his shot was saved before Regix Madika should have scored from the resulting corner-kick as he hooked the ball over the bar after Darragh Power had flicked on Whelan’s left-wing corner-kick.

SUCCESS THE HERO
The Blues spurned another good chance to go in front on 69 minutes when Darragh Power got the better of Himson Ira down the right side before pulling the ball back for Colm Whelan, but the centre forward blazed over from just inside the area.
With the hosts on top, Jamie Holden was the next player to go close a minute later when he was teed up by Power, but he couldn’t direct his 18-yard effort on target before Phelan went on a run down the left on 75 minutes however he dragged a left-footed shot wide of the far post.
It was an amazing finish to the game as there were three goals in the final minutes with Success Edogun proving the hero for Waterford. Dundalk thought that they had won the game in the 87th minute when Lido Lotefa pounced deep inside the penalty area to fire home a Jordan McGuire free kick, but the Blues levelled seconds later.
Colm Whelan was the man that spotted the run of Success Edogun, who had replaced the injured Alex Phelan minutes before, and after his first effort was superbly saved by keeper David Adumoso, he made no mistake when scoring the rebound.
Edogun proved to be the match winning hero in the third minute of second half injury time when he again got on the end of a Whelan pass and after he was denied by the keeper, he managed to bundle the close-range rebound to the net to ensure a remarkable win for Gary Hunt’s charges.

Waterford FC will play Drogheda United in the semi-finals.