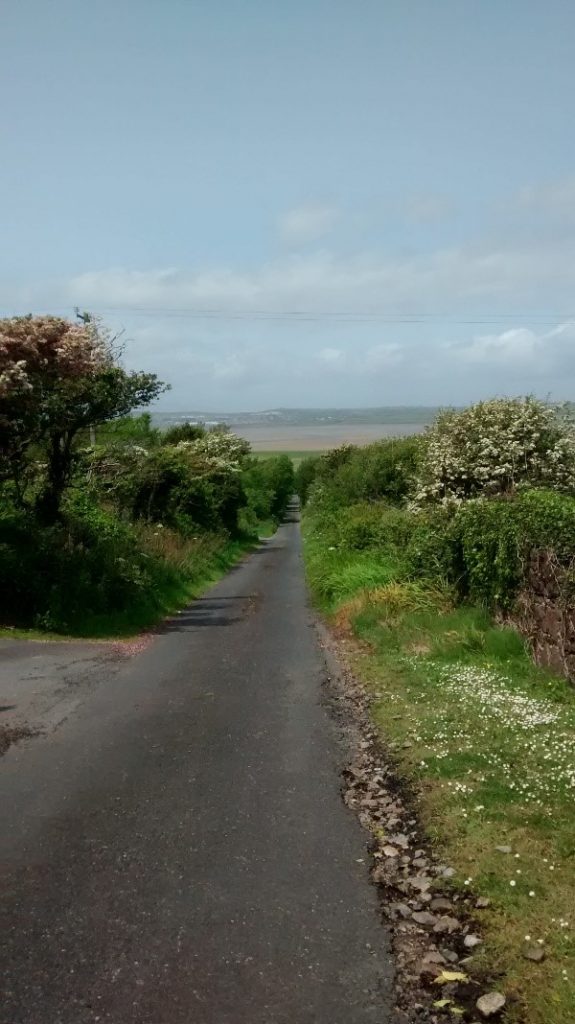 A 3.2km walk over quiet country lanes, sand-dune and beach with captivating views over Tramore Bay. A glorious ramble richly textured by nature and history.

From Saleens Car Park go left uphill. A left smaller private lane halfway up leads to Corballymore House where the legendary Mrs Clemm lived and treated all willing customers to her delicious 7 layered chocolate cake. At the Crossroads and before you turn right, pause and look behind you to the captivating view over the Tramore Backstrand. Continue then on the Brownstown road for about 1km where you turn right onto a lane – Fitzgerald’s Lane – that eventually descends to the shore. There is a sharp and potentially dangerous slope to the beach. Do not take this unless you are training for the Iron Man competition.

Instead, go straight on apparently into the bushes a few metres further on where a narrow but well used grassy track opens for you. Follow this over the low and relatively level embryonic sand-dunes. In late summer and early autumn note the vegetation of the sand-dunes, the blackberry-like dewberries were abundant when I walked here in late September. Continue on towards a higher dune and just before reaching it branch off to the beach. Further on as you approach the slipway leading to your start point note the whitewashed grotto (photo below) with a statue of the Blessed Virgin. A local resident, Terry Winters, in 1954 to mark the Marian Year erected the grotto. Around this time two local fishermen, father and son, John and Michael Fitzgerald, were drowned off Brownstown Head and the grotto since then has become part of their remembrance. It is fitting to acknowledge the people who have taken care of the grotto over the years, Patricia and her son Jim Caulfield of Coolum.

Start/Finish: Saleens Car Park (from the airport road junction with the Dunmore-Tramore road go left towards Brownstown. 3 kms on turn right down the small rural road that leads to Saleens beach. Car park is at the end of this lane); Distance: 3.2km; Time: About 1½ hours allowing for stops; Suitability: Easy.

The lane up from the car park runs through the townland of Corballymore. Two hundred metres along the Brownstown road from Corbally Crossroads you enter the townland of Lisselty. Canon Power gives Lios aolta meaning whitewashed lios. There is no sign of a fairy fort or rath on the first ordnance map of 1839 but there is a substantial lios not far away in Corballymore. The latter’s origin in Irish is Corr an Bhaile, the point or peak of the homestead according to Canon Power, a somewhat mystifying translation. According to Power there were two townlands in the medieval parish of Corbally, Corballymore and Corballybeg.

The eastern end of Tramore Bay with a tide-covered sandspit running east west outside the entrance to Saleens and Rinneshark is the site of the worst maritime disaster of the south-east coast. HMS Sea Horse, on transit duty bound for Cork from Ramsgate had close to 400 souls on board when she was driven into the eastern side of Tramore Bay just under Brownstown Head. Anchors were put out but dragged and the doomed ship went aground on a shoal about one mile from the sand-dunes. It was January 30, 1816 in daylight hours when the storm broke her in two. There were many acts of selfless heroism, soldiers and their wives holding their families in their arms. Babies were put in trunks in a desperate move in the hope that they might be washed ashore alive. 363 men, women and children died that fateful afternoon… on your walk pause perhaps near the grotto where the Fitzgeralds, father and son, are also remembered… and a thought for all who go to sea.

Sand-dune ecology. Dewberries (Rubus caesius and in Irish Eithreog) are among an interesting and seasonally colourful quilt work of plants and insects on the gently rolling sand-dunes behind the Saleens beach. They are somewhat like blackberries but their low growing prostrate habit and silvery matte hue distinguish them from the former. Delicious to taste – yield to the temptation. Marram grass, the building block of the dunes abounds and here and there you will find the flowering sea-holly. The dunes here in Saleens have stabilized and are anchored not only by the aforementioned marram grass but by the scattering of wind shaped shrubs including blackthorn.