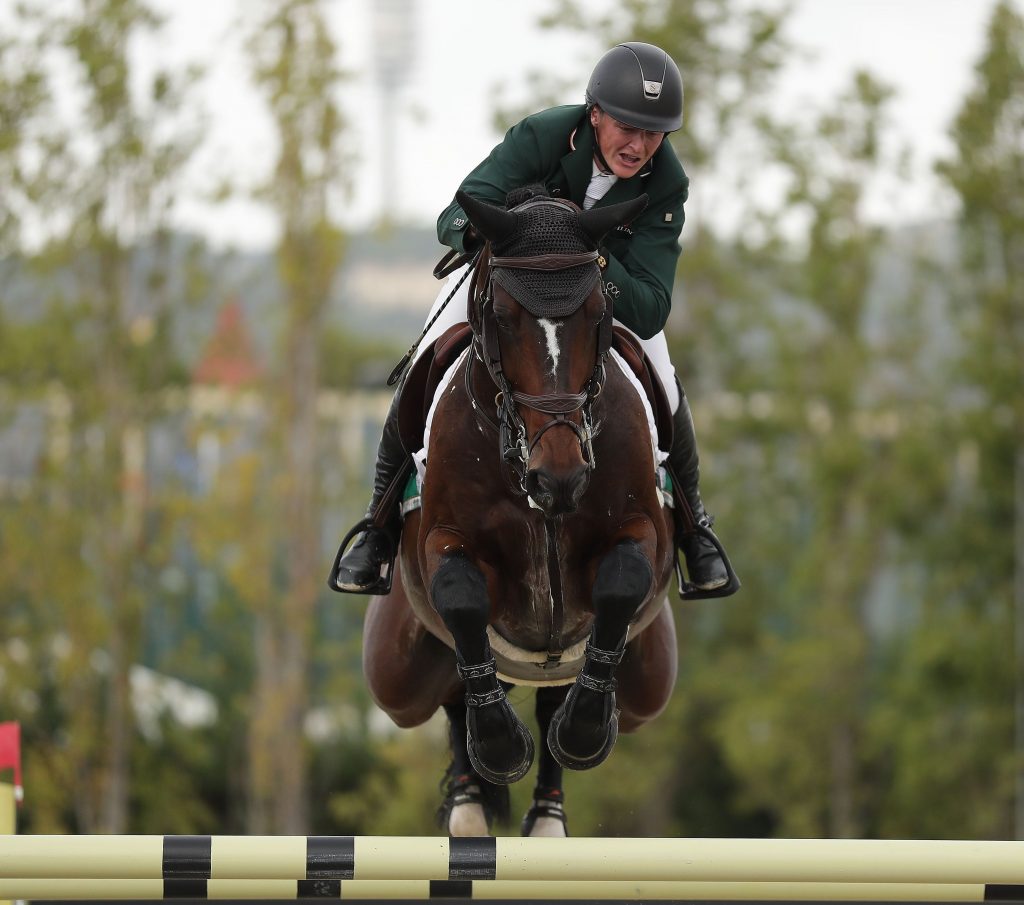 The Irish Show Jumping team have qualified for the Olympic Games for the first time in 15 years, by claiming a magnificent victory in Sunday’s €1.25 Million Longines FEI Nations Cup World Final in Barcelona.
A stunning performance from Rodrigo Pessoa’s team of Peter Moloney, Paul O’Shea, Darragh Kenny and Cian O’Connor, saw them finish the competition on a score of just one time fault, to beat the best teams in the world and book the all-important ticket to Tokyo 2020. The result means that for the first time in history, Ireland will be represented at an Olympic Games by teams in Eventing, Dressage and Show Jumping.
A day of drama saw Waterford’s Peter Moloney and the Team Harmony-owned Chaiti’s Champion get Ireland off to a good start, when he finished with just one fence down, which was the best round of the competition at that stage.
A superb clear round from Ireland’s second rider, Paul O’Shea with Skara Glen’s Machu Picchu, owned by Machu Picchu Partners LLC, put real pressure on Italy and Colombia – Ireland’s rivals for the Olympic place.
Another clear followed from Offaly’s Darragh Kenny with Balou du Reventon owned by Ann Thompson, and when Colombia and Italy’s third riders both picked up faults, Ireland’s place at the Tokyo Olympics was secured with one rider still to jump.
The battle to win the Longines FEI Nations Cup Final still hung in the balance however, and a third Irish clear round from Meath’s Cian O’Connor with PSG Final, owned by Ronnoco Jump Ltd, saw Ireland heap pressure on Belgium who had been leading. The last Belgian rider looked to be heading for a clear round which would have given them their second Nations Cup Final win in-a-row. However Gregory Wathelet’s and his horse MJT Nevados S had a run-out at the combination on the final line, meaning Ireland would be crowned Longines FEI Nations Cup winners for the first time in history.
Irish team manager Rodrigo Pessoa was a happy man after: “We had a very clear objective coming here, to get the ticket [to Tokyo] and the five riders that were here fought really hard. It’s a lot of pressure. People don’t really realise the amount of pressure that is on these riders to bring this qualification home. The weight of the country is on their shoulders. It was a big ask for them today and to do it the way that they did – hats off to all five of them.”

‘GOAL ALL YEAR’
West Waterford man, Peter Moloney said, “This was our goal all year to qualify for the Olympics. I am very lucky to have a very good horse in Chianti’s Champion and that makes it a little bit easier. We are very fortunate to have great backing from all the guys on the team and from Rodrigo and from Horse Sport Ireland and all the High Performance Committee.”
Horse Sport Ireland CEO Ronan Murphy said “Horse Sport Ireland is immensely proud of our High Performance Jumping Team and their fantastic achievement of securing qualification for the Tokyo Olympic Games. History has been made this afternoon as for the first time ever Ireland has qualified our three equestrian High Performance Teams (Jumping, Evening and Dressage) for the Summer Olympic Games. Huge congratulations to Peter, Paul, Darragh and Cian who kept their nerve under immense pressure and delivered this fantastic result for Ireland.
“I would like to thank the support teams, grooms, and especially the owners of the Team Ireland Horses who are a such a pivotal part of Ireland’s success. Special thanks also to our High Performance Director Rodrigo Pessoa and his support team, Michael Blake, Taylor Vard and Gerry Mullins, who have played a huge part in delivering this result and expertly guiding our High performance Jumping programme in recent years.”
The Irish Show Jumping team is sponsored by Devenish & The Underwriting Exchange Equiline – Official athlete clothing supplier of Team Ireland Equestrian.