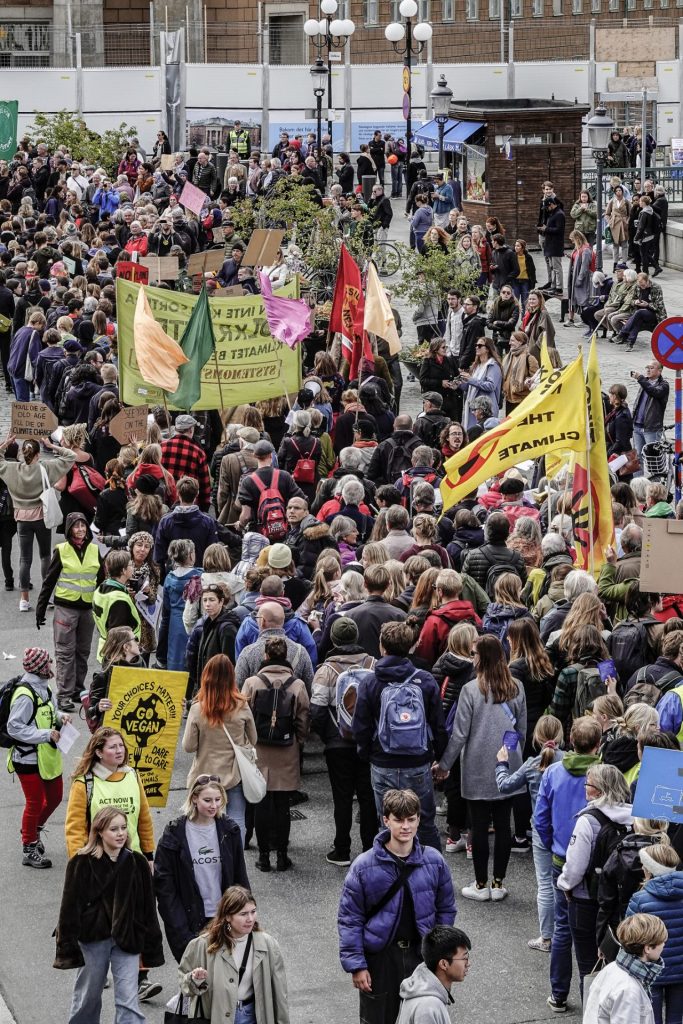 ALL across news programmes and social media sites the newest and youngest campaigner for climate change is pictured with her searing stare and Pippi Longstocking plaits. Greta Thurnberg, the sixteen year old Swedish teenager has become a public icon. In her jeans and runners she seems so small and unassuming yet she has become an unlikely activist and has inspired a global movement among young teenagers. It all began with her striking from school every Friday in protest at her perceived inaction on the issue of climate change. This has now expanded in such a way that she is now addressing hundreds and thousands of people at international gatherings and inspiring a whole new generation to stand up and be counted.

This young girl is a vocal campaigner for environmental change. She says it how she sees it, at times brutally honest and outspoken. Maybe it’s on account of her Asperger’s syndrome that she can speak so freely and so passionately about what she cares about. She refers to this as her “superpower” and has stated that this allows her to be more direct and straightforward. There’s something very refreshing about Greta Thurnberg. She is not plastered in makeup, wearing form-fitting trendy gear with an expensive hair style. In fact quite the opposite. I think that is why I am more inclined to listen to her. She is interested in more than her immediate surroundings. She is looking up from her phone, if she has one that is. She is not afraid to be different and the ultimate result is that people are listening and paying more attention, and ultimately that is all that is required for things to change.

Now local teenagers are jumping on the bandwagon and beginning to walk out of schools of Fridays in support of Greta and her campaign. They are taking to the streets with homemade banners and signs and demanding change. There’s nothing like the passion of youth to stir things up a little. I love to see them getting excited about things and taking an interest in international issues. But I wonder are they just jumping on the bandwagon. In fact, I bet not one of them went out on the campaign trail without their state of the art mobile phone being charged. I bet they all brought cash for a plastic bottle of water and some food afterwards and I can imagine that not many of them walked home either.

The recent photographs of the aftermath of such a rally for climate change in London do nothing to allay my unease on their commitment to the cause. Once the crowd dispersed and the teenagers had left the scene, Hyde Park was pictured littered with plastic bottles and food wrappers. The very thing that the teenagers were supposed to be rallying against. This makes me think that they are just campaigning for the sake of it and not really getting onboard with the message that the young Swedish girl is so passionate about.

Teenagers are inherently self absorbed and selfish for the most part. That’s not a personal attack, that’s just adolescence so this doesn’t surprise me hugely. I don’t see them refusing to go on holidays and giving up charging their devices in order to reduce their carbon footprint. But maybe they can start with the little things. Reduce plastic wrapping at the supermarket, car pool where possible and be more creative with food to reduce waste or spoilage. Yes, it is not their generation who caused this crisis, but they are products of it and if they are as passionate and as outraged as they want us to believe then they need to stay in school and become educated on how best to bring about change. They need to look up from their phone and become the change they want to see…sh Mum’s the Word.

THOSE little bath bombs you see in pharmacies and specialist shops look almost too beautiful to put in your baths. In fact they almost look like treats. You can nearly taste them. They smell so lovely and look so inviting that they are nearly irresistible.  Except we know that they are for the bath. Children on the other hand don’t. I watched in horror and amusement as one little child picked one up and promptly took a bite out of one. Then began to roar. Washing your mouth out with soap suddenly took on a whole new meaning.

If you struggle to read your kids’ handwriting and the teachers are always complaining about the scrawl they are presented with then let them spend time playing on the monkey bars. Climbing, hanging, swinging and other high energy activities that help build strength in the upper body are essential to develop the fine motor skills. Twisting, turning, pulling and dangling all help the flexibility and agility necessary for rotating shoulders, wrists and fingers. So remember, when it comes to writing, M is for Monkey Bars.