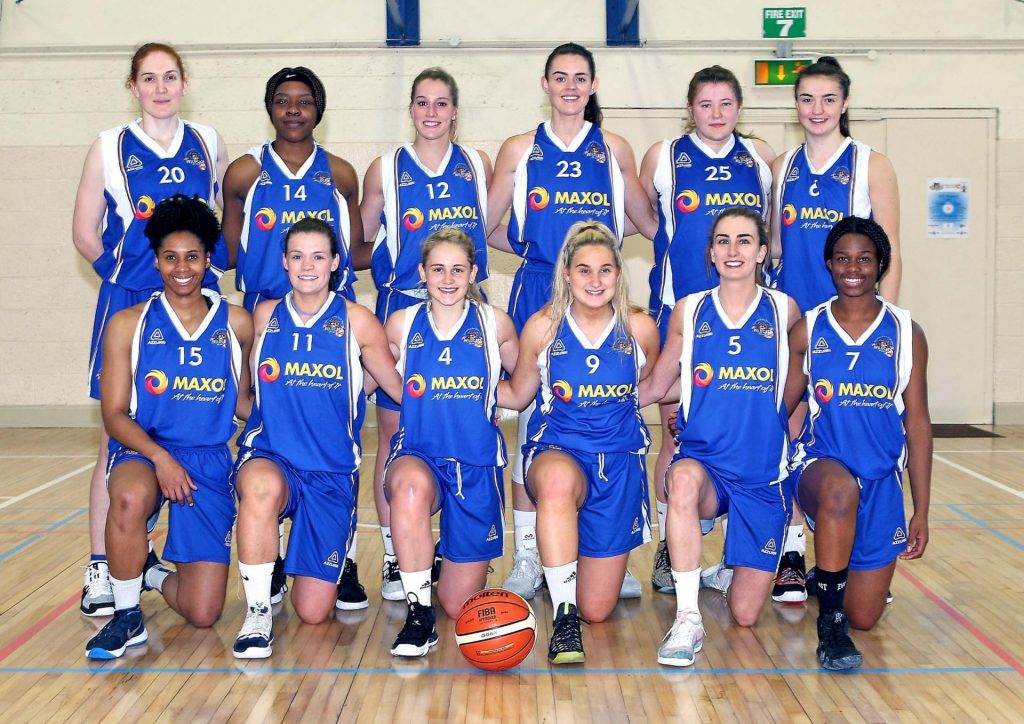 Saturday night entertainment doesn’t get any better than this for a packed Mercy sports hall who saw their favourites WIT WILDCATS win an absolute thriller with a 80 points to 77 victory over Cork rivals Fr Matthews B.C. The visitors were favourites to take the points here but again the big guns tumbled in the Wildcats den where the noise level was unreal from the start to a nerve racking final buzzer.

SUPER START
From the tip off Wildcats started at a ferocious pace and raced into a 24-18 lead at the end of the first quarter. Indeed the home side should have been further in front but failure to finish handy opportunities cost them at least eight points. It was score for score for a time until co-captains Steph O’Shea and Jasmine Walker hit a purple patch to extend Wildcats advantage to 49-38 by the break.
From the restart things got even better with young guns Debbie Ogayemi and Abbey Flynn making massive contributions to put Wildcats up by 20 points. Fr Matthews took a time out to settle and switched American Chantel Alford to the point guard position slowing the game down in search of big outside shots. This worked to perfection and in spite of Wildcats working tirelessly in defence, Fr Matthews blitzed the Wildcats net with five consecutive three pointers to close the gap to just five points. Gradually the Cork outfit edged their way to leave a single point between the teams 61-60 with the final quarter to play.

GRIPPING FINAL QUARTER
At this point the roof was lifting off the Mercy sports hall due the noise of the incredible support. Wildcats were finding scores difficult to come by while once again Cork’s sharp shooters left the home net smoking with more incredible three pointers. They hit a total of eleven from down town on the night. Now trailing by 3 point with 6 minutes remaining, could Wildcats come back? You bet they could as Walker, O’Shea and Kavanagh high three in a row. Now Wildcats were up by three points and hanging on before Sinead Deegan hit a massive three pointer which rocked the neighbourhood. Time out Fr Matthews with just a minute and 35 seconds to play. Two outside shots thankfully came off the rim and Steph O’ Shea ripped away the rebounds.
Wildcats were playing keep ball and running down the clock before one from two on the free throw line and a quality basket from Grainne Dwyer left just three between the teams with 26 seconds to play. Time out Wildcats as coaches Jillian Hayes and Trish Nolan gave their final instructions. Swift movement of the ball saw Wildcats keep possession and shoot with four seconds to the final buzzer. The breaking ball fell to the opposition who had one last chance to save the game. As the long range pass sat in the hands of hot shot Alford the buzzer sounded. The American shot not hearing the buzzer.

FANS GO WILD
Indeed such was the noise nobody heard it and when the last gasp effort blitzed the Wildcats net the visitors thought it was level only to see the table officials frantically waving that time was up before the shot went up. Fr Matthews coaches and players were jumping all over the referees claiming the shot was in good time but the referees indicated that time was indeed up and Wildcats players and supporters gasped a massive sigh of relief.
Over the years there have been massive occasions in the Wildcats den but this was extra special. Hopefully it’s onwards and upwards for Wildcats. However as the excitement settles Wildcats will be aware they have a serious challenge ahead of them away to DCU in the capitals North side at 2.30pm this Sunday. Almost all games are streamed live this season giving supporters the opportunity to sit in the comfort of their home and watch how their team is doing. Whatever the outcome of the game v DCU, another pulsating home fixture awaits Wildcats faithful supporters when Dublin side Killester come to town Saturday week, October 19th …Go Wildcats .!!!
Wildcats top scorers ..Steph O’Shea 22 points, Jazz Walker( 18) and Debbie Ogayemi (10).