Halligan ‘right now’ is standing in next election

WHILE predicting a May 2020 general election, Waterford TD and Minister of State John Halligan has, with some qualification, shed light on his future political intentions.

“Right now I am standing,” he told the Waterford News & Star on Friday last, “but I’ll give it careful consideration. I don’t think the election will be until May myself – now it could be in November but I doubt it. I was speaking to the Taoiseach (on Wednesday last) and I think it will be May because we’re still in a tunnel with Brexit. There seems to be no light at the end of the tunnel, maybe this new proposal (from the British Government) will help a little.

Last Thursday’s news regarding the funding of UHW’s Palliative Care unit, in addition to the timeline for the building of the hospital’s new mortuary and the pending planning submission for the second cath lab represented progress – and relief.

“It’s only right,” said Minister Halligan in relation to the €4.8 million Palliative Care funding injection announced by Health Minister Simon Harris. “I don’t know why the delay arose. I spoke to the Minister on a number of occasions and he was taken aback by it himself. When you give approval to build a building, part of that approval is to staff it.”

Surely this announcement would have been preferably broken prior to last Monday’s ‘Clare Byrne Live’ report regarding the Dunmore Wing, an issue the Waterford News & Star reported on in our August 7 edition.

On this, Minister Halligan replied: “Yes but all I can say, and I have no hesitation in saying this, it appears to me that there are two wings of the HSE with one not knowing what the other is doing. We’ve seen that in so many instances. For some reason there is an inability for parts of the HSE to communicate with other parts. There seems to be an inability to make finance available. The objective seems to be to hold it back as long as you can and this is very frustrating for all of us… but the staff call-out (for the  palliative care unit) will go out straight away, all that the Hospice asked for, they’ve gotten and that’s a good story.”

Regarding the second cath lab, John Halligan stated: “In case there was any doubt about this happening, once it goes in for planning, it’s happening. The money for it, nearly €5 million, is ring-fenced. It’s a complicated build, the engineers have told us. People say, ‘ah, it’s one room’. It’s not like that. It’s very sophisticated equipment and a complicated build on top of what’s already there, with the auxiliary room leading into it and so on. That goes out for planning this month. It’s out of our hands now, really. And the HSE will be giving us an update monthly as to where it’s going, how they can shorten the term – I don’t know what the term is going to be – once it goes in for planning, it goes out to tender and they won’t have any problem getting tenders to build it.”

The largely reactionary and frequently frustrating approach of the HSE’s communications unit to media queries regarding services at UHW has fed into doubts and downright anger expressed via social media.

“I can understand that,” said Minister Halligan. “I’ve set up regular meetings in the hospital with TDs and public representatives and we’re all trying to work together on this. This is about people’s health and the quality of people’s lives in Waterford and the South East. There’s no point in we all trying to score points off each other; other people try to score points off us. But if anybody seriously believes that we’re not trying to get all of these issues over the line, they must be off their heads. Why would we want to do that? And I’ve no problem with criticism, no problem at all but surely it should be constructive. Analyse what you’re asking, analyse the depth that we’ve gone to, to try and get these projects over the line.” 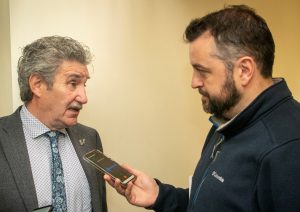