PORTLAW native Sister Magdalen (Margaret) Fogarty has been afforded a Mayoral Reception in Kilkenny city in honour of her trailblazing work with Clann Credo, the social investment fund she founded in 1996.

Joined by many of her relatives from Portlaw in addition to colleagues from the Presentation Sisters, Sr Magdalen, who lives in Kilkenny, was overwhelmed by the many tributes paid to her from Clann Credo colleagues and beneficiaries.

“Well they all certainly gave me credit for anything I did, and it was certainly very nice to have so many positive things said about the work of Clann Credo,” Sr Magdalen told the Waterford News & Star in Kilkenny Town Hall on September 27.

“Social finance, as a concept, wasn’t known in Ireland when I founded Clann Credo, and it was a phrase I wasn’t even aware of myself at the time; I hadn’t a model to look at and copy either. The initial idea that came into my head was pretty simple: if there was a pot of money there and that you could use it when you had a need, whether you were building a house or trying to educate your family or so on, I thought that would be of benefit. And so it progressed from there.”

Sr Magdalen continued: “We don’t all get the same chances in life, we’re all born into different circumstances and for some people, they can’t get out of those circumstances when they’re not in a position to build opportunities for themselves. So I had these ideas in my head for some time before I acted on them; I then had to plan how this was going to work. But once I reached that point, I knew wbat I wanted to achieve.”

In 1994, Sr Magdalen made her case to the Presentation Sisters to provide an initial loan of £12,000 to the Greencaps, a workers’ co-operative in Ballymun which provided work to some of the long-term unemployed in that community.

“Part of me thought this was crazy, me going to the congregation expecting them to put money in a pot for me to play with but they were really marvellous,” she added.

“They made a great act of faith in me and Clann Credo followed thereafter. I felt what I was trying to do was to put in place something that would be for the good of society, a way of helping people and over the past 20-plus years, what it has achieved has exceeded expectations beyond my wildest dreams.”

Said Clann Credo Chairperson Colin McCrea: “Without the vision and determination of Sr Magdalen social finance simply would not have become the success it is today. Her determination as founder and as a Board member over all these years ensured that Clann Credo established a very strong basis in supporting community development.”

In 2010, Sr Magdalen addressed the United Nations Civil Society in New York to speak about her pioneering social funding efforts. Seven years later, an OECD report recommended that the Clann Credo social enterprise model be replicated in other countries.

When explaining the origins of Clann Credo, Sr Magdalen cited the poverty she witnessed growing up in Waterford, the ethos of the Quakers who founded industrial Portlaw and the teachings of Presentation Sisters founder Nano Nagle. 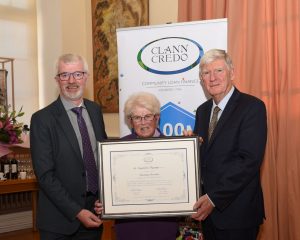 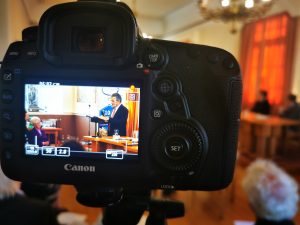 In focus: Sr Magdalen listens to the warm salute offered in her honour by former Clann Credo Chair, Tom Finlay at Kilkenny Town Hall on September 27.