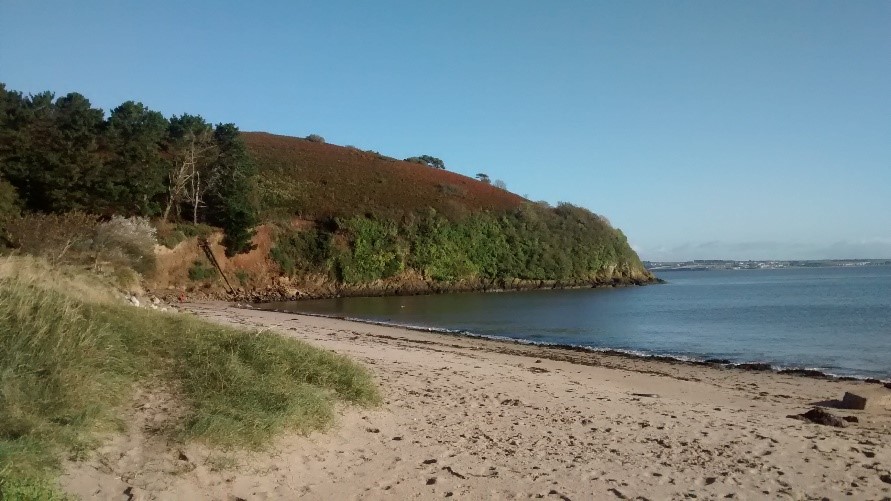 9km of country lane, ancient track, country road and beach are embraced in this splendid walk full of unanswered questions and colourful speculation. The walk can be shortened into three circuits – A, B, C. As there is considerable road walking, please wear a high viz vest.

Start at the main Woodstown carpark. Go south uphill along a surfaced, lightly-travelled road offering tempting glimpses of the strand and Waterford Estuary. A brook rippling down from the gentle slopes of Knockavelish hill adds mood music to the walk. 19th century Mount Alto, a classically-proportioned Italianate villa is to the right, set back in its beautiful mixed woodland. (Check out www.mountalto.com).

The high hedgerows further along the road provide welcome protection on a breezy day and offer a rich range of flora, including snowberry and in winter the vanilla-scented winter heliotrope. Shortly after the road begins to descend there is a sharp turn to the left, leading to a lovely boreen with splendid views of Waterford Harbour drawing you on. Be careful as the boreen turns into a grassy track leading to Fornaght Beach.

A third of the way across the beach take the sandy exit by some white stones and turning right at the T-junction follow the lane as it gently rises to a staggered crossroads. Here, for the shorter A circuit go right and follow the lane back to the car park, retracing your steps from the switchback junction. For the longer circuits bear left at the staggered crossroads and then an immediate right brings you to an S-bend where a rough track to the left of two white gateposts takes you uphill and over the flank of Knockavelish eventually to the main Dunmore Woodstown road in Ballyglan. En route near the top of the climb look back over the coast and around – splendid views. For circuit B turn right at the junction and follow the paved road right down to the car park. This can be a busy road so be careful to position yourself on the right offering the best visibility to cars.

For the longest circuit C go straight across the road and follow the track uphill. You are now truly on the Bóithrín of which more later. Near the top and to the right in behind the communication towers are the remnants of a passage grave dating back four thousand years – locally known as the Giant’s Grave. Continue along the lane to the Faloun road where a right turn will bring you downhill to a turnoff to the right towards Maguire’s Garden Centre. For those wishing to extend the pleasure of the walk there is a café in the garden centre. But to complete the walk continue on straight ignoring the turn off to the left at the café (This would bring you to the main Waterford-Woodstown road and a route already described in the Rossduff Loop). This pleasant road eventually joins up with the main Woodstown road and at that point you are only 800 metres from Woodstown Strand, which offers a relaxing or invigorating walk back to your start point.

Caution: After a period of heavy rain best to avoid Circuit C as the Bóithrín at the end near its junction with Faloun Hill can be flooded and a detour through the fields would be necessary. So best avoided unless you are in suitable waterproof footwear.

Start/Finish: Woodstown Car Park. Distance: Circuit C is 9 kms, B is approx. 6 kms and A is approx. 4 kms. Time: 1-3 hours depending on circuit. Suitability: Easy but moderate for hills.

Bóithrín na mBan gorm. This enigmatic name translates literally as Boreen of the Blue Women. However, the adjective gorm in Irish when applied, as in this case, to humans means black, which gives us the usual interpretation of the term, Boreen of the Black Women. And to continue with the puzzle – is it mBan or Mná, the form being the plural. If we were to know for sure it could cast light on its story. Women as opposed to woman might strengthen the slave route theory. Unlikely though that it went all the way to Cork as claimed by some. Smuggling? Makes sense in avoiding customs checks. A seasonal route to the shore by Mesolithic people? Why not, given the rich shellfish harvest possible. Its link to the Forty Steps, steps cut into the cliff face at Creadan Head? A ritual route from the nearby passage grave? So many possibilities including it being an old route to the seashore. Folklore and local legend are discarded at risk of losing a rich vein of explanations, so we pass on to the reader the unanswered question – how did it come to be named Bóithrín na mBan gorm? Whatever the answer the Bóithrín remains a splendid walk to be enjoyed for as long as the question remains and then some.

Ballyglan (Baile an Ghleanna), Knockavelish (Myles’s Hill), Harristown, are the townlands of this walk. Harristown would seem to be younger than the others but it is found as early as 1654 in the Civil Survey. Canon Power translates Harristown as Baile Anraí – Harry’s Homestead but interestingly offers an alternative name, Barr an Bhotháin (Summit of the Hut).

The Fairy Bush, a reference point on the walk, lies on the boundary of Harristown and Leperstown, was named for a thorn tree but its Irish name, Crosaire Leacht Scheiche an Bhóthair, Crossroads of the Slab (monument) of the Monument Bush of the Road, suggests a more layered origin. Canon Power tells us that stones from an ancient stone circle were still in evidence in the early 19th century.

Snowberry (Symphoricarpus albus and in Irish Póirín sneachta). The hedgerows along our route especially on the flanks of Knockavelish are speckled white in autumn with the white berries of Snowberry (photo) The names, botanical and Irish are in themselves revealing – the Latin coming from the Greek symphori meaning ‘bearing together’ suggesting the harmony so often found in nature and the Irish reinforcing this when found in the saying Cuir póiríni is gheobhair póiríní – poor seed will give you a poor crop. The white berries, poisonous to humans, are food for pheasant, grouse, quail, robin and thrush and its pink flowers early in the year are attractive to pollinating bees. From Alaska to Oregon, its home, it was used in frontier life as a shampoo, and applied in a poultice to warts and rashes. Being an alien plant we need to be mindful to its invasive potential as it can be rampant.