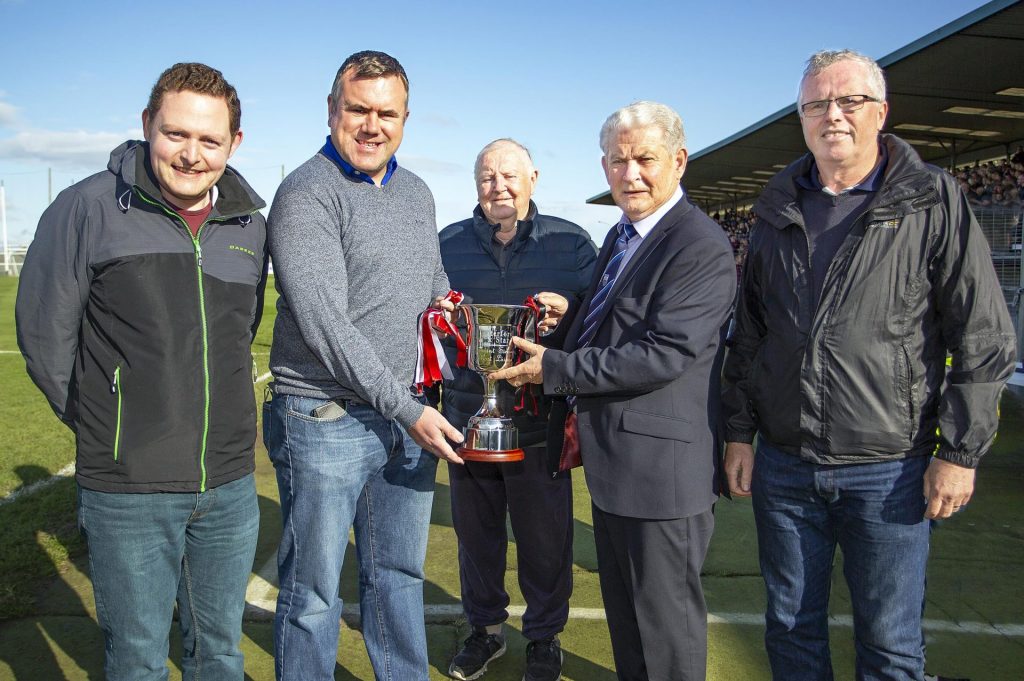 A nine point winning margin for Ballygunner should lead you to believe that this was a poor and one-sided JJ Kavanagh & Sons County Senior Hurling Championship final but in truth that was not the case at all.
Champions, Ballygunner, got off to a flying start and when they led by 1-7 to 0-1 after 14 minutes a rout looked on the cards.
But credit to De La Salle as they never threw in the towel and a spirited comeback saw them get to within two points (1-15 to 1-13) in the 14th minute of the second-half and now we really had a cracking game on our hands and thoughts of an end to Ballygunner’s nearly four and half year unbeaten run in the Waterford SHC loomed large on the horizon.

CHAMPIONS TO THE CORE
It’s often said that real champions stand up to the plate most when they are challenged and this was very much the case in this game. As De La Salle got within two points, Ballygunner upped the ante by rattling off an incredible eight points without reply (including five inside two minutes) and in the blink of an eye this game was decided and the Gunners were on their way to a sixth News & Star Cup on the trot.
People may bemoan the fact that Ballygunner have won six titles in a row and next weekend they go in search of minor and intermediate county titles to go with the host of underage titles that they have won this year and say that this sort of domination is not good for Waterford hurling but while those people might be correct, from my viewpoint (with no connection whatsoever to Ballygunner) you just have to admire the club and this team for what they are doing.

AN EXCELLENT TEAM
This is an excellent team. Simple as that. They haven’t won six county titles and aren’t reigning Munster Champions for nothing. They are a serious outfit and every year they seem to change it up and still their domination go on. The O’Sullivans (Brian and David), Harley Barnes, Wayne and Dessie Hutchinson, Shane Walsh, Conor Power and others who were key to this team in recent years were all absent from the starting 15 on Sunday but it mattered little.
Like all great champions, they never panic, they trust what they do and just keep to the plan but above all they have brilliant hurlers all over the team and the panel and they play great hurling. Credit where it’s due.
For the record, here’s the Ballygunner team that lined out in the first of this six Co. Final wins on the bounce when they defeated Mount Sion 2-16 to 0-9 in 2014: BALLYGUNNER: S. O’Keeffe, A. Kirwan, B. Coughlan, Stephen O’Keeffe, Philip Mahony (joint captain), W. Hutchinson, S. Walsh, H. Barnes (joint captain), Barry O’Sullivan, D. O’Sullivan, Brian O’Sullivan, JJ Hutchinson, C. Power. Subs: P. Hogan for C. Power, 38; C. Sheahan for Barry O’Sullivan (blood 48-53); C. Sheahan for David O’Sullivan, 53; S. Power for Barry O’Sullivan, 56; R. Cunningham for A. Kirwan, 58; G. Molloy for H. Barnes, 59.
Just four of that team started Sunday’s final…..

SCORE OF THE GAME
There were plenty to choose from but one from each side really stood out for me. On the De La Salle side, Eddie Meaney had a great game and he propelled his side back into this game in the first-half with a goal and a couple of great points. One of those white flags was a really beauty. He rose highest to catch a brilliant ball out of the air before turning and lashing the ball between the posts, over his shoulder, from fifty odd yards.
On the Ballygunner side of things, Paddy Leavy got an absolute cracker of a point midway through the second-half from inside the corner from a very difficult angle after a brilliant move of five or six passes from their own half, pressed all the time by DLS. They just don’t panic on the ball.

TURNING POINT
That’s an easy one. With just over 16 minutes remaining De La Salle had cut Ballygunner’s lead to just two points and it looked like we were in for a grandstand finish. But two unbelievable minutes from the champions, changed all that. Inside two minutes the Gunners fired over five points to go seven clear. They added three more to make it eight points on the trot. From two up to ten up inside ten minutes. Game, set and match and six in a row in the bag.

ENTERTAINMENT VALUE
As I said earlier, a nine point winning margin would lead you to believe that this was a poor and one sided game but that wasn’t the case. Ballygunner got a brilliant start and looked likely to cruise to another easy county final win but De La Salle, to their credit, dug in and made the champions go up through the gears to claim their sixth County title in a row. The Gunner’s five points inside two second-half minutes, a scoring burst that decided this game, was worth the admission fee alone.

MAN OF THE MATCH
Probably the most talked about man in this year’s County Senior Championship has been Dessie Hutchinson and therefore it was fitting that he should end a brilliant season as the County Final Man of the Match. Coming into this game, Hutchinson had notched up 2-14 (all from play) for the championship to-date and he added a further 1-3 from play to cap a memorable season for the Gunners’ full-forward. Of course what makes all this even more remarkable is that this is his first season playing in the county senior championship after not hurling at all for six seasons while he was a professional footballer with Brighton & Hove Albion and Waterford FC. To look at him hurling you’d think he never missed a week’s hurling, never mind six years. Surely a certainty to be invited into Liam Cahill’s Waterford senior hurling panel for 2020. A lovely family moment for the Hutchinsons as all three brothers (with Wayne and JJ) finished the game on the field of play.

WHAT’S NEXT?
Ballygunner begin the defence of their Munster Club Championship title next with a trip to Clare to take on newly crowned Banner champions, Sixmilebridge, trained by Davy Fitzgerald on the first Sunday in November. The prize for the winners is a meeting in the semi-finals with Limerick champions Patrickswell. For De La Salle it’s a winter for what might have beens and the hope that 2020 will be the year that they win their first Co. SHC title since 2012.

NEW CUP
On Sunday, see picture, we presented Paddy Joe Ryan and the Waterford county board with a brand new Waterford News & Star Cup. We are delighted that our newspaper continues to be associated with this great championship and we look forward to this cup being presented to successful captains for many years to come. A big thanks to Sheridan Trophies for sourcing the new cup.