PHOENIX: Swimming against the tide 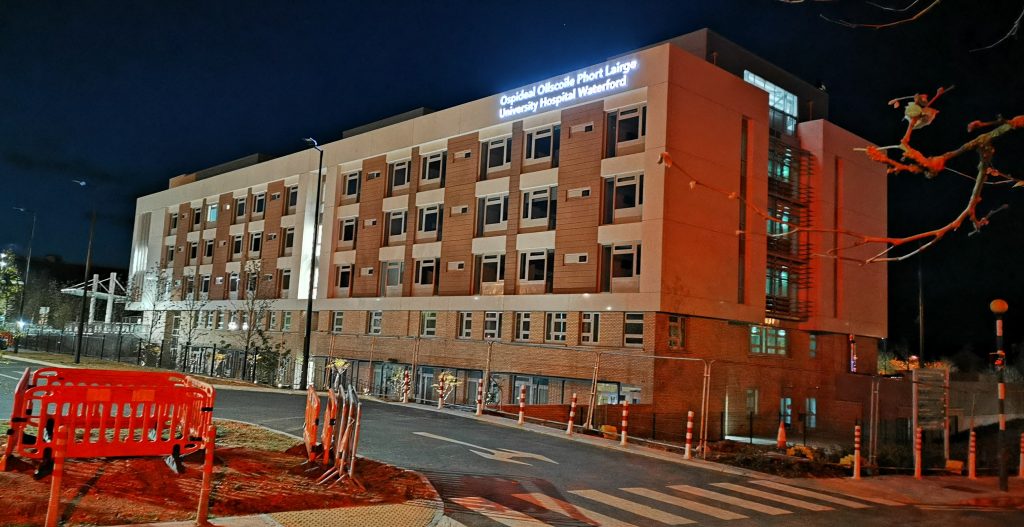 The Dunmore Wing at UHW: ‘Waterford is to get a new ward block which is already built?’

THE last week brought home with a bang the seriousness of the assault on the status of Waterford city. Despite all the polite verbiage and all the nods and promises the truth is in the old adage, “don’t tell me, show me”! Anyone who wants to can see the reality of this Fine Gael government’s view on the status of Waterford city. You can go on line and look up https://www.per.gov.ie›capital-projects-tracker

It tells you all you need to know about the 144 capital projects to be funded by government under the National Plan Ireland 2040 in the period to 2027 to the value of €20,794,000,000. That is twenty one billion Euro. The only four projects for the South East have a combined value of €92 million. A water scheme in Kilkenny €21m, a flood relief in Enniscorthy €37m, an MRI in Kilkenny €3m and a new ward block in UHW €31m. The ward block is the new Dunmore wing.

It is not necessary to go through all the figures except to say that billions are to be spent in Cork, Limerick and Galway on all manner of medical, educational and infrastructural projects. The difference is stark, with over €2 billion going to Cork alone. Projects in Sligo General Hospital amount to €107 million in total, which is more than the money committed to all projects over the plan period, in Waterford and the South East. No one begrudges Sligo anything, but this is patently ridiculous. It speaks volumes for Mr Varadkar’s love for Waterford, the place he will not overlook or will not forget!

‘Waterford MASP must be extended, especially as its Strategic Plan forms the basis for City and County Development Plans. Waterford City is being used as a test bed for some very dangerous regional policy.’

Waterford is to get a new ward block which is already built? That’s it? The capital tracker data dates from late 2018. Obviously, neither the proposed new mortuary nor the proposed second cath lab were included in Government plans at that time and so do not appear on the list.

A man in his mid-fifties was rushed to Cork at 6.30pm on Friday last having suffered a major heart attack. He was resuscitated on the way to Cork by paramedics and returned to UHW to be stabilised by Emergency Department staff. CUH confirmed this saved his life. He was once again rushed to CUH as the UHW cath lab was closed for the weekend. He made a great recovery, and is now recovering in CUH. In all the billions spent on the HSE you wonder does anyone, front line staff excepted, really care about what’s going on?

This is the third serious UHW cardiology case in as many weeks. Odds are shortening on a terrible death, but even where a man was sent home and then died from a heart attack, the response is zero. The system does not empathise. The figures on trolleys are endless, waiting lists are off the scale, staff shortages are incredible and yet the Taoiseach and Minister for Health boast that the new HSE regime has brought costs under control.

No one has tackled the massive over spend on the National Children’s Hospital or the toxic overmanning at CUH. We must jump for joy because €4.8m will be provided to open our new UHW palliative care unit. Even then, uncertainty lingers over delays with staff recruitment in a facility to which €6m in local subscriptions is committed. One wonders the extent of local funding for hospice units in other areas by comparison?

The HSE promise many new goodies for UHW, a Centre of Excellence for Orthopaedics, new Ophthalmology Unit and investment in the Regional Cancer unit, but where is the funding for them between now and 2027? The Capital Tracker is dumb on that point!

It is also dumb on investment in WIT and apparently the proposed new engineering building, which has recently gone for planning, may not be funded or delivered until after 2023. Four years from now. It must be a record for a third level institution not to have any new teaching space in nearly 20 years.

John Halligan appealed for constructive criticism of his role in government when interviewed recently by Dermot Keyes. Mr Halligan will run again for election. Waterford’s electorate will adjudicate. Many are unhappy with Mr Halligan’s performance and his recent comments that “Fine Gael has been good to him”!

Even the most cynical probably believes that our elected representatives have the good of Waterford at heart, the caveat being that people are very upset by their political inability to deliver on the endless promises of jam tomorrow, particularly in UHW acute medical services, which have been such a negative feature of present and recent FG governments.

It is extremely difficult to understand how Mr Halligan can blithely say, once the second cath lab goes for planning, that “it’s happening, it’s out of our hands. The HSE will give us monthly updates as to where it’s going”.

He should reflect on his announcement of September 2018, saying that the project would be delivered within 12/16 months. 13 months later we await a planning application without any clear delivery timeline. Is it any wonder people are sceptical?

Experience with the proposed new mortuary, showed it listed by HSE as a risk in 2002, a priority development in 2012, on the HSE Capital Plan in 2014, receiving planning in 2015, but still not started. It is certain that it would still be on the “priority” list without Darren Skelton’s story which led the Taoiseach to blunder all over it until he realised he was badly briefed and announced that the project would proceed immediately. It took the disclosure of corpses rotting on the mortuary floor to move the project.

Maybe people being sent home from UHW to die from heart attack will eventually move the expansion of cardiology here? If, as Mr Halligan says, we analyse the depth to which Oireachtas members have gone to get these projects over the line, most people come up with the clearly obvious answer. A blatant lack of political power!

The adoption of a Regional Strategic Economic Plan by the Southern Assembly is mired in controversy. It transpires that the Waterford City area for strategic purposes (MASP) does not include the city’s dormitory suburb of Tramore, 45.7% of whose workers work in the city. By comparison, the Limerick and Cork MASP (Midleton has 34%!) areas are multiple times the size of the Waterford one. Much more so than population difference would justify.

Councillors who voted on our MASP for the Regional Assembly say it could not be increased as it was made in the Dept. of Local Government.  Is the Dept. artificially suppressing the scale of Waterford city for political purposes? This follows on their failure to implement a Boundary Commission extension and must be remedied.

The fallout from the adoption of this Strategic Plan may be grim. Criticism was addressed by council CEO Michael Walsh, but he is constrained in his public statements. Interestingly, the council is now making a revised submission to the assembly. If the current plan is adopted, Waterford’s position as the key regional driver (Ireland 2014 NPF Framework) of the South East will be undermined. Are we being tumbled down into the county town league, while Cork and Limerick plough ahead?

Is this to engineer a situation where urban areas across the South East are the same, with eventually, no city in the region?

Tramore elects councillors to the city Metropolitan District Council, but government excludes Tramore from our MASP. Who benefits? Is the corollary that no place across the South East will have precedence when regional development is proposed? The fall out for educational and medical investment by the state is obvious, as is the negative impact on the creation of a region to compete with Limerick and Galway.

One does not have to look very far to see the proposed development of the TUSE, including WIT and Carlow IT or future investment in UHW, to know where this could go. This is a dangerous strike against Waterford. It is risible in terms of regional policy, and follows on the Garda HQ debacle where the regional assistant commissioner is stupidly based in Kilkenny, a town with no Divisional HQ.

The MASP controversy has erupted because it follows a growing awareness in recent years that Fine Gael politics is utterly inimical to Waterford as the regional centre for the South East. Waterford MASP must be extended, especially as its Strategic Plan forms the basis for City and County Development Plans. Waterford City is being used as a test bed for some very dangerous regional policy.

The former Waterford Crystal offices and showrooms on the Cork Road, which have been the subject of vandalism and negative comment in recent times, are to be totally refurbished for IT business. .  Its closeness to WIT’s main campus is a major plus as there must be real opportunity for mutual development. The huge empty site nearby could also facilitate joint development such as student housing. The work, if done quickly, will undoubtedly rejuvenate the entire Kilbarry Cross area.

Noel Frisby’s Ibrook Ltd has received planning permission to carry out the work.

The three-storey office block will be re-clad, re-glazed and extended by 920 square metres to house 700 staff, with a food court and retail unit in a section of the former showrooms. The plant ceased operating in January of 2009 and the 36-acre site was bought by Noel Frisby in 2013 and €500,000 was spent getting the site ready for redevelopment. This is a large speculative office development which is unusual for Waterford. State job creation bodies must do their job to attract new FinTech and IT companies into the area to balance the local economy

It’s a simple proposition for Waterford city. Unless business people who live, made money and want to make a success of where we live are prepared to invest in the future of this city, then we can forget it. The Frisby initiative is the first such in many years. Everyone here hopes it will be a huge success for that family and this city.