TIME OUT WITH TIMMY: Where are we going? 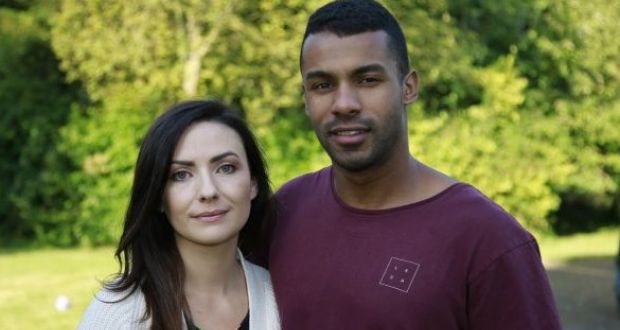 ‘Disgusting’ is a word I can readily use to describe the treatment of Co Meath couple Fiona Ryan and her fiancée Jonathan Mathis, pictured, who have received vile abuse for just appearing on a TV advert.

ARE we all just losing the run of ourselves a little bit lately? Seriously, I can scarcely recall a time since I’ve been on this planet that we are more unbalanced and off centre when it comes to pretty much everything. I have no intention of trying to cure the world’s ills here but I simply feel like pointing out as clearly and calmly as I possibly can that we should all take a chill pill and stop being so bloody obtuse.

I sincerely couldn’t give several hoots whether you agree with me on anything in particular, but I reserve the right to at least express an opinion, however unimportant or irrelevant it might be. The sad thing is, and I get the feeling I’m not alone on this, we have become a severely entrenched bunch on this island and I don’t believe we were always like this.

I fully support anyone’s right to protest, to disagree and to challenge the views of individuals, organisations or the powers that be. It is the essence of democracy and free speech. However, these rights do not extend to exercising racism, intolerance or downright ignorance. And the rest of us have to stand against this creep. It seems to be rearing its ugly head time and time again and it is not getting any better; quite the opposite in fact.

‘Looking back now I’m just so appreciative that my ordinary Irish parents never batted an eyelid about his colour. It made no difference. Just like me they liked him because he was just a lovely guy.’

‘Disgusting’ is a word I can readily use to describe the treatment of a young couple who have received vile abuse for just appearing on a TV advert. Mixed-race Co Meath couple Fiona Ryan and her fiancée Jonathan Mathis, have reportedly had to leave Ireland following online attacks including apparently a death threat simply because of the colour of his skin. It was of course cloaked in some sort of ridiculous “support your own” Irish shops rhetoric, but the veil was thin. It was born out of racism and xenophobia and it’s pathetic. Let’s call it what it is. They are a lovely looking, happy couple. Nothing is more sickening to a begrudger who hides behind his or her keyboard, blaming every one else for what they have or haven’t got.

I should point out that all of this came from people living in a supposedly Christian country that I’m generally proud to call my homeland. I stated that I don’t think we were always this way inclined. Yes there was a time before we had such varied nationalities represented here in Ireland but I can go all the way to the seventies and recall when my brother-in-law first visited Dungarvan. Now happily married to my eldest sister for many years, he is originally from India, and they met in the UK.

I remember him coming to our house back in 1978 and apart from the obvious amusement any kid would have meeting their sister’s boyfriend, the fact that he was dark skinned never actually made a jot of a difference. Looking back now I’m just so appreciative that my ordinary Irish parents never batted an eyelid about his colour. It made no difference. Just like me they liked him because he was just a lovely guy. He still is and he’s been a regular visitor to Dungarvan since then.

I can honestly say that he has only ever been treated with respect and made feel very welcome in Dungarvan, something I feel quite proud of considering it’s my hometown. He’s always happy to pop down and have a chat with the butcher before making the most fantastic curry I have ever had the pleasure to experience. You haven’t lived till you’ve eaten one of Asim’s dinners. Divine. Indian restaurants are grand but trust me, this is cuisine on a different level. Now that he’s retired from his practice he has even more time to visit and knock out some great meals.

While Asim’s experience of Ireland has been a positive one, I have often wondered if the same can be said of other recent arrivals in Ireland? Have they been afforded the same hospitality? Perhaps visiting here and living here may be two very different realities.

Clearly though, we as a nation have not yet learned anything from the supposedly informative religions we purport to espouse on this island. I’m not a Catholic so I have to wonder what exactly is being preached on Sundays from pulpits these days?

Is anyone actually calling out this hatred we’ve seen recently for what it is? If we have so many good and decent people attending whatever nominations weekly, how does racism seem to be so prevalent. Thriving even some might say.

In English football currently, we are hearing a lot about the ugly chants being levelled at black players. I thought in the main that the nastiness infecting the beautiful game had fizzled out years ago with the demise of hooliganism. Seemingly not I’m afraid to say. How does this get dealt with then in a so-called civilised society? Groups and crowds don’t change overnight but individuals can and will make a difference. It’s not acceptable to sit in front of a computer and click like for abusive comments. It’s totally wrong to add comments that express hatred or hurt on a social media forum just because you’re “offended”. We are all either part of the solution or part of the problem, whether we like it or not.

It would be nice to see that couple return to Ireland. I sincerely hope that they do but that is for them to decide. I still believe the majority of my countrymen and women are good people who would not condone this kind of abuse or the judging someone purely based on the colour of their skin! My concern though is that there’s an alarming rise in attitudes to the contrary. I would dearly love to be proven wrong.

If you are in the “undecided” camp when it comes to how you feel about people of other races, I would simply ask that you think about it. None of us can choose our place of birth, our race or our skin colour, so judging someone solely on it, by it or for it is stupidity in the extreme.