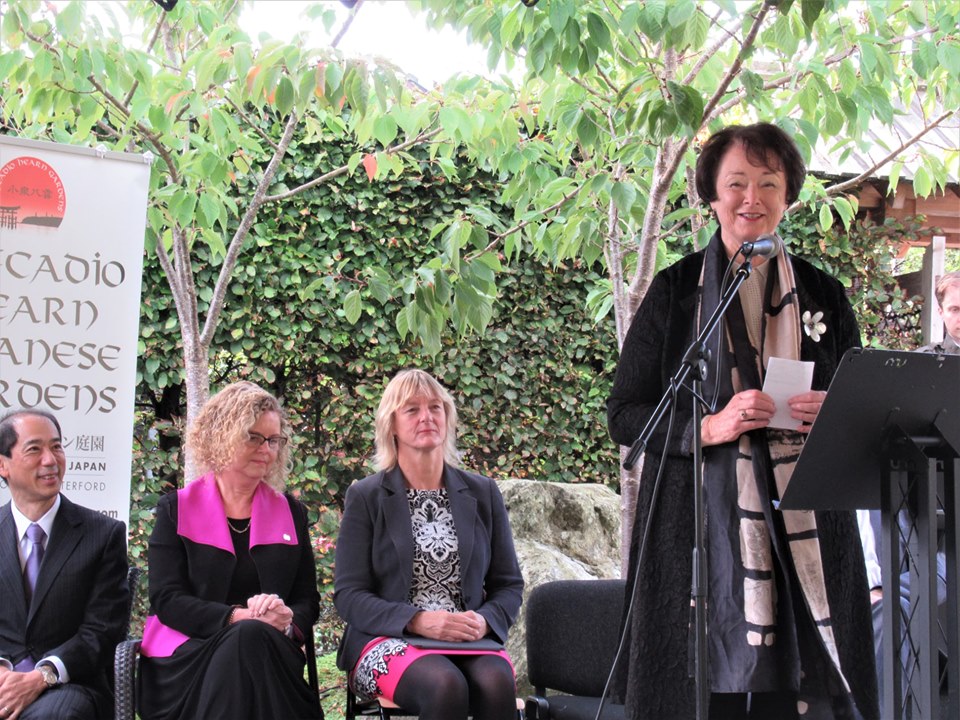 FÁILTE Ireland have provided funding of €73,000 for a new visitor experience at Lafcadio Hearn Japanese Gardens. The money has been used to build a state-of-the-art Japanese Tea-Room, which is now officially open. Additionally a new audiovisual experience, offering the story of the gardens in a choice of languages has been launched. According to Mary Houlihan, Manager for Ireland’s Ancient East, the motivation behind this funding was the “opportunities it affords to the international market and the interest it holds for the international visitor”.

Comparing the attraction to the Japanese Gardens in Co. Kildare, Mary Houlihan said that “although there are, of course, similarities between both attractions, the Lafcadio Hearn Gardens offers a unique experience to the visitor. Lafcadio Hearn is such a household name in Japan and it is extremely prestigious for the Ancient East to be able to offer an attraction like this, in a town he held in such high regard from childhood”. The Ancient East, and indeed Waterford have received funding on a much lower scale than some of the attractions on the Wild Atlantic Way and indeed, across Ireland, so it is to be hoped that this funding, and funding recently awarded to Lismore, is the start of tourism redevelopment and rejuvenation here in the South East.

Mary Houlihan firmly believes that the co-operation between Fáilte Ireland and Tourism Ireland means that businesses will reap the benefits of the efforts to reach the international market with new and improved visitor attractions, with the aim of developing Waterford enough to encourage people to not just visit here, but stay here for the duration of the trip. She issued a reminder that Fáilte Ireland are always looking for proposals for new tourist centres and, specifically, tourist experiences. “Statistics have proven,” she said “that visitors to the Irish market are visiting gardens so it makes sense that this is where we fund projects.”

Chef Neven Maguire was among the first to view the new facilities as he filmed for his new show on site. The new Lafcadio Hearn Japanese Gardens were officially opened on Friday by Deputy John Halligan, MEP Grace O’Sullivan, Mayor Pratt, Ambassador Kitano of Japan, and members of Fáilte Ireland.

Development to proceed despite claims of ‘horsing people’ into apartments