Focus on Fostering: “The kids must come first.”

‘If you don’t love the kids, they see the lie’

KAREN and Mick Power clearly make for a good pair. While sitting in their Norwood home for an hour on Monday morning, they frequently make different points to this newspaper simultaneously while somehow not really talking over each other. It’s quite the insightful dynamic.

Over tea, the Powers, joined by their Tusla support worker Dorien Groot (who is based in Portlaw’s Clodiagh House) explained with palpable care and integrity about what drew them into fostering in early 2014. But their commitment to care was made manifest long before the first child they fostered crossed their welcoming threshold.

“Fostering was something we’d always talked about,” said Mick. “Then Karen’s mother (Josie) had a stroke, developed dementia and she lived with us for about 15 years so that put pay to the fostering idea during those years.”

Karen, who worked in Bausch + Lomb for 20 years, interjects. “A good few friends of mine had been fostering while Mam was here; I got a sense of what they were facing into long before we got into fostering ourselves. You’d hear about the highs and the lows of it. But I handed in my notice to care for Mam and she died a few years after I’d given up the job. And for a year the two of us wondered what we’d do next, to be honest.”

Said Mick: “There was a hole in our lives, really, after Josie went. The house felt different. Empty.” Karen added: “There was always something: appointments, nurses calling and all that went with looking after someone who needed that level of care, but while Mam was alive, we couldn’t have been fostering. But after she died and when Mick was left go from his job (having worked in carpets), we ended up having a full year out and towards the end of it, I thought I was going to crack up. We’ve one son ourselves, Jason – he’s 29 now – but we were used to having a house full of kids what with all his friends coming in and out when they were young.

“Sometimes you can be too busy, you need some time out for yourself as well, but now, as foster parents, the house is back to how it was 20 years ago. All go. And when we need it, thanks to Tusla and my friends when we need them, we’ve got great support. You’re never on your own when you’re fostering, and it’s important that people realise that.”

The Powers are among the 318 carers in Waterford and Wexford who have opened their doors to 358 children.

Tusla Waterford, which held two public information sessions it will hold in the Woodlands Hotel today (Thursday), October 17 , hopes these sessions might persuade more aspirant carers to answer its call.

According to Vincent Daly, Tusla’s local Area Manager: “When a child cannot remain in their family home, our foster carers, who come from a diverse range of backgrounds, including same sex couples, single people and people from different ethnic backgrounds, provide a caring environment for children. These carers encourage them to participate in their communities through schools, sports clubs and other activities. When families need additional support, respite foster care can help to maintain a child at home.

“In Waterford, we are looking for people from all backgrounds, aged over 25 years who are interested in working with us to provide foster care and respite care for children up to 18 years of age.”

The application of common sense when fostering cannot be underestimated, said Mick. “I’d one question in my head from day one: what would you do for your own child? Alright, some of the children are going to have different needs but it’s basically the same thing to me. If you give a child a home with all that entails, the difference you see in the kids, and for some it comes more quickly than others, but the difference in them is unreal.”

Nine home interviews and an intensive three-day training programme with Tusla at Clodiagh House provides an almost year-long pre-fostering schedule which proves too rigorous for some. But once Mick and Karen were in the thick of that process, they did not waver.

“At the time, there were just three people (in Tusla) looking after all of that,” said Mick. “There’s a lot more numbers now doing that work but it was all very thorough. It has to be.”

Karen continued: “There’s bound to be a lot of questions put to you. You’re putting yourself forward to bring a child – or more than one child – into your home. You’re asked questions separately and if you’ve a child yourselves, he or she will be asked about it, then you’re interviewed together and you’re asked questions they’ve asked you separately. You don’t tell one lie doing it. There’s no point going down that road if you’re serious about getting into fostering.”

Mick added: “The thoroughness of it makes you think about and look at yourself. It really opens up the book.”

On that note, Dorien Groot tells me: “You’re asked about your prior relationship history too. It’s very personal in that respect. But that’s the nature of the process. It demands thoroughness.”

In the past five years, Karen and Mick have had several children in their care, and they’ve encountered most of the emotional spectrum as demonstrated by toddlers, early school goers or teenagers.

“There’s no point saying you won’t get attached,” said Karen. “Sure you have a child here under your roof and all you want to do is your best for them.”

Mick interjects, saying: “And if you don’t love them, they’ll see the lie. You just have to commit to them.”

Karen, referring to foster children’s birth parents, tells me: “If you can get on with them, it’s the best thing for the child. You can’t look down your nose to their mother or father. You can’t afford that kind of approach.”

Dorien agrees, stating: “I think that’s why it’s been so successful for you. You’ve made this your life now and you look after the kids in your care like they’re your own. You’ve incorporated them into your family and what works for you.”

Said Mick: “Look, there’s times when you’re shaking hands with someone and it’s not the easiest thing in the world to do. In fact it’s the last thing you want to do. But you can’t make fostering about you. The child is what matters. Kids first, everything else, second. That’s the way it has to be. Otherwise, you’re at nothing in the long run.”

Karen nods, adding: “You have to remember that that’s the child’s mother and father sitting across from you even if they’re not great, sure they might only be alright but you’re not the child’s parent, no matter how much you want to be. It can be hard at times but you can’t lose sight of that.”

Karen and Mick’s commitment to fostering is absolute. The additional layers of care that children with a range of needs require is a further commitment on top of their primary fostering role. They’re certainly not seeking a pat on the back for the path they’ve taken, but it’s clear that they’re content with the direction life has taken them in, challenges and all.

What’s the most important characteristic an aspirant foster parent should cling to? “Make sure you have all your own ducks in a row,” said Mick. “Know who you are. And if you want to do it, do it for the right reasons.”

According to Karen: “And never think you can do it all on your own, because there’s help there. There’s always help.”

While sitting in the Powers’ kitchen, the text of a framed picture caught my eye. It reads: “Being part of this family means you are loved and always will be for the rest of your life no matter what.” An hour in Karen and Mick’s company showed how well they’re living up to that particular adage. 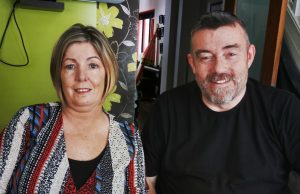 Karen and Mick Power, who live in Norwood, have been foster parents since 2014.