Locals’ show of support for The Haven 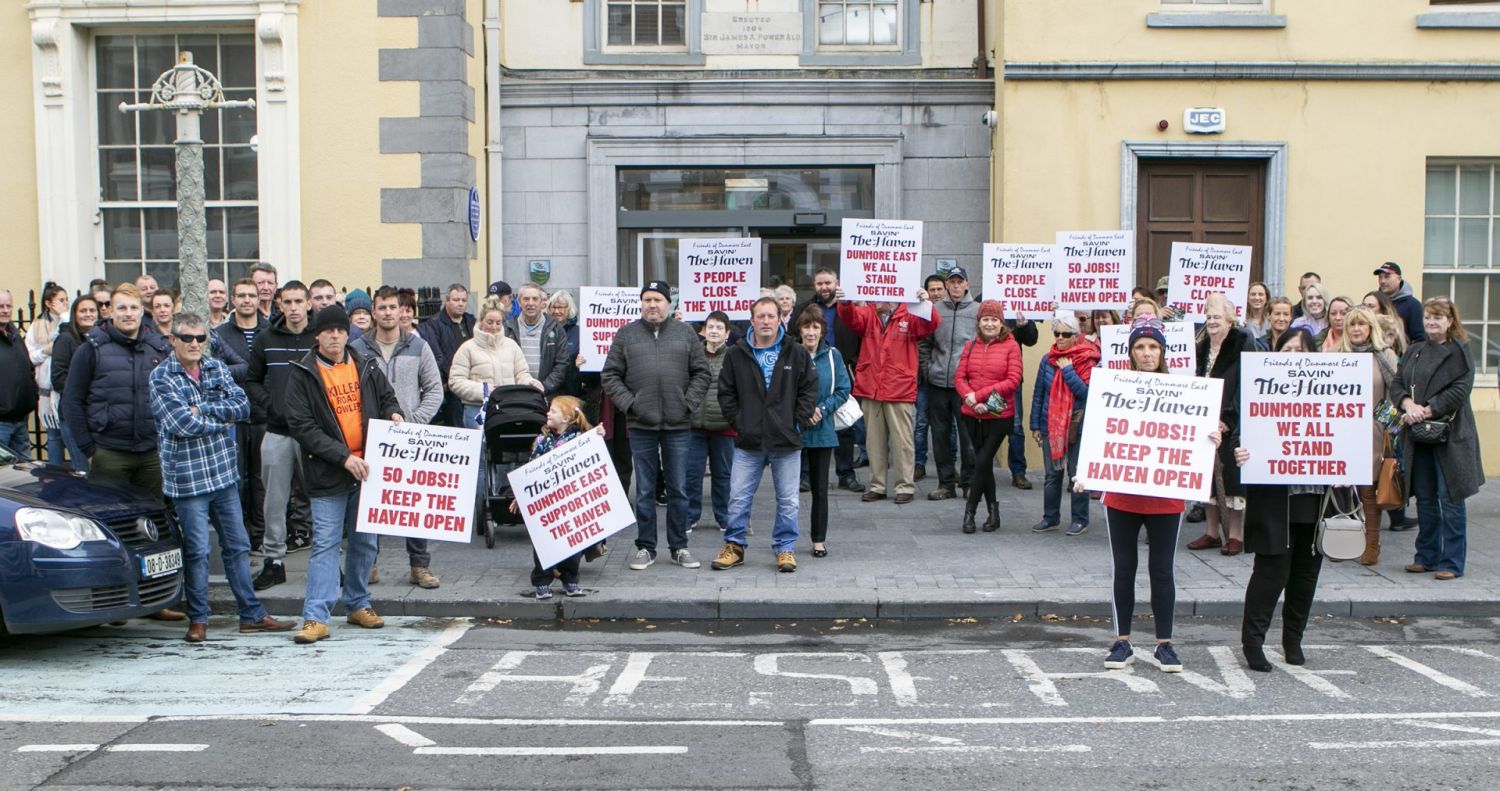 The Friends of Dunmore East who held a peaceful protest outside City Hall last week.

A GROUP of approximately 50-70 people – calling themselves “Friends of Dunmore East” – held a peaceful protest outside City Hall last Thursday afternoon against the Council’s decision to refuse permission to the Haven Hotel’s retention of a marquee outside their hotel. Holding placards with “Save 50 Jobs – Keep the Haven open”, the protestors were passionate in their support of the hotel and the Kelly family who operate it.

“The Haven Hotel’s tourist business, and in particular its large wedding business, is a huge economic driver for the rest of Dunmore East,” said Michael Power, a butcher from the village. “We’re here today to show the Council that we don’t want to be pushed around. The Haven and the Kelly family should be allowed to continue to do business as they have been doing. The Haven closing would lead to a huge loss of earnings, not only for my own business but also for the pubs, restaurants, shops and B&B’s in the area.”

Well known fisherman and amateur archaeologist Noel McDonagh said that the Haven brings “about €6 million to the area every year”.

“That’s a hell of a lot of money to distribute to the area, not to mention the 50 jobs it provides in the hotel alone,” Noel said. “That marquee is keeping the beautiful Haven Hotel open all year round. Without it, the hotel will close and will probably close a lot of other businesses in the process.”

Barbara Hutchinson has a B&B in Dunmore East and told the Waterford News & Star that when the Haven suffered fire damage and was forced to close in 2015 the village “suffered deeply”.

“Bed and Breakfasts took a big hit that year with hardly anyone coming into the village,” Barbara said. “In fact, there were about 11 B&B’s in Dunmore at the time and now there’s about four. The rest went out of business because there just wasn’t enough people coming to the village. Since the Haven started doing weddings it’s made a great difference to everyone. We’re getting a spin off from the weddings, as are the shops, restaurants, pubs etc. My own daughter had her wedding in the Haven and a load of people came over to the village from Abu Dhabi.”

Asked to deliver one message to the Council, Barbara said, “Let the marquee stay up so the people of Dunmore East can stay in business.”

Sinn Fein Councillor Jim Griffin who joined the group for their peaceful protest said that it was “great to see the show of support from the Dunmore East locals for the Kelly Family.”

“The purpose of this show of support was to highlight the importance of a business that is having a huge economic benefit to the entire area,” Cllr Griffin said. “Whilst acknowledging that planning should have been sought, the family are engaging with the local authority to try get a temporary stay for the marquee until appropriate funding is financed through their business model i.e. weddings and functions to 2022/23 when they believe they would be in a  good position to build a standalone function room. With the economy as fragile as it currently is, Dunmore East badly needs the Haven Hotel to stay open and expand into the future.”