Over 2,300 supporters go the extra mile for Solas

THE goodwill on Gladstone Street as over 2,300 predominantly orange clad runners and walkers set off on last Sunday’s Solas Cancer Support Centre Run and Walk for Life was soul nourishing.

The showers relievingly stayed away as the sun shone over Waterford city and whatever breeze circulated proved most forgiving. It was about as good as day as one could hope for when lacing up the runners for a bit of a gallivant in support of so worthy a cause.

Over 2,300 participants were officially sent on their way by City & County Mayor John Pratt, negotiating a 10-kilometre route which took the field from the city centre to the Park Road finish via Ballindud, Farronshoneen and John’s Hill. Thousands more had offered their support – along the route were dancers, drummers, pipers, supporters in fancy dress, former Mayor and Outer Ring Road steward Cha O’Neill, homegrown Olympian Ciaran Power and thousands of well-wishers.

During the race, those honouring a loved one, chasing a time along with a sense of self-fulfillment urged each other towards the finish line. It was an energy level this city could do with harnessing, the sort of enthusiasm which made the Solas Centre itself leap off a blueprint and into welcome, wonderful operational life.

“The atmosphere on the day was electric and it is wonderful to see what this event means to all who take part in it,” said Solas Centre Chair Dee Jacques.

“The first event took place in 2008 and it has been supported by the people of the South East every year since then. We really appreciate the efforts made by all who took part in raising funds for our services. We are extremely thankful to our event partners, Datapac and Beat who are so loyal in their continued support and also the hard-working Run and Walk for Life voluntary committee, volunteers and stewards who give so much of their time and expertise to this event every year.”

One group who didn’t wear the customary orange event colours were the Solas Centre’s ‘10 For 10’ group composed of centre service users now thankfully in recovery from cancer.

Over the past five Mondays in the build-up to the event, the group were literally put through their paces by WIT Arena Fitness Coach Shane Dineen, as they built up their stamina in advance of Sunday last. Aided by a discount on new footwear kindly offered by Darryl Hale of Alfie Hale Sports, the black tee-shirted group completed the event to their collective delight and were greeted at the finish line by their respective families.

“It’s been great meeting the lads over the last few weeks,” said group member Eoin Fanning. “It was a lovely experience and it was brilliant to end up sharing the day the way we did.”

The Solas Centre opened its doors only eight years ago, which is hard to believe given how quickly it won a place in the hearts of both Waterfordians and our neighbours.

Most of us have some awareness of the Centre’s services for those with cancer, those in recovery and how it also reaches out to the families of those impacted by cancer. Every year, this event gives the general public a chance to support a service whose worth exceeds the monies required to keep its doors open. It’s also a way to say thank you to the staff who do so much for so many. Long may that remain the case. 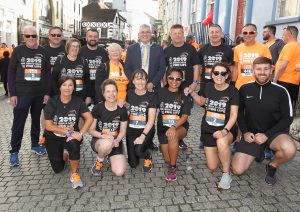 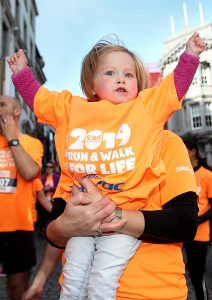 Summer Power was the star of the warm-up before last Sunday’s Solas Run & Walk For Life.