“We were like Ireland after coming home from the World Cup!” 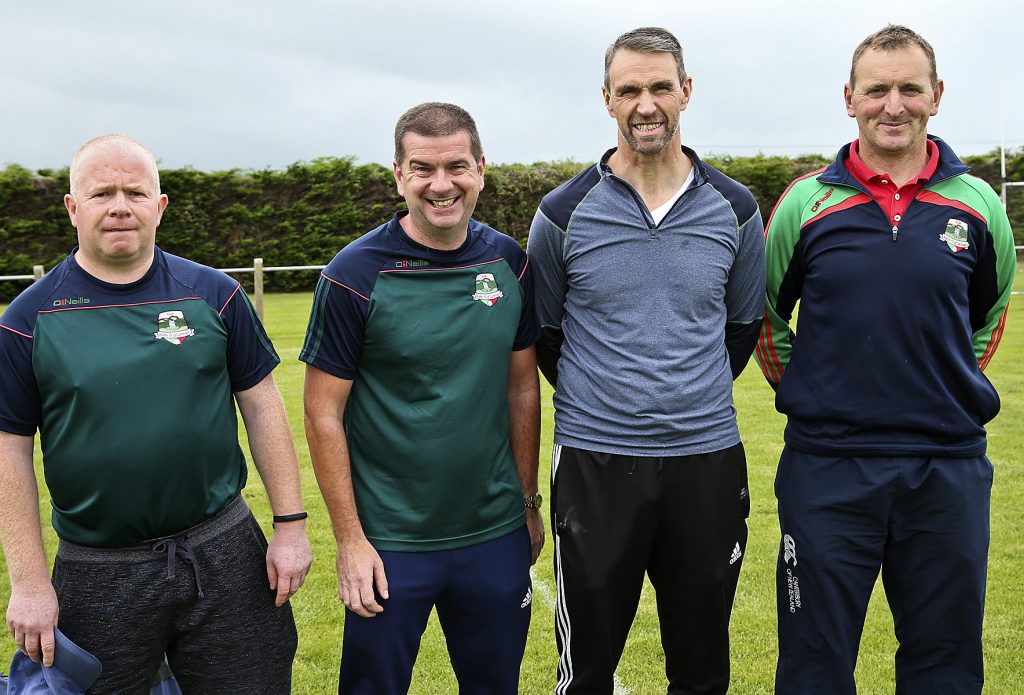 Rathgormack were a Power packed outfit during the nineties.
In 1995, when they won their first senior title in 77 years, five brothers filled jerseys on the starting fifteen. Declan and Kevin in the full back line, Martin at midfield as well as Sean and Ger up front. And not forgetting cousin Richie at centre forward.
The homecoming, after beating Kilrossanty in the county final, will live forever in the memory of Ger who will manage the team on Sunday. “We were all told to park down at the creamery in Rathgormack. All the players parked down at the creamery and one of the local farmers Jim Kirwan, he has three sons on the panel now, got a tractor and a silage trailer and we were all loaded into the back of it! We came up through the village and there was music blasting. Nobody around had witnessed it before; we hadn’t won it since 1918. All the people in the village were roaring and cheering us on. We were like Ireland after coming home from the World Cup!”

‘WE GOT GREAT SUPPORT’
People from surrounding areas joined in the festivities. “The neighbouring clubs came in celebrating with us. The South Tipperary clubs as well, Carrick Swan, Davins and St Mollerans. We got great support; everyone was delighted we won it.”
It continued into the next day. “The Monday morning after we won it, I woke up and looked out the bedroom window and there was Martin coming across to my house and he was singing to himself! This was nine o’clock in the morning after being out all night!”
Rathgormack had lost the 1992 decider to Dungarvan after a trilogy of matches. The championship wasn’t completed until February 1993. Michael O’Donoghue was the missing piece of the jigsaw when Power thinks back. He was recruited as coach for the 1995 campaign. “John Crotty took over the team and he asked myself and my brother Martin to come with him and we called down to Michael O’Donoghue’s house. Michael O’Donoghue was a teacher at the Christian Brothers school in Carrick. He was after coaching us in school, a really good coach. On the spot, he said he would do it because he knew so many of the Rathgormack fellas. He brought a huge finesse to the team in terms of the way we played. Danny Crotty had huge work done in terms of fitness and hard work. Michael O’Donoghue came in and put the finishing touches to it.”
They went on to defeat a star studded Gaultier team in 1996 and a young Stradbally side in 1999. Their half back line of Dan Crotty, Brendan Curry and Denis Hassett was respected right across the county. “They were the one constant. You’d often hear Jackson Kiely speak about that half back line. They were ever present, nobody budged. They were there for years.”

FINALS DRIED UP
Their last final appearance was in 2001, when Stradbally won the first of five county titles in a row after a replay. The drawn game, which ended four points apiece, should never have been played. “2001 was a horrific day,” Power recalls. “There was horrendous rain that morning, the pitch was completely waterlogged.”
In Munster, they rattled reigning All Ireland champions Laune Rangers in November 1996. They drew 1-5 each at Fraher Field, with Power kicking the equaliser in the 58th minute. “We should have beaten them. We were better than Laune Rangers but we just didn’t have as much self-belief as they had. I’m fully convinced we had better players than them.”
The replay in Killarney was a nightmare. “The big mistake we made was we went down the night before and stayed the night before. Something we had never done. We had a meeting about it after the drawn game and I said to everybody ‘let’s not go down there, let’s sleep in our own beds.’ We stayed in Castleisland, in the hotel, and there was music blasting the whole night long downstairs. I was nearly going to get up out of bed at one stage and cut the bloody wires! I couldn’t sleep. I got up the next morning and we were all wrecked tired.”

‘A BIT OF BELIEF’
The visitors led four points to one at the break but the legs got weary and they didn’t score in the second half. Rangers, with John Evans in charge, advanced to another provincial final by eight points to four.
The semi final win over Stradbally two weeks ago has given the class of 2019 the confidence boost that the green and red can rule the roost in Waterford once again. “We try to convince ourselves all the time that we’re good enough to compete with the Big Three. Until you actually do it; you don’t really believe it. Hopefully that will give us another little bit of belief.”