Wildcats make it three wins out of four against Killester 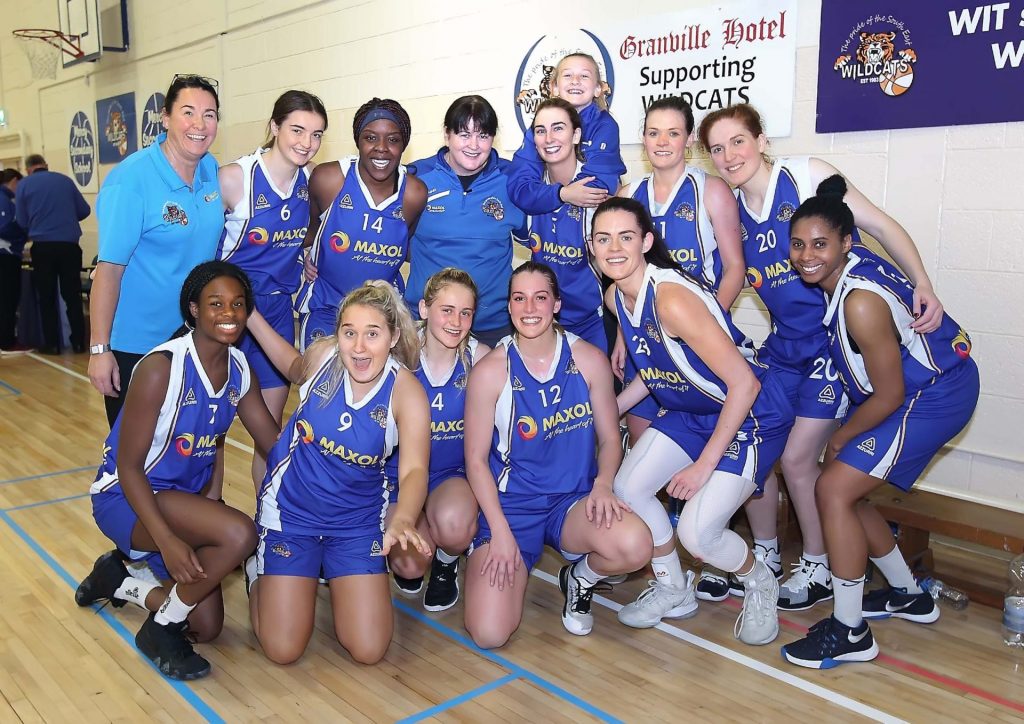 The WIT Wildcats team and management pictured after another great win in the Mercy Sports Hall on Saturday night. Photos: Noel Browne.

Waterford Wildcats shook off their away loss to unbeaten DCU with a nerve tingling victory over Dublin side Killester last Saturday night. The game was played at blistering pace with the result hanging in the balance right up to the final buzzer.
The visitors got off to the perfect start leading 15-12 after the first quarter but had an eight point advantage in the early minutes before a brace of scores from co captains Jazz Walker and Steph O’Shea.
Wildcats were forcing the ball inside and had little return for their efforts because the Killester defense stood solid under the boards as there was no outside threat from the home side. Things got better for Wildcats as the game went on when Maria Palarino blazed consecutive three pointers. Helena Rohan and Debbie Ogayemi added to Wildcats total as they went to the break leading 36-31.
One wildcats score that stood out was when Abbey Flynn rebounded and drove the length of the court weaving through the Killester defence before dishing off a superb pass to fellow 18 year old Ogayemi who finished in style .
As the game progressed every Wildcats score was matched by wonderful scores from Killester’s two Americans Adela Randell and Crista Reed who notched up 40 points between them. But last gasp baskets from Cathy Kavanagh and Steph O’Shea left Wildcats six points to the good leading 61-55 as the game went into the final quarter. A three pointer plus a bonus shot from Sinead Deegan extended the difference to 65-55.
Gradually Killester ate into Wildcats advantage picking up several points on the free throw line as the Wildcats defence lacked focus and discipline. With just two minutes left to the final buzzer a single point separated the sides 67-66. The visitors had a couple of long range efforts miss the target before Jazz Walker swished a vital three pointer that put the required distance between the teams at the games end. Final score 71-66 was a deserved home victory for Wildcats who now have three wins from their four games to date. WILDCATS SCORERS: Steph O’ Shea (18) Jazz Walker (15) Maria Palarino (14).

UP NEXT
This weekend is reserved for the National Cup first round. Wildcats are not involved as the got a bye in the cup draw and will meet the winners of Glanmire and Liffey Celtics in four weeks time. This will be a away fixture for Wildcats who will meanwhile focus on what will surely be another another thrilling encounter as newly promoted Maree BC from Galway come to the Mercy Sports Hall. The pride of the West were sensational last season going unbeaten in both division one league and cup. Like Wildcats they are off to a superb start winning three from four at top level. Tip off on Saturday November 2nd is 7pm .