“INSIDE each of us is a natural-born storyteller, waiting to be released,” according to author Robin Moore. Such a sentiment readily applies to jack of all trades, father of eight and devoted husband Michael Clarke (76), a Congress Place native who now resides with his wife Mary at the Waterside.

“I was only a young fella when I worked here as a porter in 57, 58,” a glint-eyed Michael tells me over a cuppa in the Granville Hotel.

“Miss Wyse was the Manageress, I think she was from Tipperary. Tommy Hutchinson was the head porter, Willie O’Keeffe was the night porter, he was living in Slieverue, Glenmore and he’s still with us thank God; I see him at Saint John’s Church with his wife now and again when I do go to Mass. It was a good place to work, 30 bob a week, live-in if you wanted to but I used to go home, sure Congress Place was only up the road, really. You used to get a few old bob from tips too and when Christmas came along, sure you’d have had all the staff down from (John) Hearne’s – my father worked there after being over in Paddy Knox’s (in Kilmacow) – the bar would be packed and we used to give an auld hand, in and out with drinks and so on. Sure might end up with thruppence of a tip or even a bob, sure it all added up.”

“My father and mother couldn’t speak nor hear,” he explained. “My Dad had to live with that from the day he was born; my Mam, I think, could hear when she was young but before we could even read or write, you could say we had our own form of sign language at home. If my mother, God be with her, wanted me to put on my hat, she’d used her hands to show what she wanted. Same with my Dad. Myself and my sister Mary went up to Ballinasloe on a school holiday because my father, God be with him, had connections there; his brother Pakie made his money during the (Second World) war selling car and bicycle tyres and he’d a farm up there. My father had sisters who couldn’t speak nor hear. When I was 10 or 11, one of them gave us a card with sign language on it with the ABCs on it so we learned that and we were able to communicate better with our mother and father then. But what was on the card was no good to you unless you can spell. It might have taken a few minutes at a time to get the right letter when we started off, but as the years went by, we got a bit faster. It was a decent help for us all at home.”

Michael, who attended school at Philip Street (run by the Mercy Sisters, featuring Mother Anthony, “a lovely nun”) and Mount Sion (“a few of the Brothers weren’t too Christian”), was inclined to go “on the duck – up the country they called it mitching”.

He added: “I wasn’t too keen on school, to be honest, so off I went. There was a bicycle shed in behind Batterberry’s public house, where all the country lads in the school used to leave their bikes – and there was a lovely apple tree there at the time. And I used to take a loan of a bicycle around half nine and I used to have it back before one o’clock when the lads would be coming out. Then I’d go back around a quarter past two, get the bike again, head off out the New Line, the Skibbereen Road, up Gracedieu, up by the ‘Rusty Tracks’ and so on and have it back before four o’clock.”

The working life proved a much better fit for Michael than his schooling, which ended before his 14th birthday. He earned his first corn as a messenger boy, followed by portering at the Granville and a stint at Collins’s Slaughterhouse on The Glen on a site now occupied by the Aldi supermarket.

Come the early 1960s, Michael crossed the water and, with a Granville Hotel reference in his back pocket, found work as a porter in the Hotel Stuart in Richmond, eight miles from central London.

“I’d a uniform, brass buttons, the whole lot. Talk about looking the part! Well, I was on duty one day, I was called to the reception and asked to take this young lady to her quarters; she was just after getting a job there as a chamber maid and waitress.”

Michael’s eyes lit up as he described his first encounter with the woman he would later marry. “My God. Well, I carried her bags up the stairs and all I could think was, God bless us, she was a beautiful girl. And I remember what she was wearing: white high heels, a blue skirt and a blue top with a white trim. And she had a basket in the shape of a Viking ship, a white handbag and she’d jet black hair done in the 60s style of Cilla Black or Sandy Shaw. So I asked her where she was from and she had an English accent at the time; her parents had emigrated from Castleisland. Now, me being the bit of a greenhorn says ‘where’s that?’ ‘Kerry,’ she said. I started chasing Mary (nee Broderick) after that and, thank God, we got together.” They married on February 16, 1963 and would have eight children, namely Alan, Johnny, Michael, Tony, Debbie, Linda, Lisa and Sharon (“and she’s living in Congress Place now!”)

“In the early 70s, we came back and made for Castleisland – Mary was expecting Johnny – but work was hard to come by down there. Waterford was flying with the building at the time – the industrial estate was expanding big time – so once Johnny was born I told Mary I’d go to Waterford, get a job and sure we’d have a few bob. And that brought us all back to Waterford.”

Within a day of returning to Waterford, Michael, with his own shovel in tow, was put to work at the Woodlawn Grove building site on the Cork Road before eventually winding his way back to Collins’s Slaughterhouse. “I was always a slogger, a labouring man and proud of it,” said Mick. “I was never afraid of getting my hands dirty. And I’d six years in Collins’s before the whole operation collapsed. They were a great bunch of lads to work with. I’d a few health problems by that stage and that was the end of work for me. But there’s always been bits and pieces to do at home and I’ve a Labrador and a King Charles to look after all the time. Myself and Mary go off for a spin in our Yaris and sure that keeps us occupied.”

Over the years, the Clarkes lived in Ballybeg, Lisduggan and one of the ‘Railway Houses’ in Sallypark until the row was demolished in the mid-1990s, before the Waterside became home for Mary and Michael. They’ve been there ever since.

If the ‘Pearly Gates’ do exist and if the maker enquired of his aspirant entrant regarding the satisfaction of his innings, what would Michael Clarke offer in reply?

“I’d tell God I was happy. I’d thank God that I met my beautiful wife Mary in the Stuart Hotel in Richmond and that was a very, very lucky man. We had four boys and four girls; we’d done our bit and couldn’t do no more. And I hope I won’t be killed for this one, but if Charles J Haughey and all them fellas are in there beyond those gates, then I’ll be tore in!” 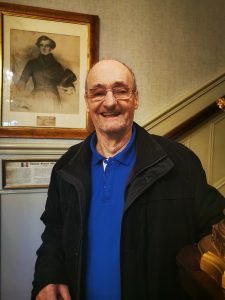 Work has taken Michael Clarke under the wing of several employers, including the Granville Hotel, where he worked as a porter in the late 1950s.