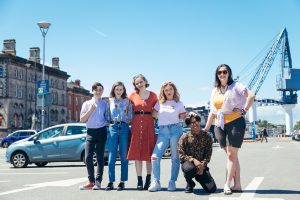 THE Lit Festival returns for its third year this November 15 and 16, promising to top the success of last year’s festival. Member of the Lit Committee, Isobel Tiernan attributes the appeal of the festival to its originality as, “A reading and writing festival for young people which is unique because it is run by young people in Waterford.”

The festival, which grew out of the Waterford Youth Arts, started with around 20 people on the committee, reducing to its present number of nine as the festival took shape over the past three years. This year, literary names such as Dave Rudden, Sarah Crossan and Sarah Maria Griffin, together with the weight of Laureate na nÓg behind The Lit Festival, means that this year is shaping up to be a defining year for the committee and the future of the event in Waterford.

Members of the committee had the exciting opportunity to attend the Children’s Book Conference in Dublin and news of the Lit was well received by those in attendance. Important names at the event, “knew that the Lit was this new, innovative young festival”, highlighting the far reaching power of social media, reputation and indeed the buzz around the wealth of artistic endeavours in Waterford.

All authors this year who are participating in the event were specifically approached based on their ability to inspire young people and, particularly in the case of authors who are holding workshops, able to “facilitate a safe space for young people where they can create freely”. This provision and development of a safe space is central to the aim of the festival itself, which as Isobel Tiernan points out is key to the development of all young writers who want to either read their work aloud or need that safety to just put that pen on the page.

Dublin writer, Colm Keegan has played an enormous role in the development of that safe space for young people in Waterford, which is free of judgement, returning each year to facilitate a workshop, which sees faces return each year to attend.

“Even if you aren’t a writer, even if you don’t like writing, even if the only creative writing you have done was in the Junior Cert, the Lit is an opportunity to be part of a vibrant energy in a community of young people who all encourage each other.”

That community of young people started with a committee of 20, who “didn’t even know how to write emails” and “hadn’t a clue about how to run a festival” but with the growth of the festival into a literary brand, the skillset and confidence of each committee member has grown too, giving the festival a proud family feel. Isobel, an aspiring journalist, writes to further her career prospects and she acknowledges the role that writing plays in fostering relationships and supporting mental health.

Workshops and events take place across the two days geared at every skill level and writing level, from the application based, “We are the Poets Masterclass”, to “A Reading of New Work” by local writer Rose Keating. The events tackle monsters, voices, women and lunch across the two-day festival. Tickets can be booked on www.thelit.eu, in conjunction with Waterford City and County Council, Libraries Ireland, Poetry Ireland and Waterford Youth Arts.

An Irish ‘lock-in’ at the Rhu Glenn