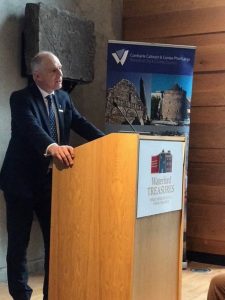 A MIGRANT integration forum to promote the integration of the migrant population in Waterford was launched earlier this year in line with the National Migrant Strategy. Up to 2016, 9.9% of the Waterford population was recorded as having a nationality other than Irish, with the likelihood being a much higher figure today.

Waterford City and County Council and the Local Community Development Committee are now obliged to produce their own local version of the national strategy, fine-tuned with regards to the Waterford migrant community’s individual circumstances. The strategy both locally and nationally aims to create an integrated and inclusive society whereby migrants are given every opportunity to lead full lives and to contribute to Irish life and society. Consultations are ongoing in the city and county with migrant and host communities with the aim of creating an evidence based strategy locally.

Of a total grant fund nationally of €526,000, Waterford projects received €24,700, with the Waterford Migrant Integration Forum being awarded €5,000.

Two public consultation meetings will be held on Monday, November 4 in the Granville Hotel, Waterford City at 7pm; and on Tuesday, November 5 in Lawlor’s Hotel, Dungarvan at 7pm. These public consultation meetings are designed to provide information publicly, to generate public feedback and to further facilitate surveys of first and second generation migrants who live or work in Waterford.  A second survey is available which is open to all and which aims to measure attitudes towards the diversity of nationalities and ethnic groups in Waterford. All surveys are completed anonymously and aim to highlight the welcoming nature of Waterford but also to address any instances of racism should such a need be identified from the survey results.

“We look forward to working with the Forum in improving our services, appreciating cultural diversity and to achieving our goal of making Waterford the best place for those who live, work and choose to visit our county,” said Ivan Grimes, Director of Services Housing, Community and Emergency Services. The results of these surveys will contribute toward a local strategy aimed at integration, inclusivity and understanding between all nationalities, ethnicities, languages, faiths and cultures.

Development to proceed despite claims of ‘horsing people’ into apartments