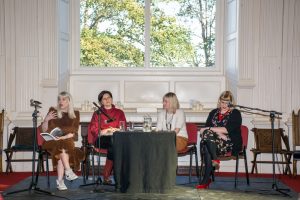 CAT Hogan, curator of the Waterford Writers Weekend said to this reporter on Sunday that the power of a small festival is that you can see the writers who are taking part and you can approach them on the street or in the cafés. This weekend for many, that writer was Jan Carson, the East Belfast author of The Firestarters, who in a distinctive green coat and flame red shoes was seen all around the city. In conversation with Rick O’ Shea and author Ian Maleney in the Book Centre on Saturday evening, both writers spoke of identity and language being explored through writing and of major importance was the idea that sound and words could capture the vibrancy of a city and the very fabric of a person or a character. The potentially devastating ripples of Brexit on identity and security crept out of Jan Carson’s interview when she said “I am proud to be an Irish writer and to have an affinity with the Irish writing tradition and I resent that Brexit is making me choose”. Similarly Ian Maleney painted a rather dismal image of migration from Dublin, calling it a “profoundly messed up city” owing to high rental properties and cost of living. Two different cities were compared and contrasted with the result being a strong argument for art being shaped by the culture of the city. This allowed the Waterford Writers Weekend to raise some interesting questions and for a connective thread to weave through each event, where identity and roots were explored by those taking part and also by those attending. Amongst those in the audience at this event were writer and co-founder of Tramp Press, Sarah-Davis Goff, writer Caroline Farrell, writer Arnold Thomas Fanning and a sea of faces from the literary world. Cat Hogan was spot on when she said that small festivals open up a world of possibility to those in attendance because being able to sit in such close proximity to such literary successes, was inspirational, motivating and when Jan Carson announced that she would be spending Christmas “killing off children” as part of the editing process of her new 2021 title, the audience were allowed into the intimate world of a writer.

That idea of identity featured in Momo early on Sunday morning when self-professed writer and psychopath Sarah-Davis Goff and poet Sarah Clancy opened the floor to questions of feminism and the importance of immersing yourself in the right kind of culture and surrounds because “like any good psychopath, you can only be inspired by what is going on around you for so long before you have a go yourself”, in Sarah Davis-Goff’s case, by writing a piece of work aimed at young adults where a young woman needs to use her strength, dexterity and physicality to survive the end of the world and to rebuild herself. That sense of rebuilding and of being aware of one’s own identity was present all weekend, an undercurrent under the vibrancy of each event.

Waterford father and daughter Jim and Megan Nolan drew enormous crowds on Sunday afternoon to the Parlour Vintage Tearooms with not a spare seat for a stray listener, such is the respect which they garner on their home turf. In an intimate library room across the hall from that full room sat the red-stilettoed Jan Carson as she gazed out the window onto the steady stream of foot fall passing and typed a flurry of words on her silver Macbook. Such a variety under one roof, set against the backdrop of the glamour of the Vintage Tearooms was just one pocket of the spectrum of artistic wealth in the city. The weekend ended with in the cavernous beauty of St Patrick’s Gateway Centre where Belfast writers Jan Carson, Wendy Erskine and Shannon Yee discussed their version of Belfast, which shaped, loved and scaffolded them throughout their lives and how the changing face of Belfast and the North of Ireland is affecting their sense of identity. Arriving early at each of these events showed the empty seats and the insecurities which plagued so many of the writers, many heard to echo “I hope the seats fill”, “I hope some people come to see us”, and they did come, and the seats did fill but the endearing insecurity bridged a gap between them and us, the chosen and the ordinary reassuring both parties in doing so. Cat Hogan made some very astute choices, the selection of writers there represented some of the finest in literature today and each had something very important to offer to the fabric of our society in the exploration of identity. Next year promises to be packed solid with names and events but Cat Hogan, if she does not reclaim her curator throne will be a tough act to follow.