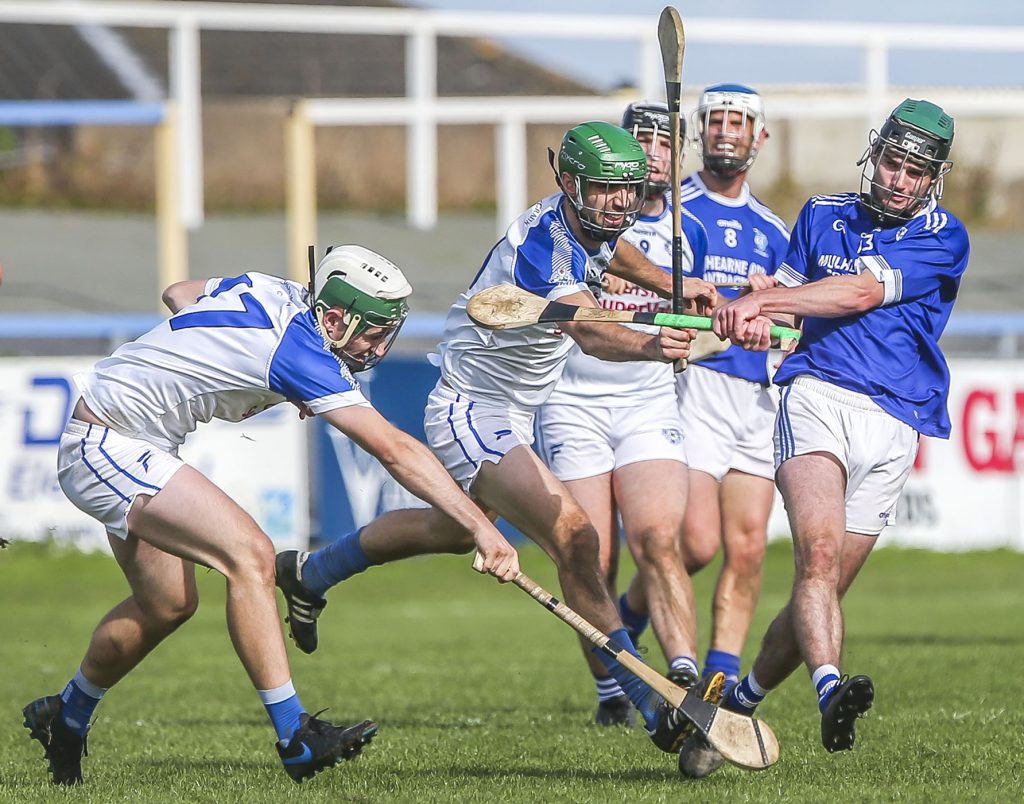 Ballydurn’s John Sheahan has his shot blocked down by Tramore’s Martin Whelan and Shaun Hincks in their Eatern Final win. Ballydurn will be looking to join the intermediate ranks on Saturday. Photo: Maurice Hennebry.

Rewind thirty years to November 1989 and the one and only time Ballydurn and St. Marys met in championship combat, that being the County Junior Hurling final of that year. On that occasion, in a stirring contest, the Touraneena men achieved a famous double adding the hurling title to the Junior Football title captured a week earlier, emerging victorious on a score of 1-6 to 1-4. Now, on Saturday next, the same clubs return to the scene of that epic encounter, each seeking to erase the memories of painful final defeats in recent years.

TWO EXPERIENCED SIDES
This will be St. Mary’s third final in this decade. Having lost to Fenor by a single point in the 2015 decider they went down to a strong Ballyduff Lower side the following year. The arrival of Ardmore on the Junior scene in 2017 stopped St. Marys from taking a third successive Western title and last year it was Ballinameela who came out of the West.
With Ardmore and Ballinameela having departed the Junior scene the door was open for St. Marys to challenge strongly for the Western title once again and they did so, impressively, defeating a strong Colligan side in the semi-final before defeating a fancied Abbeyside second string in the final on a score of 1-14 to 0-9.
St. Marys retain most of the players who featured in those narrow county final defeats of 2015 and 2016 marking them down now as a more experienced outfit. In goal they have experienced former county player J. P. Fitzpatrick fronted by very solid defenders in Denis Coffey at fullback and former Down senior Brendan McGourty at centre back. In attack J. J. Coffey leads the line at centre forward with the Kearns brothers Eoin and Mike always figuring strongly on the scoreboard as does Kevin Sheehan. A big addition to the team since transferring from Tallow two years ago is former county senior star Aidan Kearney who is capable of filling any position in defence or attack.
Like St. Marys, Ballydurn will field almost the same fifteen that suffered a crushing defeat to Ardmore in the final of 2017. In going on to win the All Ireland title Ardmore showed that they were a cut above any Junior team in Waterford that year and their departure has left the Junior scene a more even playing field. Ballydurn lost out narrowly to Tramore in last year’s Eastern final but bounced back this year to take revenge by inflicting a heavy defeat on the defending champions in the Eastern decider.

NOT MUCH IN IT
There can be no question but that Ray Barry has moulded this Ballydurn side into a much improved model to that which lost out to Ardmore two years ago. The hard core of experienced players such as Richie Kirwan in goal, Andy Hubbard, Darren Long, Ger Dunphy, Michael Power, Shane Behan and Paul Cummins are there and playing better than ever but it is the form of younger players such as Conor Flynn, Conor Burns, Conor Keane, John Sheahan and Niall Dunphy that has been most impressive this year.
Like Ray Barry, Dan Shanahan will have St. Marys very much up for this test and we can expect a good hard game of open hurling. It is a very difficult game to call as there does not appear to be much between the teams. Neither side will want to go through the pain of suffering another final defeat and will be highly motivated going into this game. Having been impressed with the improvement I have seen in Ballydurn this year I would give them a cautious vote to reverse the result of that 1989 final by the narrowest of margins.